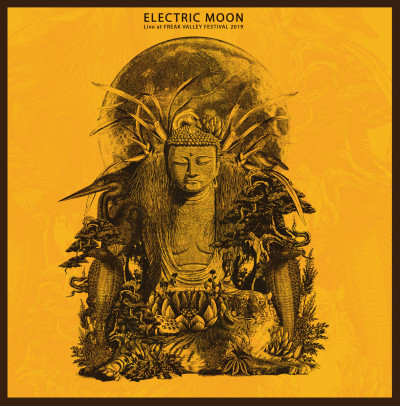 All too often, a live album can get away with pretty much anything in terms of visual design. A stage shot, random punters, even just chucking on a band logo with ‘Live at Wherever’ in Comic Sans, all of these can suffice (though the last might be pushing it) in terms of what usually amounts to a cheapo release to keep money coming in while waiting on new studio output. And then there’s Electric Moon. Their live output is arguably more important than their studio work, a vivid replica of their finely-tuned sonic energy, and so the choice to adorn this album with an ornate image of the Buddha, serene and surrounded by tigers and cobras with the moon looming large behind them is near-perfect, capturing not just the trio’s otherworldly presence but the natural savagery they display when the amps are cranked all the way up.

‘Increase’ takes a while to take off, just like any good rocket ship, and Komet Lulu’s basswork is the propellant. It simmers and bubbles, keeping steady pace with Pablo Carneval’s flighty beats trotting not far behind. As it picks up in tempo and volume, so too does their guitar guru Sula Bassana, at first content just to add texture before imperceptibly surging forward. Within five minutes, it is a full-on gallop, a kosmische explosion of melody and dissonance, with Bassana on blistering good form as he lays down one sublime lick after another, rising up in urgency then sinking back into a hazy fugue state as the epic cut finally lands.

Conversely, ‘777’ starts out on a high note, a bright and funky wah-drenched riff accelerating from 0-60 in seconds. All three straight-up attack this number, Komet Lulu’s bass dominating the mix with forceful insistence, and it truly cements Lulu’s importance within the trio, providing structure, space, tempo and, more importantly, groove, without which the whole structure would collapse. Carneval keeps things tight and steady, throwing in one light-speed fill after another whenever the song gives him room to move, but as the tempo picks up all three seemingly turn off any restraints they had. There’s a lengthy burst of chaos that feels like staring into the heart of the sun, an explosion of heat and energy that simply obliterates everything surrounding, and when it dies out, sliding into a muggy trance-like mantra, it almost feels like sweet release.

While the first half on Electric Moon’s set focuses on a naturalistic sense of progression, ‘The Picture’ feels mechanical in comparison. This isn’t to say it feels rote or uninspired but rather there’s a rigidly structured approach to the build-up that borders on malevolence, Lulu steady and unrelenting while Bassana gradually shifts from strident automaton to malfunctioning sonic weapon, becoming more frenzied until he reaches full-on meltdown, all frazzled strings, blown amps and exploded minds. It’s thankful, then, that ‘D-Tune’ is possessed of such innate humanity that any thoughts of the German threesome being robots in disguise goes out the window. A confident raga jam that pushes Sula Bassana’s most ecstatic guitarwork to the fore, it’s a shining example of why instrumental bands as often more expressive than their language-constrained counterparts. The riffs don’t just sing, they scream and murmur and exalt, each shift from delicate intricacy to distorted tremolo a poem in and of itself.

Less a distinct piece than a final exhalation of breath, ‘Der Mondsenator auf dem Weg Zur Erde’ is brief moment of introspection, a comparatively kicked-back jam that manages to dissipate the energy and chaos of the hour that has preceded it. It’s the most fitting comedown to a truly electrifying performance and even if you’re not feeling particularly zen when you set off on Electric Moon’s journey, it’s almost guaranteed that after sitting through this you’ll come out changed.