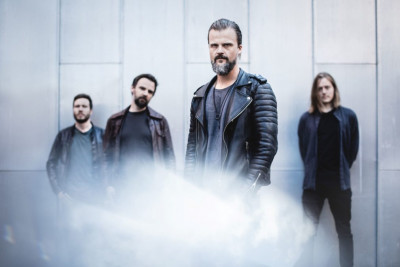 We like to think of ourselves as a band who draws inspiration from the past while racing towards the future.

White Void have just released their debut album Anti and its melding of 70s occult rock, 80s hard rock and the British New Wave movement is an intoxicating mix of musical styles that transforms the listener with its blend of catchiness and darkness. They are the newest band of Lars Nedland who provides vocals on Anti and Gavin Brown had a chat with him to hear all about White Void and Anti and the videos and visual element of the music as well as what  his other bands Solefald and Borknagar have coming up and how he fits all his musical projects in.

E&D: Your debut album Anti was released recently. How does it feel to unleash the music of White Void onto the world?

Lars: It feels very good. It’s like the end of a long journey. So much work went into this, so it’s really good to finally get it out there for everyone to hear.

E&D: How did the creation and recording process of the album go?

Lars: The whole process started with some songs rooted in seventies hard rock and eighties new wave that I wrote all the way back in 2017. I soon realised that this was something different from Borknagar and Solefald, so I wrote more songs within that same framework thinking of forming a new band to pursue this style. I always adored music from the seventies, and I have had an urge to explore my own ideas connected to that for a long time, so I went for it. After having written the album, I gathered the musicians I needed to work with my new, musical expression. Eivind, our guitarist, was the first to join, and instantly set out to rearrange my riffs in his very individual seventies-style. Our drummer, Tobias, was the next one to be included in the fold, adding his progressive drumming to the mix, and through him, Vegard, our brilliant bass player, came into the band, adding a whole new platform to our sound.

E&D: Has it been a challenging task creating this album with the whole world in quarantine for the past year?

Lars: No, we had recorded most of it prior to the pandemic, so we mostly mixed and mastered it in 2020, and that didn’t cause a lot of problems for us.

E&D: The songs on Anti are very anthemic and atmospheric, was that what you wanted with the music of White Void?

Lars: The two main inspirations for White Void is the occult rock of the seventies and the new wave of the eighties, so I wanted to merge the two and create a musical expression that looked in the rear-view mirror without just being straight up retro. I aspired to make a mixture of energy and atmosphere, old and new: We like to think of ourselves as a band who draws inspiration from the past while racing towards the future.

E&D: You’ve just brought out the stunning video for the song ‘The Shovel And The Cross’. Can you tell us a bit about the video and its creation?

Lars: Yes, I had the idea of making a video with my face literally falling to pieces, so I teamed up with some very talented motion graphics experts, special makeup artists and photographers / editors to make this idea come to life. It took a lot of time and effort to get it done, but the result became pretty spectacular.

E&D: You’ve also done videos for the album tracks ‘This Apocalypse Is For You’ and ‘Do. Not. Sleep’. How was the experience of creating these videos?

Lars: ‘Do. Not. Sleep’ was the joint effort of a dedicated studio crew, an excellent motion graphics artist and two brilliant postproduction specialists. We shot the video in one day, but a lot of work went into the postproduction on this one. The video for ‘This Apocalypse Is For You’ was fully 3d-animated by an amazing animator called Joakim Storsve and editor Daniel Øverland, who took inspiration from our cover and text universe and created these awesome 3d-models that served as the basis for what became a pretty unusual video,

E&D: What are the themes for those videos?

Lars: The themes for all of our videos and all of our songs is Absurdism, the philosophical direction shaped by Albert Camus. Some tackle the philosophy as a whole, others the implications it has on our daily lives. And some portray the process of coming to terms with the fact that existence in inescapably absurd.

E&D: Do you think that the visual aspect of the music of White Void is important?

Lars: Yes, I put as much effort into the visual side of White Void as I do in the musical side.

E&D: Was the music of White Void influenced by what music you loved before you got into more extreme music?

Lars: It was influenced by music I have always loved in parallel with my love for metal. I listen to a lot of different music. Black, pop, prog, electronic, classical, jazz and so on.

E&D: Who are the biggest influences on the sound of White Void?

Lars: The main musical inspirations for White Void, are occult rock bands like Coven and Blue Öyster Cult, New Wave bands like New Model Army and Duran Duran as well as progressive outfits like King Crimson and Gentle Giant, and this is music I’ve always listened to together with more extreme music.

E&D: How did White Void start as a band?

Lars: As I mentioned earlier, it all started with a few songs that were a bit different from the music I usually write. When I realized that this was a direction within my songwriting, I continued down that track.

E&D: Have you got plans to take White Void out on tour when it is safe to do so?

Lars: Yes, but it’s hard to say when. The plan for White Void right now is promoting the album as best we can. I’m sure there will be live shows at some point, but when we’ll play live is more of an open question as the Corona virus is still in effect all over the world. I guess this situation makes us turn our attention to creating music more than performing it.

E&D: Will Solefald ever do anything musically again?

Lars: Yes, we are working on new music as we speak.

E&D: What were some of the highlights from being in Solefald?

Lars: Solefald was the very first band I released albums with, so for me, I think the highlight was receiving that very first album in 1997. Being nominated for a Norwegian Grammy was pretty cool too.

E&D: Are there plans for a new Borknagar album to follow up True North that you can tell us about?

Lars: Yes, we are in the writing process right now, so we plan to start working in the studio in the foreseeable future.

E&D: What are some of the most memorable moments from being in Borknagar?

Lars: We’ve had some pretty awesome tours, and I think one of the very coolest ones was that of Latin America back in 2017. It was such a blast finally being able to play for our fans in Chile, Brazil and Mexico.

E&D: Do you find it a difficult task being in multiple bands at all?

Lars: No, not really. I’m a good planner, and I have pretty high capacity.

E&D: How was the experience of performing with Carpathian Forest and how did that come about?

Lars: Haha, yeah, that was a fun one. They were recording an album, but they didn’t have a drummer, so I came to their rescue. We were signed to the same record company at the time, so it was Roberto of Avantgarde Music who set that whole thing up.

E&D: Was the extreme metal scene in Norway quite a close knit community and does it continue to be so?

Lars: Yeah, Norway’s a small country, so the community here is pretty tight. I like that, it’s like a family in many respects.

E&D: How did you get into metal and extreme music in the first place?

Lars: I always loved all kinds of music and I’m an adventurous guy, so metal came to me through one of my many musical excursions. I still search for new music and new styles all the time.

E&D: What have been some of the highlights of your career so far?

Lars: There are so many different ones – concerts and tours in Europe and America, collaborations with other artists like Hail Spirit Noir and Funeral, creating albums and music videos, meeting fans and friends in all corners of the world. Music has done so much for me, I’m eternally grateful.