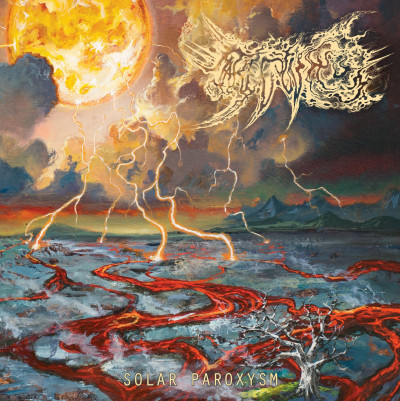 The reputation of multi-instrumentalist Jacob Buczarski has solidified over the past ten years with multiple astral masterpieces released by his vessel to the stars, Mare Cognitum. That flourishing reputation has gained him much praise within the expansive world of atmo-black and has made his music a pivotal force to be reckoned with. He has a universe of talent in his hands and is one of the many artists in the genre who tackles the vastness of space independently, writing, recording and mastering his own work. The genres of atmospheric black metal and blackgaze etc. are filled with bright solo stars such as Jacob, making this style of blackness one of the truest examples of pure magnificence in music.

‘Antaresian’ opens with dark swirling atmospheres that usher in a whirlwind of dizzying blastbeats and crashing hi-hats. Nostalgic hits of gothic and swaying Cradle-esque riffage are interwoven into the galaxy of beautiful solos and wailing, flailing and all hailing guitar cries that seem to call out to the farthest stars. The monster opener is capped off by a stunning blastbeat outro complete with gorgeous juddering tremolos that fade into silence. ‘Frozen Star Divination’ tirelessly ramps up the pace and is built mainly on a singular riff hook that’s carried epicly throughout the track under the bombarding assault of driving blastbeats. Jacob throws a curveball towards the end that touches on old school guttural death metal, which sees off the song to its conclusion.

The 10 minute dirge of ‘Terra Requiem’ slows the pace right down to a lamenting crawl of pounding doom-bringing drum beats and mournful, drawn-out instrumentation. Tremolos call out ominously as the atmosphere thickens with the gloom of desolation. These first three quarters of the track allow for some deep reflection until climaxing with a sudden burst of sonic blackness with blastbeats, sparkling synth notes and powerful riffs aplenty. ‘Luminous Accretion’ is a convulsive track with various tendrils shooting off into different musical influences. There’s plenty of metal inspiration to headbang to from blackgazing tremolos and charging old school moments to dancing Maiden-esque arpeggios and Nightbringer style flaying riffage.

‘Ataraxia Tunnels’ finishes off the album in blistering style with a frenzied storm of blazing atmospheric black metal with blastbeats riding waves of tremolo picking and high-flying arpeggios. The track sticks to a winning formula of repetition and utilises catchy riffage, dragging that hook-laden charging guitar section throughout the song to a satisfying, gravity-defying conclusion.

The riffs on this album are a big focal point and some of the hookiest you will hear this year. The guitar work will ascend you into the heavens with their sheer grandness and the contrasting blistering assault of blackened riffage hurtles towards you like a shotgun blast of shooting stars, consuming you in bright luminous eruptions and carrying you in a gut-punch of force back through the burning atmospheres of Earth. The melodies are sweet and scintillating and the solos are bursting with blazing character and expression. Couple this with unrelenting blastbeats, scathing vocals and extraterrestrial soundscapes and you have an album that will be forever woven into black metal’s rich tapestry.

The tracks themselves are lengthy and with good purpose, allowing Jacob to create a story through music, whether it be raging guitars or soaring solos and descriptive lyrics. The long-form compositions suit this style of music perfectly considering the colourful depth and nuances this genre offers. Black metal may be naturally dark but much of its sound is a supernova of free-for-all expression and intricacies… music that can immerse you, be absorbed by your soul and admired. Solar Paroxysm offers all this joy in spades.

Mare Cognitum is stunning cosmic metal with the ethereal tinge of blackgaze. This is black-veiled mastery ablaze with all the transcendent radiance of an exploding star. Solar Paroxysm is a ferociously beautiful release from a man whose star shows no sign of burning out.