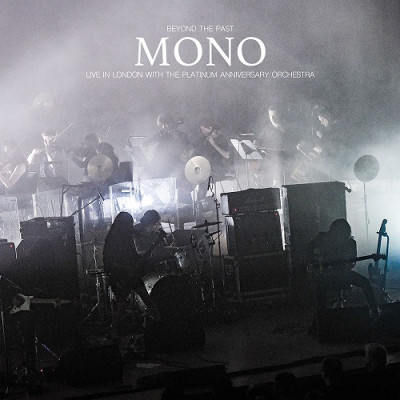 Beyond The Past by Mono

Mono of Japan celebrated their 20th anniversary with a concert at the Barbican Centre in London, performing with the Platinum Anniversary Orchestra, featuring National Youth String Orchestra, in front of a sold-out audience of 2000 fortunate souls. Beyond The Past is a stunning recording of this performance, captured by the band’s sound engineer Matt Cook and skilfully mastered by Bob Weston. The stellar line-up for this memorable occasion also featured fellow country folk Boris and Envy, French post metallers Alcest and also the UK’s A.A Williams and Jo Quail.

The show begins with the mournful tones of ‘God Bless’, familiar and welcome as they bring back memories of happier times. To a ripple of applause Tamaki Kunishi, Takaakira Goto, Hideki Suematsu and Dahm Majuri Cipolla make their way onto the stage. When the tumbling drums, glorious double onslaught of guitars and Tamaki’s magnificent bass rumble get ‘After You Comes The Flood’ fired up you know this recording is going to be very special indeed. You can sense the presence of the mini orchestra as the stringed hum rises up from the underbelly. Free of Steve Albini’s tight studio sound Mono get to really soar in the live setting and Dahm’s drumming gets a whole new lease of life.

The guitar tones and attentive playing on ‘Breathe’, when compared to the studio version is truly stunning and humbling, this is a band who play with an incredible sense of emotion. You’d never accuse Mono of going through the motions, every performance is given the same intensity and loving care, recreating their melancholic music. What you do notice here is Dahm’s urge to really get cracking, as ‘Nowhere, Now Here’ gets rowdy, the drummer is chomping at the bit to provide thunderous percussion and it really enhances the power of the wall of sound. When Takaakira and Hideki start to lay waste to their guitars, the energy is palpable and gloriously intense. I’ve stood right in front of this band in a tiny venue, ears pinned back by the hurricane of noise, I can only imagine what this might have felt like with the full sonic force of the additional musicians too.

Mono are absolute masters of their guitar effects pedals, the sheer intensity of the sound that is conjured up in ‘Death In Rebirth’ is unbelievable, the noise is akin to a jet engine and as the track ends in a blizzard of feedback and disintegrating distortion, you close your eyes and visualise the crazed flash of a strobe light, the sound of a collective of people enjoying themselves hits fucking hard. Being at a gig feels like such a distant memory. Sensing the thrill of an amalgamation of bodies enjoying incredible musicianship and performance is suddenly an intangible sensation to process. As ‘Dream Odyssey’ begins, I find myself weeping inconsolably…

In order to compose myself I take a momentary break from writing this review, on my return the next track is ‘Sorrow’, I find strange solace and comfort in the heart breaking melodies that wrap themselves around me like loving arms. It’s all going to be okay. One day, we will all get together again and Mono playing their emotive music is going to reduce us to an emotional mess, but we’ll feel intensely grateful that there are beautiful people on this planet and that we get to share some time with them. (Fuck I knew this was going to be a tough review, but not in this way!) Mercifully the end of ‘Sorrow’ rises up into a sheer force of strength as the guitars and drums raise to a tumultuous fury and that sequence of random synths bubbles away in the undertow of frenzied noise before skidding to an abrupt halt. That privileged audience whoop and holler in awe and appreciation.

The final track to be performed from last album Nowhere, Now Here is the mighty ‘Meet Us Where The Night Ends’ which gets torn asunder at the finale as the guitars and drums whip up to a stunning crescendo. Reaching far back into their incredible back catalogue, ‘Halcyon (Beautiful Days)’ sweeps down from the heavens to caress you with lovingly recreated strings and melodies of hope. The audience are in rapturous silence before that magnificent finale drops from the skies with majestic force, taking the weight of the world from your shoulders bringing it crashing to the ground. You feel free for a fleeting moment, of all your troubles.

The Mono classic ‘Ashes In The Snow’ gets the lavish treatment it so richly deserves, the orchestral backing raising the euphoric track to new levels of sonic excellence, especially in the latter half of the track where the sounds created are truly astonishing. The band never sound anything other than completely at home with such magnanimous accompaniment. The basic instruments of guitars, bass and drums absorbed yet enhancing the strings, as the noise levels dart in and out of the mix. The production on this album is sublime, high quality, yet retaining the potentially reckless edge of live performance. This band are so well drilled at playing from years of relentless touring, yet weariness never seeps into their ability to infuse raw emotion and intensity with every gig. I can’t imagine how this band must feel post-gig.

Not known for conversing much during their performances a solitary acknowledgment of heartfelt thanks for 20 years of support means a lot though, the sentiment is real, this music is these people’s lives. A.A Williams joins the band for a mesmerising and heart breaking, note perfect rendition of their recent collaboration ‘Exit in Darkness’. Finally the standard set closer ‘Com(?)’ blasts away all those earlier emotions and sadness by being a heavy and blunt force of sheer noise and metallic fury, you feel an inner strength and resolve to defiantly face whatever this world throws at you. As the band nudge the volume into apocalyptic levels the sound actually becomes ugly, twisted and violent, lashing out like some wounded multiheaded beast about to breathe it’s last breath. The final throes of this outstanding performance are handed over to the gods of feedback to do with as they wish. Remarkable.

I’ve experienced Mono perform twice, once in a tiny venue and the other occasion was in a bigger venue that had to be partitioned off. Each time bordered on a religious experience, such is the power and emotion of their music. Beyond The Past is a truly stunning album, here’s hoping we can soon be at one with these four beautiful souls once again.