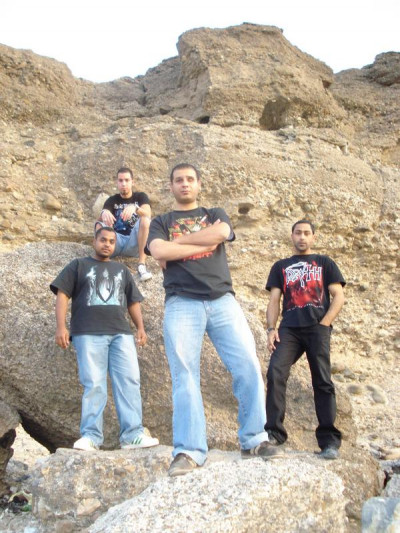 We tried to send our stuff to local record labels and they rejected us too, so we had no choice but to leave Oman for the UK because we wanted to be heard. Anything to make that possible, so we left.

Metal pops up all around the world, but sometimes you find the scene can be surprisingly small in some ends of the world. Oman has a grand total of two metal bands. And yes, I asked my interviewee about it and he’s adamant that this is probably it. I’m talking about Shabeeb Al Haremi, frontman of Arabia.

Shabeeb currently lives in the UK, and he doesn’t make a secret of the fact that metal was the reason for him to move. Not that Oman is that strict, there was just no scene. He was eager to tell me about Arabia and though I’ve redone his words (Shabeeb has had a car crash and only has one functioning eye, so writing is a challenge), I hope his love for the music shines through in his words.

Get ready to dig into Oman’s very own Arabia.

Hey, could you introduce yourself and tell me how Arabia got started?

My name is Shabeeb Al Haremi, frontman and founder of the black metal band Arabia from Oman. A nation in the Arabian Gulf and my bandmates names are: Tarik Al HaremI on guitar and Said Al Mahmoody on keyboard. And ex-members: Nasser Bahwan and Tarik Abdul Rahman.

What got you into metal music in the first place?

Well, I used to be in boarding school when I was 13 years old, and one day I met a fellow student, and he made me listen to Iron Maiden. The music blew me away, and I never heard anything like it before. It gave me a crazy rush inside, and when I went back home to Oman, I tried looking for the record that I heard when I was in school, but at that time, metal music was not known that well. I had a friend who used to go to Europe for vacations, and he got it for me, so when I went back to the UK, I started just buying all sorts of metal bands, which is how I went deep in the music. I just wanted heavier music, and that’s how I got in extreme metal. I never used to know the styles. Anything heavy? Just buy it! I fell in love with it ever since.

Arabia has relocated by now; what is the main reason for this, and where are you currently?

When we were here in Oman, I wanted to start a band, but there were no real metalheads at the time. So I tried so hard to find them, making flyers for in music stores and everyone who called me were into shitty stuff, like Bon Jovi and other bands that are nowhere near what I was looking for. Then I met Nasser Bahwan. At first, he liked things like Metallica, but I was trying to make music instead of playing covers, so we tried to do that, then my nephew got interested, and I started to teach him what I knew, and that’s the tritone, which others call the Devil’s note. When Said Mahmoody got amazed by the music, he wanted to try and join, and that’s how we first got together and just playing and nothing else than just making music. We got cheap recording equipment to build up the music and make a demo. It took so long to do, but we did it, and the recording was kind of fuzzy. After working so hard, we wanted to get gigs here in Oman, but everyone rejected us, claiming this is dark satanic music (Shabeeb finds this hilarious). We tried to send our stuff to local record labels and they rejected us too, so we had no choice but to leave Oman for the UK because we wanted to be heard. Anything to make that possible, so we left. That was in 2009. Now we are recording our upcoming album in Florida, Where Evil Lies. The other three, we did those in England.

Various bands from the Middle East have moved abroad, and some, like Saudi Arabia’s Al Namrood, stay put and work in anonymity against the ruling forces from within. What do you think about this situation?

Well, yeah. A lot did leave. It’s all because we are very passionate about music. Some bands from where I’m from had to do that. Others stayed in there because they couldn’t leave, such as Al Namrood. They’re good friends of mine. We met through the Internet, and they came over to see us for a couple of days. We had fun, but to me, they make their music by hiding and being low profile about it. But you know, metal is about standing your ground and doing whatever it takes to do what you love. In the Kingdom of Saudi Arabia, it’s strict when it comes to metal, but it’s a risk you have to take and not get caught. In Oman, it’s cool, but you won’t get support from many people. I think Al Namrood is very brave to do this, but it’s a shame that you get arrested if caught. They are doing a great job by mixing our Arabic vibes with black metal.

Can you tell me what concepts and stories you deal with in Arabia and what your origin means to you in the context of your music?

Well, the context of Arabia is based on Arabian wars. The past and the history of the invasions we had through the ages. This is basically what we sing about nothing against religion, or we would get in shit because we come from a Muslim country. Plus, we don’t believe in disrespecting any religion. Al Namrood is the opposite. They sing anti-Islam songs, and their music is about stuff from the Quran like their name. Namrood was the enemy of the prophet Ibrahim.

I understand in your music you put a lot of history and mythology. Can you tell me a bit about those stories or maybe give some examples for people like me not quite familiar with Oman and its past?

The songs that we have are about the past in Oman. Some are about when Portugal came and invaded us in the 1500s, and the mythology of our past was about the pagan gods the Arabs use to worship before Islam. The gods were kind of similar to the Vikings and the Romans. Not much difference, but they don’t have a real storyline, like how the other mythologies do. Stories, like Hercules and stuff. That’s different because we Arabs used to believe in a creator back in the day, but we used to worship God through idols. There were no temples like the Greeks had; they used to just put the idols around the Kaba which is the direction of the Muslim for worshipping the one true God, which is the holy city of Mecca i

Your last release was the album Arabian Blood. When was it released, and how did you record and create this record back then?

Arabian Blood was released in 2010 after Black Pearl in 2007. We made the album in Liverpool, UK. We did the start at home and then in the studio, making it sound better by mastering the music and mixing it properly.

How do you work when creating new music. Is someone taking the lead in it, or are their specific roles within the band?

It’s me who starts everything in writing the music, then the band follows what I made and add into it till we like what we made and take it from there. I write, then we record and experiment by recording at home. Finally, we hit the studio to do perfect the music.

Are you currently working on any new material, and where do you see this going in the future?

We are now working on recording the upcoming album, Where Evil Lies. Our label will handle where we will be after that. Arabian Dark Records, it is called. They found us on the internet, the label did, but also through metal mags such as Zero Tolerance UK and Metal Hammer Germany and other metal mags that interviewed us.

I understand that there’s one other band from Oman, named Belos. They are still there, and I’m wondering how they are different and in what way there is censorship and the like in your country.

Belos is a gothic metal band. It’s only us two from Oman who play metal. I heard them on the net, but here in Oman, you can play such music. It’s just that it’s not recognized. Not many people listen to this type of music. They are more into hip hop and all sorts of shit. Belos, I don’t hear much about them… and I don’t know much of them.

What was it like to start playing metal in Oman? Did you have things available, like instruments, rehearsal space, music, and all? What sort of response did you get from people?

Here in Oman, you can practice in places anywhere. Still, we prefer at home because we have more freedom to express ourselves, and playing here doesn’t lead anywhere, unless you are the type who just wants to stay in the same spot—just moving forward in improving the music without being heard being in the radio. They don’t care about metal music. If it’s the other stuff, you’d reach something, but not with metal, which is sad. We all want to have a metal scene here like in Dubai, but sadly it doesn’t work here.

There’s just not enough fans, too little support. I should be possible, but it has never worked out.

Are there any other bands, perhaps relatively unknown, active in Oman that make metal, which is currently not known? Or from neighbouring countries that you feel connected with?

Well, in Oman, it’s just Belos and us. You have more in Dubai, where the most recognized band is Nervecell. They’re an awesome death metal band. I know them too. You should check them out, and there are a couple of them in the Kingdom of Saudi Arabia also. I’m only friends with Al Namrood because we play the same kind of black metal music.

What future plans does Arabia have?

The future of Arabia is just making music and playing around the world and in all kinds of places. Just keep making boiling metal music, bro!

If you had to describe Arabia as a dish, what would it be and why?

A dish? Well, that would give people nightmares. Let’s just say lots of bashed up brains with metal music!