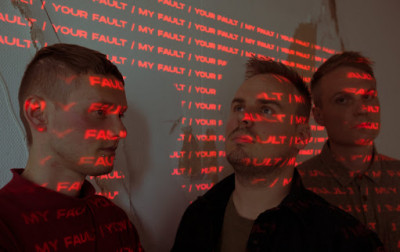 Intense listening experience is exactly what we were aiming for! The album kind of had a life of its own in the making.

HIRAKI have just released their latest album Stumbling Through The Walls and it sees the Danish trio travelling through an array of startling and intense synth punk and noise rock soundscapes. Gavin Brown talked with the band, who consist of Jon Gotlev (vocals / synths / noise), Tue Schmidt Rasmussen (guitars) and Tim Frederiksen (drums), about Stumbling Through The Walls and its creation process as well as how HIRAKI have evolved as a group musically, their influences, utilising visual impact and intense live shows.

E&D: Your new album Stumbling Through The Walls is out now. How did the creation and recording of the album go?

Tue: The process was almost the contrary to the creation of our first EP Modern Genes. Here Tim recorded all the drums in just one day, whereas with Stumbling Through The Walls it took three months to get all of it right. And the same goes for the other instruments. On the new album we’ve just dived way deeper into all of the details surrounding the composition and recording.

E&D: Was it more challenging making this album with a pandemic going on?

Jon: Not really actually. Most of the tracking was done before the world went downward, so it was mostly a couple of vocal tracks that had to be finished. And being that we tracked the whole record ourselves at a remote farm, nothing luckily interfered that much.

E&D: ‘The Alarmist’ was the first song released from the new album. What has the reaction to that track been like so far?

Tue: Overwhelming! And the same for the other singles, which is pretty stunning and a little surprising as we haven’t chosen the most easy accessible tracks as singles. Nonetheless they are all solid ambassadors for the overall sound and feel of the album.

E&D: Did you always plan to finish the album off with such a steak track in ‘The Alarmist’?

Jon: The ending of that track kinda left us with no other choice once we heard it on tape. So it came very natural that the ending would be the noisy rideout and the last words you would hear are “Where is the moral when you need it”.

E&D: The album is a very intense listening experience, is that what you wanted from this album?

Jon: Intense listening experience is exactly what we were aiming for! The album kind of had a life of its own in the making. It wasn’t until we had the last one or two tracks left that we could really hear where this was going and start forming the album. The diversity in styles throughout the album really came together once we heard it all through and it’s a perfect representation of the three of us together as creators.

E&D: You recorded the album in your own Cube Of Eternal Doom studio. Is it a blessing having a studio of your own to work in?

Jon: Both a blessing and a curse! But definitely mostly a blessing. We can come and go as we please, which was a huge factor for the creation of the album. We got the drum tracks down together, but everything else after that, was spread out as it suited the ones doing it the best. That is properly also the essence of this album. It wasn’t done in a week. There are a lot we did together, but also the tracks that got some more personal love from the individuals producing it. We all write, create and produce, so everybody has a saying in the creation of this beautiful bastard. Of course someone can come with an idea and follow it through, but it will always be with the blessing and involvement of every member. It’s definitely different then having studio time and only having that time to get your shit together. But we can see that doing it this way and remembering not to overproduce and go into needy greedy details, is best for our workflow.

E&D: Who else has recorded at the studio and who do you have planned in the future?

Jon: Mostly ourselves, other bands we play(ed) in, friends and family. We tend to wanna keep it for ourselves, especially so we have the freedom to go there whenever we want.

E&D: What does the cover artwork of Stumbling Through The Walls represent?

Tim: The front cover character, who we have named: “The Stumbler” represents what basically can be boiled down to the everyday struggles of not having time, strength or access to do what you know is right. Our intention was to make something super super simple and iconic, but also …somehow, Sustainable! Something that is so simple that we can print the motif on sweaters and bags ourselves. So we make ourselves independent of printers.

E&D: How did HIRAKI start as a band?

Tue: Jon and I have been in another band together for several years prior to HIRAKI (with Jon playing the drums). But together with our long-time friend and visual collaborator Tim we wanted to create some hard and wild music that seeks to explore some of the genres we like in new ways. We each bring quite different musical backgrounds and ideas to the table and HIRAKI is really the mix of exactly the tree of us.

E&D: How do you think you have evolved as a band since your debut album Modern Genes?

Tim: It showed us how much we ourselves as well as other people are craving new experiences and the need to be surprised is present – also within ourselves. It has left us wanting to explore more and finding new ways to express feelings and atmospheres.

E&D: What has been the biggest influence on the sound of HIRAKI?

Tim: We do of course have our heroes and heroines. Amongst us, we like very similar and also very different stuff. One thing we all have in common is our curiosity for new and different music. While writing material for the new record we were all listening to artist like Lorn, S U R V I V E, Hante, Soho Rezanejad, Health, Retox, The Body, Cloud Rat, Puce Mary, Chat Pile, Head Wound City and Lingua Ignota to mention a few.

E&D: Was the New York No Wave scene a particular influence at all?

Jon: Would be a lie to say yes! Would sound way cooler. No can’t say we got our influence specifically from the New York No Wave scene, but Swans who came out of the scene is a great orchestra – Seen them a couple of times now! Lydia Lunch who fronted Teenage Jesus & The Jerks is known in the ranks as well, but other then that can’t say it’s a scene that we’ve digged into. Would say though – that a lot of the bands that we do listen to – has definitely had some influence from the scene at some point.

E&D: What is the underground Danish music scene like at the moment and are there bands and artists that you would recommend for us to check out?

Tim: The scene is flourishing with many Danish artists being highly acclaimed, mainly outside of Denmark. Artists like MØL, Konvent, Oxx, EYES, HEXIS, LLNN are all doing their own thing and are hard to match.

E&D: Do you have plans to take the album into a live setting as soon as the album is released?

Tim: This year we have plans for 8-10 shows in Denmark in the fall and hopefully next year, when the dust has settled, we will be able to go abroad.

E&D: Would you say that there is a big visual element to your music?

Jon: Indeed! A lot of times it can easily be as big of a part as the music. It all coincides and is not just something to be added without thought.

E&D: How do you utilise that element on stage?

Tim: First of all our visual presence is a little different than others because Jon is mainly focused on his synthpads and effect pedals while choking on his microphone! But we do try to bring elements to the live shows that are rarely used or seen with this type of music before. Laser lights and the likes.

E&D: How have your live shows in the past year gone and do you feel lucky to have played them, with everything going on?

Tim: We have done two shows with the audience sitting down and it has surely been a vivid experience. We are used to people listening very intensely to our shows rather than going crazy so it hasn’t been that big a difference. But hopefully now, with more people knowing our music, they might be able to dance along!

E&D: Do you find playing live a cathartic experience?

Jon: Definitely! We are a group of very cathartic individuals, so it all comes together live.

E&D: What has been the most intense live show that you have ever witnessed?

Tue: The Armed at Maze Club in Berlin. Only like 200 people but when the show started the audience just went completely nuts in synergy with the band. The room was flooded with smoke and it was impossible to see anything, you simply had to duck for the arms and legs and bodies that were thrown around the club. SO intense!

E&D: What have been some of the best moments from your time in HIRAKI so far?

Tue: Definitely the show mentioned above as we had the honor of opening for The Armed. Besides that it is definitely a highlight to release the new album as it is the product of countless hours of composing and recording, ultimately resulting in exactly the record we wanted to create.