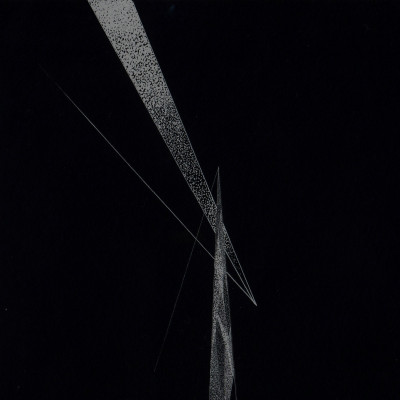 System I by Decoherence

Enigmatic UK/US three-piece and self-titled ‘void sculptors’, Decoherence, have returned in a sonic wave of ferocity and surging creativity. Debut album Ekpyrosis set the bar high, extremely high in fact, with its dense and claustrophobic noise and Blut Aus Nord inspired drum patterns. Sophomore release Unitarity expanded on this success with a more avant-garde and angular sound with a heavy infusion of industrial noise and layers of intricate electronics.

First track ‘Line of Force’ marches into form with abrasive dissonance and buzzing guitars. Pitter-pattering drum patterns carry the restrained groove through cold, angular ambience before finally exploding into a chaotic salvo of blastbeats and droning, hissing riffs and ominous background noise. The longest track ‘Dichotomic Observables’ wastes no time in tearing through the veil of cosmic blackness with precision blasts and lightning tremolos but soon slips casually into slow rhythmic beats and atonal twangs that see in a catchy charge of ringing, emotive strings that push towards a beckoning void of industrialised ambience.

The utterly venomous ‘Non-Holistic Constraints’ is a rabid slab of industrial blackened metal with untethered blastbeat assaults and hook-laden, discordant riffs that whir like rusted machinery. The smokey intro of closing track ‘In Perpendicular Planes’ may fool you until its jazzy, ambient peace is shattered by a wall of immense blastbeats and buzzsaw guitars. Jarring guitar plucks and deep, resonating drum beats march to a blistering finale of lightning blasting and devastating tremolos.

Decoherence are crushingly heavy and aurally devastating with a sound that writhes somewhere amongst the talent of Ulcerate, Blut Aus Nord, Darkspace and shades of Aborym’s industrial edge. The layers of electronic sound detail that glimmer beneath the raw, gargantuan chaos of multi-instrumentalist Stroda’s powerful and destructive music is outstanding, and that’s down to noise-maker Prior and her tech wizardry. Vocalist Tahazu’s voice is imposing, thoroughly devastating and bellows hauntingly from the depths of the music. The three-piece remain a restless entity crafting awe-inspiring black metal.

In the complicated realm of quantum mechanics, particles such as electrons behave similarly to waves and are described by a ‘wave function’, which is the mathematical representation of the quantum state of a system… ‘quantum’ meaning the smallest possible unit of any physical property, such as energy or matter. These waves can interfere, which can lead to the odd behaviour of quantum particles. As long as there exists a definite phase relation between different states, the system is said to be coherent. This ‘coherence’ is completely necessary for the function of quantum computing. However, when a quantum system is not perfectly isolated and is instead in contact with its surroundings, the coherence decays over time. This is called ‘quantum decoherence’, which is where the band get their name from. You could say that Decoherence are perfectly coherent. The three entities that form this unique band are aligned in unison and performing their own parts with precision, never deviating into anything less than perfection.

System I is a monster of an album from start to finish, and yes, I went on Wikipedia for most of that.