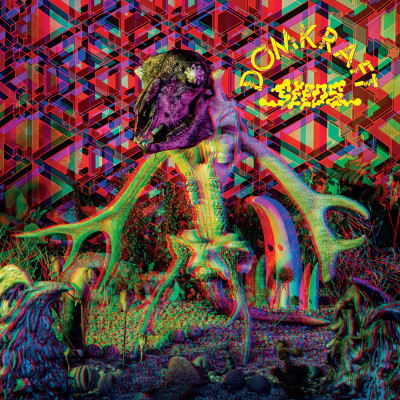 We are a bunch of fickle, fussy Goldilockses, really. We discover a band, swoon over it and tell anyone within earshot that it is the best thing ever (or at least the best thing that week). The second album comes along and we cheer because it is more of the same, except louder. Then the third album arrives. And we want progression. But not too much, because, y’know, that would be too difficult. But we want something new. We demand it, give us something different! (But not too different or we won’t like that either).

Which brings me to Domkraft’s third full-length album for Magnetic Eye, Seeds. And this Goldilocks is pleased to tell you that it is just right. The riffs (so many riffs – riiifffffffs) are still there. The tense, desperate mood is still there. But the Swedish trio have moved forward, with a few garnishes and an adjustment in tone here and there – and more than a little light shining on the bleakness in places.

We described Domkraft’s first two albums, End of Electricity and Flood, as almost like two parts of an apocalyptic double record. Words like fuzz, bleak, psychedelic and noise were used. Comparisons to Sleep were made. All this still applies with Seeds. But what becomes apparent in the opening title track is that a little melody is sneaking into their canon. Guitarist Martin Widholm heads further up the fretboard, drummer Anders Dahlgren fluctuates the tempo almost imperceptibly and bassist-vocalist Martin Wegeland simultaneously fuzzes up the bottom end with a thick, warm tone and bellows a message that is slightly more uplifting than their last two albums.

It all adds up to an extremely satisfying record. And the shafts of melody brightening the whole thing up made me connect some Kosmische dots in a way that I hadn’t done with Domkraft’s previous work. The name – Swedish for jack, the tool you use to lift your car when it has a flat tyre – has an obvious connection to Kraftwerk. And while loud, riff-riff-repeat tunes may have little in common with the German electronic pioneers, Domkraft’s work does hark back to other Kosmische (you may know it as Krautrock, but that name is dreadful) bands, like Amon Düül, early Hawkwind and Neu!

‘Perpetuator’ follows the opener and the angular, beat-skipping, almost-funky riff belies the massiveness of the song. I bet if you played it at 45rpm it would sound like the Meters – a troubled, tortured Meters, granted, but still; there’s no denying it is groovy.

Just like Neu! could move from harsh to beautifully wistful in the space of a couple of albums, Domkraft’s music can surprise you with an expertly placed hook just as you think the riffs are becoming suffocating. Sure, you’re not going to get anything as gorgeously melodic and catchy as Neu!’s ‘Good Life’, but there are definite sections to warm the cockles. Like in the enormous album closer, ‘Audiodome’, which starts with a riff like a collapsing chimney, with tumbling drums and crashing cymbals. But about two thirds through, the song goes quiet and we are transported to a big-sky psychedelic, cinematic landscape, with single notes from a near-clean guitar sending us off. It is magic: just listen to it, you’ll see what I mean. And at the risk of sounding like a fussy, fickle Goldilocks, Seeds is just right.