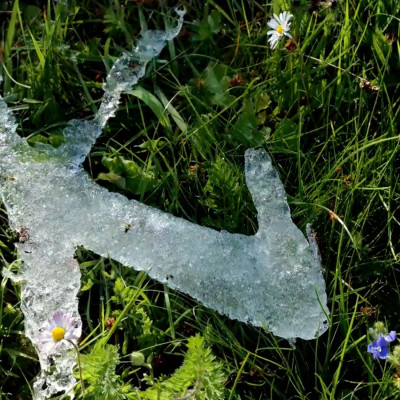 “The sun does arise, and make happy the skies…” This poetic, seemingly incomplete, invocation begins Kemper Norton‘s latest meditation on history, landscape, and folklore. It’s a fair statement of intent, after several albums of industrial ruin and nautical strife Troillia turns its face towards the light. Taking inspiration from play rather than work, from songs, dances, and the social gatherings that mark and structure the year. Up from dank earth and onto the bright headland. Field recordings and ghosts are buried in the usual layers of electronic tones and drones, which are now warmer, softer, almost weightless.

‘heva’ serves as an overture, a sunlit drone expands as the clatter and fiddle of folksound murmur and echo deep within it. ‘lattapuch’ stretches out in slowness, stillness, a laid back sunblind drift as the breeze sings in the leaves. About midway through a ticking rhythm comes in from afar, lifting it like the busy motion of spring. On the cover daisies turn their heads towards the sun as an ice sigil melts in its rays. The whole album has a sense of the mist burning off the land, of warmth and connection.

As ever with Kemper Norton the landscape we are lain out upon dreaming is Cornish, inspiration coming this time from traditional folk dances which give the tracks their names. Of course, it isn’t really folk music and it’s certainly not for dancing. Rather than the dependable structure of form, folk instrumentation offers texture and the dust grained traces of time and memory. On ‘crowshensa’ acoustic drones dissolve themselves into a calm limpid pool. Its peace broken by the sound of either work or sorrow, or both, it returns to the start. Ancient and modern sounds wrap about each other, sometimes contrasting, sometimes complimenting. The two strands partner to dance in ‘corwedhen’ starting out faced off more definitely and becoming entwined and instep by the end.

Similar patterns mark ‘second Phoebe’ but more beautifully realised. A sweet but smeared vocal loops beneath lapping waves of synthesis. Again as if in two parts an odd, almost triumphant, rhythm builds turning towards the sun before it marches up to the summit and then circles back around again. Repeatedly the mental images it calls up are of the Cornish coast, gazing out to sea, distant echoes amplified by topological irregularities. The spacey ambience of ‘hand in hand’ and ‘gookow’ set the stage for the closing ‘cantol’ a long, warm, drone like the sighing of the wind against the rugged shoreline.

Kemper Norton creates a unique sense of suspended time, a drift, a psychic connection to the past more dream like than illustrative. The buoyant mood of Troillia might deceive you into thinking it’s lightweight, it’s not. But if it turns out in time not to be his best, it’s very certainly his loveliest album thus far.