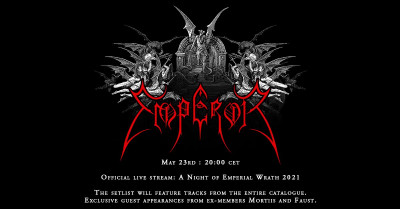 2021 marks thirty years since Samoth and Ihsahn formed Emperor, the most baroque band from the Second Wave of Black Metal, in Telemark, Norway. And, despite having released no new material for twenty of those years, they’re still relevant enough to warrant a live show in their hometown, with special guest slots from early members, as well as the accompanying live stream that I’m reviewing here. Few other black metal bands (if any) can say that.

Still, plenty has changed since the release of Wrath of the Tyrant in 1992: Ihsahn has swapped his leather and spikes for polo necks; it turns out Mortiis is human after all; Faust is back on the drums after his spot in prison; and both a malevolent plague of black metal, and a literal virus, have spread across the globe.

There are almost no visual traces of the satanic evil that defines the aesthetic of Emperor’s early works present upon the wide stage of Telemark’s Notodden Theatre tonight. The lucky sods who make up the live audience express the kind of hometown appreciation you’d expect during normal times, supplemented by a fair dose of gig-less pandemic frenzy. Amidst some green laser lights shining hypnotic spirals, Ihsahn and co enter the stage unceremoniously to blast into ‘In The Wordless Chamber’ from final album Prometheus, a track they don’t seem to have played live in a few years – and obviously the playing is flawless. Then it’s straight into live staples ‘This Spake the Nightspirit’ and ‘The Loss and Curse of Reverence’. If the bass (mostly played by session guy Secthdamon) is predictably low in the mix tonight, the keyboards are very high and piercing; this is sure to divide people, as while many (such as myself) will appreciate hearing these parts in detail and how this makes for slightly different versions of songs we know so well, others might just think the mix is bad. Back to some Anthems classics now for ‘The Acclamation of Bonds’ and ‘With Strength I Burn’, which I’ll never tire of hearing; while ‘Strength’ features on previous Emperor live releases, this would be the first easily-available live version of ‘Acclamation’, if this show is officially released.

Next follows what for many will be the most unique and significant part of the show. A short video interlude where we’re treated to the grainy monochrome aesthetic we know so well, with burning braziers floating through snowy mountains at night, thT can only signal one thing: the transition back to the Second Wave. The hype for Emperor’s stream/show was amped up a good deal when they announced that the core trio of Ihshan, Samoth and Trym would be joined by two famous members from the Wrath of the Tyrant period, Faust and Mortiis none the less. Well that video break provided the opportunity for Mortiis to don his trademark mask once more, seen on-stage clutching a bass for the first time in many years. Going back even further than Wrath, they blast through their cover of Bathory’s ‘Call From The Grave’ from their demo cassette – a live rarity if not a debut – and it’s a marvelously slow and noxious nugget of blunk & roll, on which the bass is actually audible. If Mortiis looks a little uncertain during this performance, eyes following Ihsahn at points (he admitted to feeling nervous on his Facebook page), he’s spot on – as is the case for their version of ‘Wrath of Tyrant’ itself, which makes you long for Emperor to dig out and reissue some old demos and covers from the vaults. (Well, or just make that eye-wateringly rare and expensive box-set more widely available for paupers, but let’s not go there…). This Second Wave nostalgia, however, is over very quickly and I’m sure many of us where hoping for some rarities like ‘Ancient Queen’ or ‘Moon Over Kara-Shehr’ (have they played this live more than, say, a few times in the 90s?).

Still, they crack on through more safe, live favorites like ‘Curse You All Men!’ and my personal favorite ‘The Majesty of the Nightsky’ (which sounds especially good with the keyboards in the foreground). Emperor have never needed to go overboard with an elaborate stage show – their music is elaborate and detailed enough – but some projections of waterfalls and woodlands throughout the song’s wonderful keyboard break are a lovely touch.  Faust returns to the stage for ‘I Am The Black Wizards’, of course, and it sounds as good as it always does – although it would have been nice to see Mortiis back on the low frequencies, especially as he also wrote the lyrics. Still, what a song: that final, post-chorus breakdown riff.

“Inno a? Inno aa? Inno a Satanaaa!” Hearing that cry, you know it must be nearly the end of the show, and it does feel a little short, even though they have pretty long songs. Well not quite, there’s time for more golden Anthems material, namely ‘Ye Entrancemperium’, which makes for about as grandiose a finale as any band could muster. It has to be said that Ihsahn seems to strain a little on the high parts, but let’s face it: few if any black metal vocalists can pull off the contrast between dirty and clean vocals as well as him, live or on record, and his performance – as with the rest of the band – is near flawless throughout.

If Emperor give this show an official release, will it rank amongst their other, superlative live releases such as Emperial Live Ceremony and Live Inferno? Perhaps not quite, although I suspect that most fans (myself included) would buy it anyway, if largely for the Wrath-era extras and interesting keyboard-heavy mix. For those fans down on the ground in Telemark, starved of live music like everyone else: damn, what an experience it must have been.  For those others like me, tuning in from the comfort of home, it filled the gap in a year otherwise void of anything “new” from Samoth and co., provided yet further insight into the timeless complexity and grandiosity of their classic recordings, and demonstrated that – thirty years down the line – Emperor remain as unique and relevant as ever.