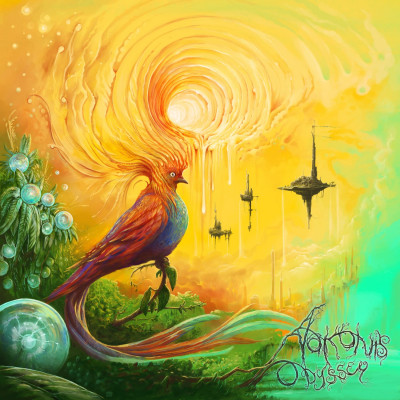 Vokonis are very happy. The accompanying press pack for their new album says they’ve made their “first true prog record” with Odyssey. The album features Per Wiberg on keyboards, one of hard rock’s premier utility men and a regular guest at Clutch live shows, he also featured in Opeth and Spiritual Beggars, as well as his own current outfit Kamchatka. There is excited talk about use of a mellotron! And what about that fantastical album cover, featuring a sort of cosmic bird of paradise? Yes, it all seems to have gone very prog, except if you’ve been following the band recently you’ll know that actually not much has changed! Most of the elements that make up Odyssey were present on 2019’s Grasping Time, but you do get the feeling that the band are more confident in their direction and in the execution of their vision.

Now forget everything I’ve just said in the first paragraph, because opening tune ‘Rebellion’ is thuggish, sludgy, banger. Granted, the clean vocals of Jonte Johansson are continuously trying to lift a heroic melody out of the mire, but musically it is all pounding, booming drums and gnarly guitar, matched by Simon Ohlsson’s caveman bawling. It reminds me of those pictures of fights you see in comic books – a swirling ball of feet and fists. It wouldn’t be seen dead in a cape.  And that’s the key thing to remember here, Vokonis are exploring progressive metal, not prog rock. Odyssey is frequently super heavy, it’s just as brutish as on the earlier works, such as The Sunken Djinn. What has really elevated the band’s sound is the improved clean singing of bassist,  Jonte. Previously Simon’s rather limited, blunt roar dominated and left the band’s songs decidedly lacking in colour. In fairness, Simon’s vocals have improved too – his black metal-style screams on title track ‘Odyssey’ and closer ‘Through The Depths’ really add a dramatic, sinister to edge to the band’s most ambitious songs yet.

New drummer Peter Ottosson is credited with bringing added inspiration to proceedings and his work on ‘Blackened Wings’ is a standout, anchoring the chorus with a steady beat, whilst elsewhere creating complex patterns and dazzling percussion. The song is another of the shorter, more direct numbers and I have to say, for the casual listener they will be the most memorable. The longer tunes, such as ‘Hollow Waters’ and ‘Through The Depths’ bring greater rewards with patient, uninterrupted listening. Per’s keys add subtlety and depth throughout, but more the epic numbers have a tendency to meander slightly, meaning you’re not always sure what song you’re listening to if you’re not paying attention. That’s the nature of the beast, I guess. However, the quality of the performances cannot be faulted, with Simon producing some absolutely stunning guitar solos – his numerous breakout moments on ‘Hollow Waters’ in particular are fantastic, and there’s a touch of Muse’s grandiosity to the final few minutes of that song. Elsewhere, perhaps unsurprisingly, Opeth are called to mind, but the two very different vocal styles, plus some stellar instrumental passages, where the band really get to imprint their new sound, means that Odyssey really does see the band forging their own identity.

As is often the way with rock albums, the last tune sees the band pull out any remaining stops and the near thirteen minutes of ‘Through the Depths’ doesn’t disappoint in terms of drama, with its breathless, virtuosic crescendo. Per underpins everything with a Spiritual Beggars-style, rich, swirling keyboard accompaniment, as the song takes numerous stylistic twists and turns, always progressing towards a stirring and strongly melodic finale. Again, I must stress, this album really benefits from your full attention, there is a lot going on and much for the rock connoisseur to enjoy.