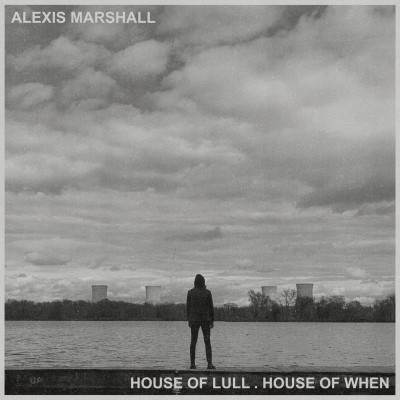 House of Lull . House of When by Alexis Marshall

Notes for:
Alexis Marshall – House of Lull . House of When

‘Drink from the Oceans. Nothing can Harm You’
“The past is like an anchor”
“I’m here!”
Longest track as opener.
Sets the tone – claustrophobic, uneasy, raw…
Intimate – uncomfortably so.

‘Hounds in the Abyss’
PARANOIA – kind of feeling like the aftermath of ‘Ocean Song’ off of YWGWYW (sans Paul).
“Are you……?” refrain
A single – oppressive, tenebrous

Jaye Jayle plays on this LP.

‘It Just Doesn’t Feel Good Anymore’
“Don’t…..” refrain. Punctures.
“Fulfil your obligations”
Disquieting.  Genuinely causes a shifting in the seat.
Voice STARING at you through the speakers. What?!

This HOUSE – House of Leaves reference. A trap, a maze, a prison.  Horror in a typical image.

‘Youth as Religion’
POETRY at the core of this LP – reflective, strings, uncomfortable in the relative oasis of a gentler moment.
Distracting production – purposeful, a positive.
Challenging, this calmer approach.
“God finds you in such places.”
Louder, crescendo of noise, swallowing, all encompassing.

“God finds you in such places.” Refrain returns across tracks; ‘Religion as Leader’
“Fever at the bedside.”
Powerful. Insistent. Leeching. LOUD.
Lingua Ignota features – for a second time on the LP now?

‘No Truth in the Body’
Spinning coins are here.
“Do you see?”
Piano is horribly beautiful.
Bass notes from the piano underpin and provide loose structure.
Abstract. Wilful abstraction.

Brechtian alienation. Concept applied to music?
You can see the construction yet are fully immersed.  In?
Not noise rock, but strangely reminiscent.
This isn’t another Daughters record.  IT REALLY ISN’T.

‘Open Wound’
“As the rapture comes…”
Penetrative sound – stabbing. Daggers of noise. Wounding, indeed.
Distracted, conversational, looped, overlapping vocals.
ANXIETY.
Second single – both this and first are perhaps the most compact.
The album overall is far more spacious.  A capacious house. Endless. GET LOST IN IT.
“What a time to be alive!”
“This world, before the next.” (is NOT “opening up”).

Certainly, a through-line here. If not a concept record, but there’s balance in the discord and disassembly, despite non-linear approach. Because of it?  Due to Alexis’ lyricism, absolutely no doubt.

‘They Can Lie There Forever’
“Only passing through…”
“Deer in the headlights…” (like us? / like him?)
Probably has the most sonic similarities to the aforementioned singles.
Concise – almost an effected bizarre chorus?  A chorus of discontent.  Opprobrium.

‘Night Coming’
Closing track. Can he bring it home? Hahaha, home to the house.
OMINOUS.
Lower register of spoken word, very briefly reminiscent of Eugene Robinson of Oxbow.
As it goes on – not so much.  Identifiably Alexis.  It’s a stand-out.
Terminally ill, catatonic, depressed Bob Dylan doing his own eulogy. (!)
“Hold hands.”

But most definitely its own beast.  Very much so.
Alexis’ own.
Quite incredible.

How on earth is he going to tour it?!  Wonder if he will.  Smaller venues surely?
It almost needs to be a warped poetry evening……………….

One of the most individual artist statements I’ve heard in some time.
Especially as a debut.
ESPECIALLY when he’s so strongly connected to and associated with Daughters.
And his other cult past bands – As The Sun Sets.

Some latent Daughters blueprint there. Sure.  Buried down, deep.
Such an unmistakable voice – particularly after You Won’t Get What You Want.
But him.  His.  This is him.  His.

‘Guest House’ on YWGWYW had Alexis howling “Let me in!”
Did get gain entry?  To?  This house.  Of lull & when.
Obliterating the I.
*pretentious reviewer POV. Too many references to YWGWYW.
(The point is surely this very much a SOLO LP!).

An excellent album.
Will he do more?  Hope so.

How the fuck
do I get OUT of
this
house