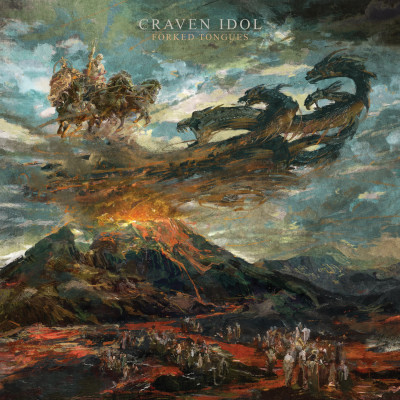 Craven Idol’s new record Forked Tongues comes heralded by a cover painting of a celestial battle featuring snakeheaded sky demons emerging out of a volcano, aptly depicting the extreme metal within as a bracing mix of hallucinatory, mythic force and geologic rage.

As soon as the swerving riff of ‘Venomous Rites’ appears out of a smoky cloud of belching fumes and blasting drums, the album establishes itself as a powerful set of ferocious extreme metal. The sound is packed, complex percussion fills crammed in everywhere to drive the energy along, solidly barked vocals and the odd screech and evil cackle, giant riffs complemented with wild lead guitar tangents shooting off like fireworks here and there. ‘The Wrath of Typhon’ next has a similarly headsmashing feel, lurching from side to side at first then eating up road remorselessly, definitely one that should come with a caution about listening to this while driving. If it were necessary to categorise, you’d probably say just straight-up extreme metal, with definite elements of black, death and thrash but leaving behind any hairsplitting nonsense about what has to fit with what, searching instead for whatever is most furious. ‘Iron Age of Devastation’ has a few more thrashy shouts for example, with some old school spine-ripping death metal guitar runs.

Listening over, that feels like the first of three chapters, based around the length and complexity of the tracks: the record starts out with three tracks around four minutes, then a longer pair both around five and a half minutes, then the final two tracks each lasting beyond nine minutes each. So the second act is ‘Even the Demons’ and ‘Forked Tongues’, the former elbowing itself a bit more atmospheric spaciousness in places, squealing guitars at the end reaching for an exhilarating, even epic feel while maintaining the hammering pace. Then the title track has an impressive rumbling energy, with the rhythm led as much here by the rough, angry vocals before the kick takes over for a truly ground-shaking false ending followed by a pulsing riff reprise which prompt some appropriately cavemanlike vocal ‘ough’ repetitions.

Leaving behind the lower slopes we get to flintier, harsher paths as we scale the violently retching volcano… ‘Deify the Storm God’ warns us off with a lashing thunder strike, but pressing on we find shivery upward runs leading to plateaus of weird chanting and shards of fiery sunlight through stormclouds. Finally the peak is reached with ‘The Gods Have Left Us For Dead’, which manages to combine brutal spitting anger with a background sense of melancholy and also grandeur. A great ending to a densely packed and tightly focused album, Forked Tongues is a furious, refreshing extreme blast. With a gradual, hard-won expansion and deepening of the pieces through the course of a strenuous and intense album, Craven Idol have put in a serious shift in leading us up the mountain.