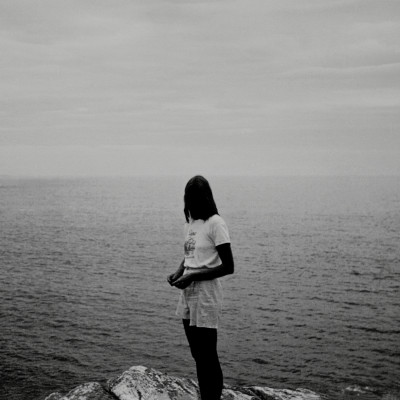 Madeline Johnston is not happy.

Throughout the 33 minute run time of Midwife’s latest record – Luminol – there is a constant current of world weariness, of disappointment, of heaving sadness, and a sense of glum resignation.

This shouldn’t come as too much of a surprise, really: her previous records weren’t exactly pogo-ready glee trips. Anyone familiar with her debut under the Midwife moniker – the jaw-dropping Like Author, Like Daughter – or last year’s fantastic follow up Forever, knows that the heaven metal that she so adroitly peddles is laced with a heavy old heart. Even the Prayer Hands and In/Heaven EPs or the more experimental loops that she creates under her Mercury Tracer alias plough a pretty sullen furrow.

Whilst, previously, there were clear flags for the source of this sadness – closure of the DIY arts space that shaped Johnston’s creative approach as well as the death of her close friend and mentor, Colin Ward – Luminol’s tribulations are not quite so easily revealed (assuming that we’re taking the past year’s global strife as a given, that is). There are clues, however, littered throughout the record. The lyrics to ‘Enemy’, for example, point towards either a form of body dysmorphia or some kind of degenerative disease. “My body is against me… My body wants to kill me” and, similarly, the opener ‘God Is A Cop’ features the refrain “I can’t kill the evil thoughts”. Johnston appears to be at battle with both her physical and mental health.

The penultimate track – ‘Colorado’ – weeps for severed relationships. The work of maintaining these bonds is heavy shit. Whether they happen to be of a romantic, friend, family, or work bent. These things take time, effort, and perseverance. They take two tango-ers. ‘Colorado’ feels like reaching out. It sounds like a song for help.

Sonically, the world inhabited by Luminol is not a million miles from what has come before but everything has been fine-tuned and pushed to its limit. That intimate fragility is still there but it has grown sinews. The big swinging guitar chords are larger than ever and leave a hulking trail of distortion in their wake. There is a steely guitar, throttled with static, calling out at the end of ‘God Is A Cop’. It rings out alone, over and over again but to no response. Permeating the core of the album is a gentle high-pitched hum not dissimilar to soft tinnitus. It waivers constantly, undulating like a lurking danger. A seemingly benign sea that erodes with every lapping wave.

Helping her to bring the gloom are fellow dark dowsers Tucker Theodore, Angel Diaz (Vyva Melinkolya), Zachary Cole Smith (DIIV), Ben Newman, Colin Caulfield (DIIV), and fellow Flenserian (definitely a word) Dan Barrett of Have A Nice Life fame. One of which, I assume, contributes the wall-crumbling drums on ‘Promise Ring’, which is Midwife’s ode to huge 80s power ballads. It’s swirled in a haze of reverb and bounces from Springsteen (“You know I was born to run, but I’ll still be here when you’re done”) to a more hard line Neil Young (“Love will break your heart forever”). An exultant blast against adversity.

There is a quiet coda. Gentle chords place ‘Christina’s World’ in a different time, a different place. Perhaps this is a letter to Johnston’s mother, whose picture adorns the front cover. Her face obscured so that we can see ourselves in that place. In that position. Us in her. Like a memory that shines a light on it all, revealing that which was hidden. Finding truth obscured, this is at the heart of Luminol which, fittingly, borrows its name from a substance used to locate traces of blood at crime scenes. As Midwife has chosen from the beginning to obscure her voice via a telephone microphone, giving her a disembodied, ethereal quality, perhaps the truth that she seeks is within herself? Or a challenge for those who listen? Of course, seeking truth during an era of fake news feels like a mountain of a task. So much is clouded, hidden, and twisted. But to start to seek, to dig beneath, to enquire, to interrogate, these are all valuable approaches that should be used widely and equally as often for that which opposes and/or supports the mainstream as for our own selves, hidden as we often are from ourselves.

The biggest surprise on the album appears in the form of the stunning ‘2020’ which also continues the run of dedicating a song to a traumatic year (the opener to Forever was a scathing “Fuck You” to 2018). This time around the dedication to the foul year of our lord takes the unexpected form of a, perhaps unintentional, cover of ‘Gone Away’ by The Offspring. Whilst it might seem like an odd choice to reimagine a mid career hit by ageing punk rockers (although not perhaps as eyebrow-raising as Lingua Ignota’s cover of ‘Kim’), paring it down to the repeated mantra of “And it feels like heaven’s so far away” turns the track into a focused and resolute offering. There are no flourishes, no explosions of drums. Little more than a guitar and voice wending their way onwards, continuing despite it all. It’s similar, in terms of tone, to the ‘Dancing In The Dark’ redo by Woman’s Hour: slower, more sombre… a space for wrenched hearts to sit astride.

And it’s in this moment that Madeline Johnston so succinctly captures a particular sense of heartbreak. It’s as if she sees love in all that she does and all whom she spends time with. This, inevitably, results in painful schisms as things invariably come to an end. Her heartbreak is a mourning of finality. The loss of time, friends,  lovers, and moments. Within her deep melancholy lies a beam of joy. A sense of gratitude that these moments were even able to exist at all. And it’s this triumph that bolsters her sonics with such a great depth and voluminous weight. Whatever struggles that Johnston is currently going through, I hope that there are people there for her. And I wish her the best of luck. I hope, too, that she knows that the art that she creates is certainly helping others through their own struggles and that this gives her cause to carry on.

In a recent interview with this here website, Johnston described Mount Eerie’s Lost Wisdom as “like a roadmap to live by, but the map doesn’t take you anywhere, it just takes you inside you”. With the clues littered throughout Luminol it feels like Midwife is leading herself out to us, just enough to catch a glimpse of her truth and for it to resound deeply within us.