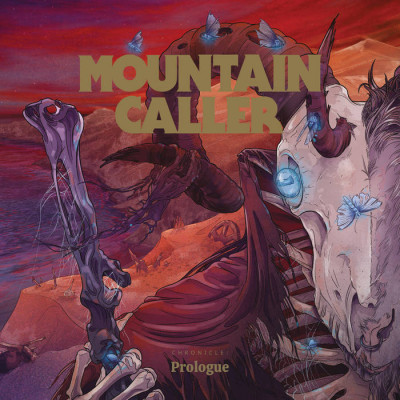 As we are now generally bombarded with 30, 40, 50 years old anniversaries many by artists long past their peak, a more recent anniversary celebration this year is ten years of the mighty New Heavy Sounds label. Selectively churning out nuanced and intriguing heaviness sees them celebrate this achievement by releasing new EPs by bands currently on their roster. Yes, bands which are currently in existence and writing new stuff.

So far there has been an acoustic EP by Sky Valley Mistress, and there is a new three song EP by American doomsters Embr due out later in the year. The latest EP release is by London’s post-rock instrumentalists, Mountain Caller. A follow up of sorts, or to be more precise a prequel to their very fine debut album Chronicle 1: The Truthseeker. An album that had this reviewer describing it as ‘an absorbing listen best experienced solitary using head phones. If you’re a fan of Pelican, and My Sleeping Karma, then Chronicle l: The Truthseeker is worth a listen’.

Chronicle: Prologue was recorded at the same time as the album but concentrates on the recording of the band’s earliest material, and as the title implies it conceptually leads right up to the journey of their debut. So, some forward planning and thinking was going on by the band and/or the labels head honchos Jed and Paul.

The three track EP sees the opener ‘Something Stirred From Beneath The Rubble’ have everything Mountain Caller have proved they are so good at in an action packed nine minutes. There are numerous twist and turns, catchy slow gathering builds, towering crescendos, and of course massive riffs. This is epic post-rock and if you don’t like this, you’re probably not going to like Mountain Caller. ‘Beyond This Black Horizon’ compacts all-of the above description into a crunching six minutes with a heavier emphasis on fatter robust riffs and is one of the band’s most immediate joys. While ‘Stripped Of All But Purpose’ dives deeper into their musical whirlpool to demonstrate their progressive chops.

What Mountain Caller are proving so adept at is having a keen ear on the constant shifts of gears being perfectly timed and well-executed, and for consistently delivering an absorbing listening experience. This EP is an absolute must for fans of the band as well as good starting points for those willing to explore these Londoners for the first time before heading straight into their afore-mentioned debut.