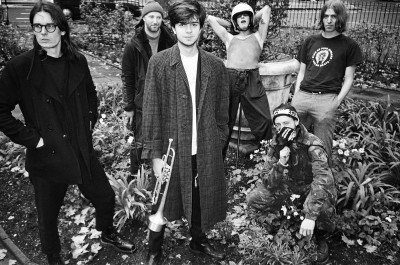 We may have upset some people with that show. It was definitely one of the more chaotic ones before we had a solid line up and as much of a sense of self as we do now.

After catching them at what seemed to be a particularly unhinged show at my favourite music venue, The Lexington, I began to find myself intrigued by London’s latest post-jazz delinquents Muck Spreader. Their EP ‘Rodeo Mistakes’ held a lot of promise, but I definitely got the feeling that they were still finding their feet and upon seeing a new release on the horizon, I decided to try and use some of my free time to shine a light on the group via this interview… although, my computer died in the process and I had to help my girlfriend through a laborious citizenship process and on top of that went back to full-time work so, things became a bit dated, but luckily, the information is all still relevant and the new album is out now. Anyway, thanks to Luke and Vincent from Muck Spreader for agreeing to humour me.

(((o))): I first saw you guys at The Lexington (London), I was wondering if you remember that gig and if it was a fairly typical show for you or one of the more chaotic ones? What is a typical Muck Spreader gig about?

Luke: Hahaha, I remember it well, I think the less I say the safer it’ll be. We may have upset some people with that show. It was definitely one of the more chaotic ones before we had a solid line up and as much of a sense of self as we do now.

Luke: We were all stranded at the same airport on the Azores Island when our flight was cancelled.

Vincent: We were asking the barstool for directions for twenty minutes I recall.

(((o))): Who are some of your key influence, whether they be shared or individual?

Luke: I do all the lyrics, it’s completely improvised every time. Whatever comes to me in that moment. I constantly keep my antenna out taking in and feeding from snippets on the street, nature wherever I may be. Then when the mic is in front of me, I channel, dial up and regurgitate all the information I’ve consumed.

(((o))): A lot of the popular bands in what some would describe as the So Young scene have started incorporating brass instruments and unusual time signatures and song structures into their music. What would you say sets Muck Spreader apart from bands like Black Country, New Road or Famous or Black MIDI?

Luke: A proper front person of the old description, no instrument just the mic. (said in a deep Tennessee drawl, followed by a slew of belly laughter.) On a serious tone, I don’t actually know any of these bands, I’ve heard of them, but don’t know the line ups or how they sound. We’re just mucky, making our lane.

Vincent: I like lots of those bands. Coming from an inside perspective of the band, it’s hard to comment without sounding pretentious aha. We actively try to distance ourselves from scenes. With improvisation, it’s easy for your art to be clouded by pretence. In the band, we have all sorts of different tastes, but we try to ignore all that and make muck. But, rightly so people should draw parallels as we were born out of the same scene as some of those bands and play at similar venues on similar bills.

(((o))): What was it like recording the new EP Abysmal compared to Rodeo Mistakes?

Luke: We’ve played together a lot more and developed and gelled, Rodeo Mistakes was recorded after this line up had played only three shows and no rehearsals. Keeping it mucky. Really, the secret is Paul the bass player, producer, mixer, masterer is basically our all-round wizard in residence, behind the desk and in front of it, goddamn even on top of it.

Vincent: We had the same process of renting the studio for a weekend and just playing non-stop. Then we pick and choose what’s right for the EP. Maybe one day we’ll release all the other tunes that got dropped. “MUCK SPREADER – THE LOST TAPES”

(((o))): How did the new music video for ‘Take Flight’ come together? It kind of reminds me of The Surprising Adventures of Sir Digby Chicken Cesar

Luke: My friend Fraser Thorne who directed it, was having a conversation during one of the lockdowns about the onset of boredom. So we met up with a camera and some other talented people beginning to feel the malaise of monotony and decided do something about it.

Vincent: Fraser smashed it with that video. I see what you mean about the Mitchell and Webb thing. Luke’s definitely on some sort of quest.

(((o))): How would you guys describe your sound for the readers?

(((o))): Do you have any obscure gems or unsigned bands you can recommend to us?

Vincent: He’s not really obscure but, under appreciated – Julius Eastman