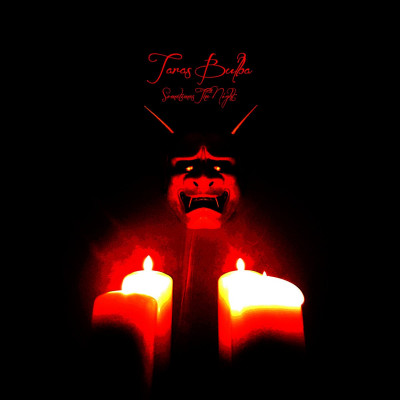 Sometimes The Night by Taras Bulba

There’s some dark, meandering thoughts being unleashed on this new album from Taras Bulba and as the title, Sometimes The Night, suggests, its those moments when the oppressive darkness intermingles with the lucid dreams to create a netherworld of disconcerting images. Now, that’s one long sentence to open a review with and whilst it may not match up to the breathless wonders of a Henry James lyrical ode, Our intrepid spacenaut Fred Laird is really turning the screw with his new music.

Perhaps we shouldn’t be surprised given his love for art, film, and imagery, and cast your eyes on the remarkable cover created with little more than…well, that would ruin the effect wouldn’t it, but Sometimes The Night feels like a drawn out soundtrack to some long lost black and white jazz flick, ensconced in smoky atmospheres, interlaced with colourful psychedelic saxophone, avant-garde noise, and topping it off wit a hint of kung fu. Previous listeners of Laird’s old band Earthling Society will nod their heads in appreciation at the tenuous links to Mo – The Demon and its improvised soundtrack. Here Laird focuses the music away from the head trip into something much more menacing and urgent.

Beginning with a laugh, ‘The Green Eyes Of The Dragon‘ plays off a piano player against the squall of the night time crowd, blasting its breathless noise against the stoic playing which ends up being the ringmaster of the swirling ebb and flow. It’s a statement of intent before the more esoteric ramblings of ‘Orphee‘ introduce us to the spiritual side of Laird‘s music. Sounding like a dark cast off from the summer of love part 2, a bastard son of Orbital’s ‘Halcyon And On‘ where the comedown is the actual hit. Imagine that mixed up world. It’s the summation of a lifetime of debt to Popul Vuh as they push Herzog’s boat further and further up the mountain.

You like to imagine Laird as some cowled, raincoat wearing figure owing a season of cigarettes to Peter Lorre, whilst casually pumping out hallucinogenic mushrooms to a soundtrack of Julian Cope and Syd Barrett, but behind the mask is a musician who is intent on forging his own path. A multi-instrumentalist, the casting aside of his previous band has unleashed freedoms which we never could have imagined and this third album under the name Taras Bulba sounds nothing like the preceding one (or the one before that). It’s an incessant urge to rediscover, assimilate new influences and ideas, forge new identities, and cast aside simple genre terms such as psychedelia. What is psych anyway? In Laird’s hands it is exploration of sound linked to imagery. Here he is soundtracking the best film of your life, only it’s not one you watch, but live.

Go ahead, and take the purple pill, the one that invites you in to the rain addled ‘Night Train To Drug Town’, but remember to pay a call to ‘One More Lonely Angel’. Each track becoming its own microcosm of the forgotten night. Instead of easing us down, the music continues to interrogate and ask questions as it sinks deeper into introspective malaise on ‘House In The Snow’. The cascading piano dealing out the melody as Charon carries your soul from the night into a dawn. What dawn though, depends on your point of view.