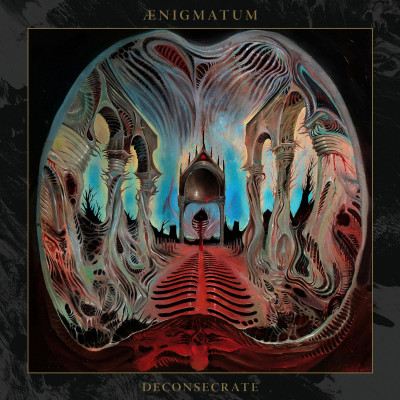 Portland’s Ænigmatum are still a fairly new taste in the world of extreme metal with their inception only being in 2017, though most of their members have been around in various bands for time time now. Ænigmatum are vocalist/guitarist Kelly McLaughlin, Brian Rush on bass, Pierce Williams on drums and guitarist Eli Lundgren.

Ænigmatum play a furious blend of blackened death metal with a variety of other textures, such as Swedish influences and a few interesting prog moments. Deconsecrate marks the Oregon four-piece’s sophomore album with their first self-titled debut still very much fresh in peoples minds. Not much has changed sound-wise but there’s a definite evolution and a tightening of their technical ability. Featuring a few tracks included on their recent demo Adorned In Wrath, Deconsecrate takes the band and their sound to a whole other level.

Opener ‘Forged From Bedlam’ rolls into blastbeats from the get-go and tears through flaming tremolo wobbles and wild riffage. It’s the one-two battle between the interesting drum patterns and frenetic guitars that set this intro track ablaze. ‘Undaunted Hereafter’ is a far more serious track, with darker depth and churning, icy riffage brought to life alongside the destructive hit of galloping blast frenzies.

‘Fracturing Proclivity’ is an untamed beast of speed and fury with all the snarling, blackened bite of a Naglfar track. ‘Despot of Amorphic Dominions’ shows a little slow and trve atonal groove of the old school and delves into various generations of blazing Nordic and melodic Swedish metal. Final track ‘Animus Reflection’ wraps the album up with a tidy number of spasmodic brutality and proggy experimentation, complete with a jazzy freak out of rabid tremolo shredding and some Akercocke-like drum rolls thrown in for good measure.

There’s many layers to this release, which means there’s never a dull moment. It’s brutal yet melodic and technically outstanding without being overbearingly ‘tech-death’. The backbone of Deconsecrate is in the searing guitar solos and blistering tremolo leads that carry so many hooks through pounding blastbeats, bass pulses and gruff Sulphur Aeon-esque vocals. Those riffs soar and fly high with their highly-tuned wildness and by the first few moments of the first track it’s clear what Ænigmatum are all about.

And lets not fail to mention atmospheric interlude ‘Floods Within a Splintered Cortex’, which not only boasts a cool name but shows that their diversity explores other realms than brutality. Whilst this instrumental mid section may be slightly disjointed from the rest of the album it still shows a deep understanding of boiling eeriness and strange beauty and further exploration of this ambience would be an interesting addition to future releases.

Deconsecrate is a fearless mini hurricane of genre-twisting sound, both straight-up death metal and at times experimental, blackened metal with a few interspersed prog glimmers. It infuses influences in a pleasurable cocktail with devastating effect. There’s a gargantuan force behind this record and that’s of course down to the workmanship of its four band members who have surely secured themselves a place among the metal pantheon. I went in not fully familiar with the band and ended up loving this album more than I thought I would.