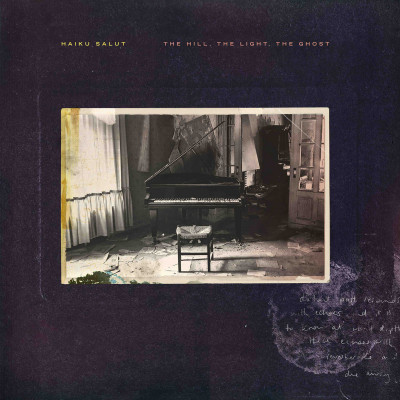 Have you ever seen a ghost? Would you know if you had? How about heard one? Knocking the walls or creaking the floor. On their fifth album Haiku Salut set out in search of them with the aim of capturing something on tape. Now, much as I enjoy the idea of them donning overalls and proton packs to battle paranormal entities so that us regular citizens might sleep safe in our beds, that is not what’s going on here. Rather we find them in abandoned houses, standing very still, holding their breath and listening closely for what comes through the ether. Tapping the emotional resonance of empty spaces and disused objects. The human static on the universal frequency. The ever present ghosts of memory.

The seeds of The Hill, The Light, The Ghost are in field recordings made by Sophie Barkerwood, initially with no specific purpose. Slowly this growing library of sounds and textures began to inform the band’s writing until they were actively looking for places to record them. ‘Entering’ is based around a derelict grand piano in a long empty German house. These recordings wind through the album, woven quite naturally into music which smudges the edges of their sound into something more atmospheric. Elliptical piano melodies ride eddies of sound, guitar notes sparkle in amber, wavering ghost drones lift simple but evocative synth lines over swelling strings, all pushed on by energising bass pulses and glitching rhythms. Although it’s quite soft and spacious there are times when a lot is going on but they float the elements weightlessly around the room.

On their last album Haiku Salut wrote a new score for Buster Keaton’s masterpiece The General, since then they’ve also produced a couple of long pieces to soundtrack short films from the BFI National Archive. On all three they engaged with the past while developing their own blend of electronica and neoclassical ideas. This new album continues the themes of history and memory, drawing on lessons from recent work to produce a unified suite of their most ethereal music yet. The tracks ebb and flow within themselves and within the whole. There is, I guess, a strain of minimalism in the small repeating figures that loop through it but they remain open ended, often fading to reappear and repeat. The album unrolls organically around you with a lightness of touch, barely disturbing the dust to reveal its careful structures. It just sort of hangs in the air, spectral but benign.

The second of those BFI pieces was called Portrait In Dust, a title which might have served as well here. A resonant image, almost as if dust were the record’s subject. Undisturbed in abandoned spaces, thinly shrouding the past, the eternal yet inconsequential residue of life. Dust in corners as a material form of memory, motes spinning in still rooms. Dust to dust. Right now, in history, to be stood in an abandoned house wondering over the people who have gone before us seems a very charged image. But then, it probably always has. The Hill, The Light, The Ghost is essentially a memento mori, a meditation coloured by the certain knowledge of death, the constant ghost. Bittersweet rather than morbid its music is emotional and immediate but remains mysterious. It’s so delicate and effective it sometimes feels as if they left the tape running and it came out of the night air, an elegy from the past.