(((O))) Review: Sermon of Flames – I Have Seen The Light, And It Was Repulsive 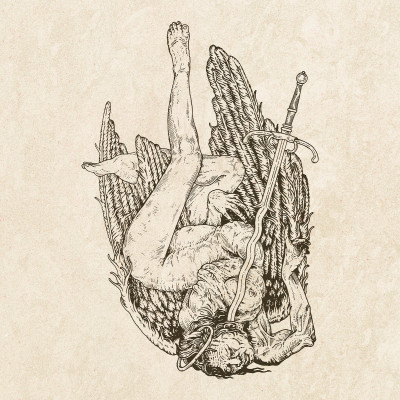 I Have Seen The Light, And It Was Repulsive by Sermon of Flames

Irish duo Sermon of Flames have been turning heads ever since their raw and unhinged demo Heralds of the Untruth was unleashed in 2019. The enigmatic duo play a furious blend of blackened death metal, industrial and noise to create an uncompromising sound forged in the fires of hatred. The duo have taken the framework of their lauded demo and headed further underground with their debut release I Have Seen The Light, And It Was Repulsive.

The aptly named ‘Cauldrons of Boiling Piss’ is straight fire, with bludgeoning stop-start blastbeats and snaky riffage leading to a lengthy ear-attacking finale of black metal’s ever-popular go-to of static noise. ‘Chords Wrung from the Ribs of the Earth’ is a chaotic head-stomp of a track that beats you down with its frenzied ape hits and wild, dissonant stringwork. This track will tear right down into your soul so furiously you’ll think the guitarist is scraping his fingers against your own bloodied ribcage.

‘Vacuous & Disjointed’ is a cavernous beast of ungodly horrors, churning tremolos and hellish, disembodied moans, if in slightly orgiastic throes. ‘Vehemence’ is the albums darkest, most violent star. It’s a heaving slab of dirty, raw, abyssal death metal with blast-heavy sections of rabid skin pummelling and chugging guitars. ‘Jahr Null’ kicks the debris of ‘Vehemence’ in your face and holds you down for another brutal lashing. Its frenetic double canon blasts of volatile guitars and clattering blastbeats will leave your head spinning from banging to the beat.

The duo also play with noise, with some tracks injected with audial fuckery and a few devoted to pure nightmarish atmosphere and great, chilling vocal passages. ‘Mephitic Seraph’ stands out for the simple reason that it’s the complete opposite to this and shows a different, lighter side to the band with a haunting yet beautiful ambience.

I Have Seen The Light, And It Was Repulsive is a devastating, claustrophobic slab of beat-your-face-until-its-pulp death metal. It’s barbaric, unapologetic and to-the-point furious. Sermon of Flames will cause cataclysm waves throughout the death metal world and if things begin like this they’ll not only set the bar but crush it to the ground too.