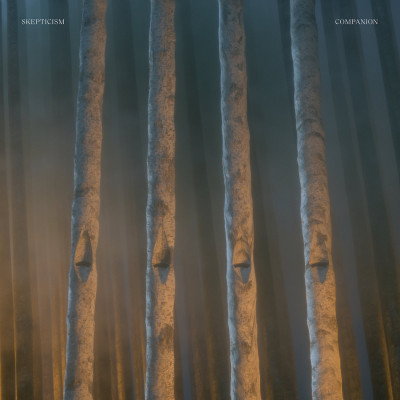 Skepticism release new album Companion for their 30th anniversary, leaving fans of slow slow metal excitedly wondering… are they ready to play the second chord soon? Jokes aside about the celebrated glacial pace of their funeral doom, actually this record, dare I say it, is considerably more upbeat.

The opener ‘Calla’ has all the bits you’d expect, the doom sound built around mournful/triumphant organ, and low roaring vocals. But despite the epic tones, it feels slightly over-busy and cluttered, at least for so early on in the record- this grandiose clamour that the listener is thrust into immediately is the kind of thing I’d more expect after 25 minutes or so of sombre build up. If there isn’t the slowness in the actual tempo or spaciousness in the sound that you might be more familiar with from the Finnish veterans, there is however an impressive kind of delaying pattern in the riffs, as they unfold certain patterns in complicated iterations that hold off and hold off the end of the phrase. There’s a similar feel to the highlight riff in ‘The Intertwined,’ which has a great slow death-y KERCHANG!!! guitar sound which chugs up and down a key change, before the full force of organ-guitar-and-croaking-vocals all come down in lockstep to create some of the most crushing moments on the release. And on ‘The Inevitable,’ the riff interestingly delays itself, with a revolving chord structure that refuses to resolve while the drums amplify the tension.

Again, on ‘Passage’ the funeral doom qualities come more from the deferred resolution of the riff, and its repetition rather than from just purely long drawn-out notes. I love the interplay in the rising combination of organ and guitars, but it does feel like there’s almost too much packed in, from a band where I expect mournful deep reflective spaces. There’s even a slight hint of tremolo-picking at first… when appearing in black metal the technique always has that fast-and-slow-at-the-same-time ambivalence of experience, but here it’s a small surprise to hear something even that frenetic in a Skepticism track. The track ends with a clang of a bell which heralds the dying echoes of the track, a great atmospheric moment. ‘The March of the Four’ is the best example of what this band have uniquely mastered, classic organ-led funeral doom, all gloomy shards of light in a deserted church with cymbals and drum thumps kicking up the odd footstep cloud of dust. You know what (eventually) happens next: yes, the dread tentacles of flailing horror burst through cracks in the masonry, i.e. a massive crashing doom riff slams in, slow and heavy like a wall caving in on top of you, and the rest of the track is a pleasing reprisal of that moment stretched out for the remainder of the ten minutes, making this for me the strongest track simply because it best represents the band I know and love.

It’s still Skepticism, which means the songs and the sound are impeccably judged in their creation, delivery and recording, and that sound is still ominous yet grand yet melancholy yet crushing. But I’m surprised to be left wondering… could they have created a bit more moody space? Resisted filling things in when they could have left things sparser, more ascetic? Even… played a bit slower?