(((O))) Review: The Body and BIG|BRAVE – Leaving None But Small Birds 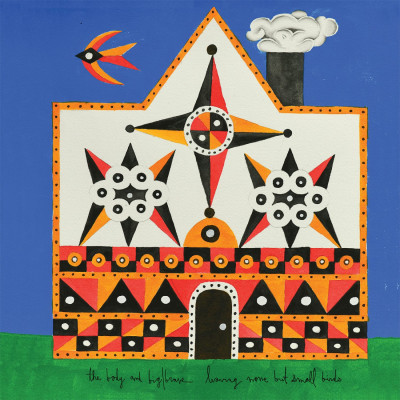 Leaving None But Small Birds by The Body and BIG|BRAVE

Expectations for this one were high from the minute serial collaborators The Body announced they were working with Canadian drone team BIG|BRAVE. They’ve risen impressively to those expectations with an album that both swerves and outruns them. On Leaving None But Small Birds two of the most exploratory metal acts dig down into the twisted roots of the old weird America and come up with the dirt of life beneath their fingernails.

Setting themselves the task of making a record outside the usual realm of either band, Lee Buford introduced the idea of doing something with traditional country and folk roots. Collecting lyrics and melodies from folk songs and hymns Robin Wattie has reworked them, drawing on common threads of experience that echo in the apocalyptic, sometimes archaic, language of The Body or the puritan minimalism of BIG|BRAVE. Not museum curios but emotional truths that still ring true. Songs of love and dread, songs of a hard lives beneath a pitiless sky.

They open with the eight minute, one chord drone and lament of ‘Blackest Crow’. On the face of it not that far from something BIG|BRAVE might do but with Wattie’s voice and lyric to the fore, the instrumentation subtly pushing the track along. Musically very little happens but it never dips, a thread of violin winding through its steady roll. The snap of drums opens ‘Oh Sinner’, interweaving another set of sparse guitar parts and carrying lyrical images from the book of revelation you could well imagine The Body using. The shift in instrumentation used on this album provides a change of texture and feel to its sound but what they don’t do is clumsily genre hop. Nobody is dressing up as prospectors or attempting to play bluegrass, thankfully. Different sounds are explored on each of the tracks here but blended with their own approaches and in such a way that the album feels a coherent whole.

‘Hard Times’ begins with shruti box drones and liquid guitar notes as Wattie laments the cold, endless, grind of work, all slowly overcome by a rising tide of amp hum and distortion. Amid a range of different settings Wattie’s vocals are the default centre of the record and her voice is well suited to the material’s traditional edge, bringing odd flashes of folk or country singers but nothing too strong. She’s occasionally backed up by drummer Tasy Hudson, but there are no duets with Chip’s distinctive scream.

Getting starker as it goes ‘Black is the Colour’ is pared back to just vocals and what sounds like auto harp, it’s the album’s most purely ‘folk’, moment. A stillness they contrast with the full force gothic of ‘Polly Gosford’s bull whip crack and chain gang trudge. An uneasy blend of penny dreadful fascination and stern moral lesson it draws on the tradition of ‘Pretty Polly’ and ‘Cruel Ship’s Carpenter’ providing the lyric for which the album is named. Dense and churning it’s what I always wish Woven Hand sounded like. A murder ballad, a haunting, a vengeance beyond death, it builds to a dark and wrathful storm.

Of The Body’s many collaborations (Uniform, Full Of Hell, Thou, etc) this one feels like the most complete merging of bands into an entirely new third entity. A remarkable coming together of noise metal pioneers to create something rich and unexpected. As with most of the previous ones it is greatly to be hoped there’s more than one album’s worth in it. On the closing ‘Babes in the Woods’ things begin to separate out again. The sweet and mournful post rock reverie of its first half fading to a vocal holler and a softly stamped rhythm. The babes abandoned in a cold, dark, world. Left to the mercy of fate with only one another to cling to.