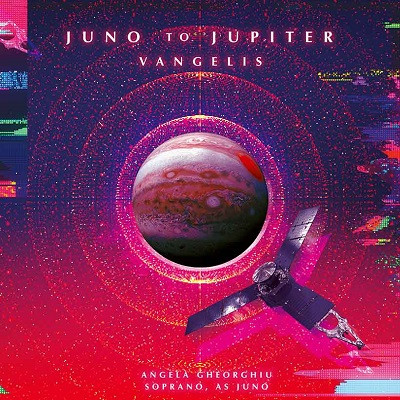 Juno to Jupiter by Vangelis

In a rare and exclusive interview back in October, 2016 from issue number 72 of PROG Magazine, Mark Powell asked Vangelis during the time he was promoting both the Rosetta album and the 13-CD box set, Delectus which covered his albums from 1973 to 1985 which includes the 1981 Oscar winning score to Chariots of Fire, why he remains torn between the commercial world of the music industry and his own work.

“The music industry grew massively over the years, having the sole target of making money.” He said, “Using disrespectively the most sacred and diving gift we have which is music. I missed the opportunity to be happy and relaxed when I had to deal with much of the music industry. I will always be inspired by the things around me and will continue to create music because it’s the most natural thing for me to do.”

Vangelis always wanted to take it a step further. Beyond classical, electronic, prog, and ambient music, he takes the listener on voyages that are beyond our stratosphere. Whether it’s the unsung geniuses of Aphrodite’s Child, taking us to exotic locations, collaborating with Jon Anderson, or envisioning the dystopian future of Los Angeles in the year 2049, you never know what he will think of next.

That and his follow-up release from the Decca label entitled Juno to Jupiter, which was inspired by NASA’s Jupiter mission via the Juno space probe, is an adventure beyond the fourth planet in our solar system. With opera singer Angela Gheorghiu lending a helping hand and sounds from the launch event on Earth, Vangelis is not only a conductor, but a captain on his own spacecraft to give Angela the right moment to sing when the space probe does something different.

‘Inside Our Perspectives’ has these unexpected sounds of joy and celebration. With soaring and swirling effects that go back and forth, there are some unexpected trip-hop beats that would make you hit the dance floor! Beauty, warmth, and calming vibrations, Angela’s vocals tugs your heart as she sends out signals from the probe to NASA’s Johnson Space center with ‘Juno’s Tender Call’.

I love how Vangelis uses his keyboards to make it sound like a classical string orientation with fanfare horn sequences, to let everyone know what is happening. And then, we hear darker themes on ‘Jupiter’s Intuition.’ It is a terrifying piece Vangelis uses to create a battlefield scenery with timpani beats that have a militant structure as if hell has arrived.

Then there is the film-noir sque vibes with an electro-jazz theme that sends out more mysteries than we expected for ‘Space’s Mystery Road’. You can imagine Vangelis continuing the stories of David Bowie’s character Nathan Adler from the Outside universe with its chaotic structures channeling Mike Garson’s piano work.

The looping effect of a helicopter-sque sound which was created for ‘Jupiter’s Veil of Clouds’, has these swirling synthesizers and echoing piano work to send out more signals to Earth before it transforms into a nightmarish dream that is like a terrifying monster about to be unleashed. With its timpani thunderstorms, it can send shivers down our spine.

Angela returns back to the space probe for both ‘Hera – Juno Queen of the Gods’ and ‘Juno’s Accomplishments’. You can imagine the clouds parting for her as she spreads her wings to fly home from Jupiter to her home planet. She pours her heart out in her vocalizations as if Vangelis gives out more cutes to continue her voyage home.

As she’s returning home, she’s sends out more signals to the space center by letting the crew members know that Jupiter is calm, quiet, and peaceful. But once ‘Zeus Almighty’ comes marching in, it sounds like something straight out of the Nintendo video game franchise, Metroid.

Fanfare vibrations reveal the great god of the sky protecting not only the human race, but he lays down the thunder throughout Jupiter’s dryland. The arrangements on here is a crossover between Igor Stravinsky’s ‘Rite of Spring’ and Danny Elfman’s 1989 score to Tim Burton’s comic book film, Batman.

Juno to Jupiter is an imaginative and mysterious release for 2021. Vangelis returns again for an operatic voyage behind what is happening on Jupiter’s landscape. There are moments on this album where I almost wanted to see what the duo would go to, but with its cavernous and labyrinth extensions, they are the passages of an expedition drive.