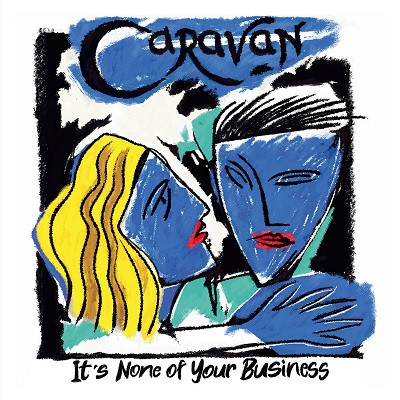 It's None Of Your Business by Caravan

2021 has been a very busy year for Caravan. This year not only it marks the 50th anniversary of their third studio album, In The Land of Grey and Pink, and an enormous 37-disc box set covering their legacy entitled Who Do You Think We Are? But they released a new album in eight years after their 2013 release Paradise Filter entitled, It’s None of Your Business.

Since their formation in 1968, Caravan are one of the most influential and important bands to come out of the Canterbury scene along with Egg, Gong, Hatfield and the North, and Matching Mole. Despite the various line-up changes, and having 14 studio albums in the can, It’s None of Your Business is a trip down memory lane for the band’s journey to see how far they’ve come.

Pye Hastings, Jan Schelhaas, Mark Walker, Geoffrey Richardson, guest bassist Lee Pomeroy, and Pye’s older brother Jimmy who appeared on nine of Caravan’s albums, plays flute on their new album. Listening to the opening track, ‘Down From London’ has this very bright sound. You can imagine waking up and seeing the sun in all of its glory with its soaring beauty.

Pye’s soothing vocals lends Walker’s foot-stomping drum work to give some skin as he lends Pye for the last few minutes to bring home the blues on his guitar solo while returning back to the Land of Grey and Pink once more thanks to Geoffrey’s violin flying towards the distance. ‘Wishing You Were Here’ is a train ride to unknown worlds.

While it has these dramatic vibes as we land on American soil, There is a lifting segment by the band writing a letter to their loved ones on how not only they miss each other on the other side of the pond, but reflecting on the good memories they have with each other between the past and the present.

The title-track is a stand-up for yourself composition. Richardson adds the intensive vibes between Pomeroy, Walker, and Hastings. He allows his instrument to three of the members in the band by releasing all of their energy they have to let it all out. And what they’re telling the music industry is that its none of their business to tell them what to do, they are their own music.

I love that little groove in the midsection where Caravan channels their psychedelic period in 1968 for a brief moment channeling the second track, ‘Ride’ from their sole self-titled debut album. It shows that Pye hasn’t forgotten his roots with a little twist of lemon by adding a symphonic structure throughout the passages of time. And then after that flash-forward moment, Pye sings to the next generation with a romantic background to return to his loved one back home.

‘Ready or Not’ is a Brazilian samba. Richardson knows his Bossa-Nova vibe to dance in the hot, hot sun with a cat-and-mouse chase whilst the band channels Gentle Giant’s ‘Isn’t it Quiet and Cold?’ as ‘Spare a Thought’ is Caravan’s song to their fans with a gentle acoustic rocking arrangement. It’s a way of saying thank you for being there with them throughout the good and the bad, and hopefully that their music will live on forever and ever.

‘Every Precious Little Thing’ sees Jan making his organ sound like a gospel theme inside a church to brighten up a new day. It talks about being on the road and performing at different venues. It can be pressuring at times of going from city to another. Rehearsing and preparing to perform in front of an audience.

It’s very much like Final Exam for Caravan. When they rehearse before the 8pm time slot, they have to be prepared and go over the set list of the songs they’re performing. And once the time slot happens, it’s like a test. And you can tell they got the audiences appreciation for what they’ve done for an evening’s performance.

Both ‘Luna Tuna’ and ‘There Is You’ is Caravan’s nod to Bob Dylan’s 1976 album, Desire. I love how Richardson channels Scarlet Rivera’s arrangement by adding the textures of ‘One More Cup of Coffee’ on the final track. I can imagine the band listened to the album to add a bit of both Jazz and a Dylan-sque approach to the closing number.

Pomeroy’s bass makes it sound like it’s the 1950s all over again in a smoky nightclub in Paris at midnight to see Thelonoius Monk, Dexter Gordon, and Paul Chambers performing. But it’s Jan’s piano work honoring the styles of Mike Garson from the Aladdin Sane period between the title-track and the closing, ‘Lady Grinning Soul’.

Caravan’s It’s None Of Your Business is the band’s story coming full circle. It shows how much they brought all of these ingredients they were making throughout the pandemic last year. For Pye Hastings who has been the heart-plug of the band, he’s keeping the legacy growing more and more. And no matter what, tonight the pigs will fly over grandma’s lawn again and again