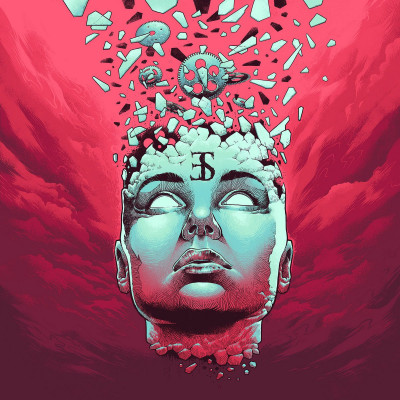 The Conquering by Employed to Serve

Burn your self-help manuals. Delete the meditation audio-book. Cancel the appointment with the shrink. Because Employed to Serve have a new album out.

Music with “core” in the description has long been a source of motivation or help to those with an interest in heavy music during tough times. The number of recovering addicts who cite Hatebreed’s shouted slogans as playing a part in their daily journey is testament to this. And if you had a penny for every fug that has been cleared by Converge, you’d be a very rich person. Heck, Black Flag’s ‘Rise Above’ – basically a far less eloquent version of the message Employed to Serve are conveying in The Conquering – was released 40 whole years ago.

The quintet from the unlovely town of Woking in south England continue this tradition (of resistance, strength in adversity and generally saying “fuck you” to everyone and everything that brings us down) in emphatic manner with their latest album. It features an all-new rhythm section (and guitarist) and it is very successful in hitting us right between the eyes with almost every song.

The mood of the album is encapsulated in the opening bars of the first song, ‘Universal Chokehold’. A plaintive guitar accompanied by a cello (yep, a cello) begin the song with a lonely yet heavy riff. The drums begin pummelling. Everything goes very, very metal. Justine Jones barks: “Everything you thought you knew. Turns out. To be. A lie!” And we are off.

The album is more straight-up-and-down than their previous release, Eternal Forward Motion, which was giddying in technique as much as heaviosity. This one still sports a (post) hardcore T-shirt, but wears its metal patch on its battle jacket. Indeed, there is more than a sniff of nu-metal among a few tunes – if you turn it up you can party like it is 2001. As Jones put it in a recent interview: “It is heavier, but more accessible, if that makes sense.” It does if you listen to the album.

By the way, if the mention of nu-metal made you a little bit sick in the back of your throat, please hear us out. A groove, guitars downtuned to B and a shouted a cappella line here and there are not inherently bad. In fact Employed to Serve say they consciously went back to the music of their youth as inspiration for this album. And when you do that, you’re only going to take the best bits, right?

And even though they went back in time to summon the muse, this album, for the most part, sounds more modern than a brand new Tesla. They have embraced dynamics (enhanced by the excellent, roomy production job by Lewis Johns) but still know full well the value of an expertly placed sub-sonic-boom-enhanced breakdown. And boy, do the guitars crunch. You want visceral? You’ve got it in shovelfuls here.

After ‘Universal Chokehold’ we are treated to ‘Exist’ which features gang vocals, a blistering guitar solo by Sammy Urwin (who takes on more vocal duties than on previous records) and a message we could all do with heeding, resisting the urge to “simply exist” because “there is light on the other side”. Man, if those lyrics were set to a Farfisa soundscape, we’d think we were the subject of an attempted religious conversion.

There are many other highlights: ‘The Mistake’ offers a compelling alternative to taking your own life. ‘Sun Up to Sun Down’ starts with a neck-wrecking stomp then ends with head-spinning speed. ‘Set in Stone’ sounds like an angry riposte to a massive arsehole (and judging by the lyrics, probably is). ‘World Ender’ is a slow, super-heavy staccato number that Gojira would be proud to have on their setlist (incidentally, Employed to Serve and Gojira are due to share a stage with New Zealand’s Te Reo metal outfit Alien Weaponry early in 2022) .

And the final two songs – the title track and the epic ‘Stand Alone’ close the album brilliantly. The former is a rousing metalcore anthem imploring listeners to conquer anything. To ‘Rise Above’ adversity, as Henry Rollins shouted all those years ago. And the latter begins gently enough – similarly to the opening track – but soon launches into a hardcore barrage, with all the breakdowns and death roars you require.

There are a couple of moments which don’t quite work on the album – we could do without the clean vocals on ‘Twist the Blade’ and ‘Mark of the Grave’, for example – but they take little away from what is an exhilarating trip. And by the end you feel empowered, better equipped to handle the hellscape that is planet earth. As Jones says in the opening track: “The way I feel – I know you feel it too.” Too right.