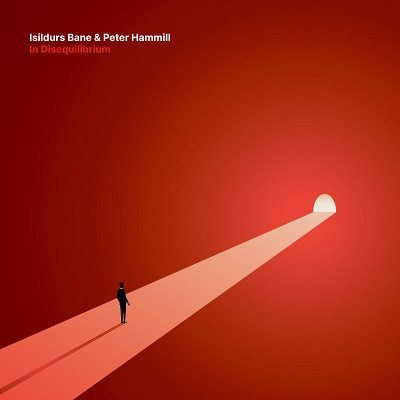 In Disequilibrium by Isildurs Bane

2021 has been a very busy year for Peter Hammill. There’s the Van der Graaf Generator box set, his solo album In Translation covering songs from Italian Pop, the Great American Songbook, Classical Music, and the Tango, teaming up with The Amorphous Androgynous with We Persuade Ourselves, We Are Immortal, and returning to the Swedish ensemble, Isildurs Bane.

Now, how long has it been since Isildurs Bane worked with Peter Hammill? I believe it’s been nearly two years since the 2019 release, In Amazonia which was a crazy ride I embarked on hearing from thanks to Sid Smith’s Podcasts from the Yellow Room many milky-way’s ago that I was introduced to. Well, they’re back again with a follow-up release, In Disequilibrium.

This is another challenge from the ensemble. It is one of the most surreal, wackiest, and insane releases I’ve listened to. There’s this crossover between ambient music, Frank Zappa, elements of the Rock in Opposition movement that blends well with the insane textures of both Gentle Giant and Goblin. And to be allowed to have King Crimson drummer Pat Mastelotto to lend a helping hand with the ensemble, it shows that Isildurs Bane are more than just a band, but a family helping others to bring In Disequilibrium to life.

The challenges inside the group’s labyrinth, just got even bigger! From the opening 3-part title-track, it is like a movie being brought to life. You can hear elements of ‘The Sleepwalkers’ thrown in along with the xylophones channeling the midsection of ‘Peaches En Regalia’ from the Hot Rats period. Mats Johansson is like a conductor giving his bandmates and Peter directions on where he wants them to go.

He has given each of the members, a lot of machine gun ammunitions to create these rapid firing textures. I can hear both Hällkvist and Croné doing these chase segments for Hammill to catch up to those insane time signatures to create this alternate score for Robert Clampett’s Bugs Bunny short from 1943, Falling Hare.

Then, Johansson and Katrine Amsler share this futuristic temperature rising for Hammill’s voice to come in at the right moment. It’s one of those crazy and wackiest sequences that visions the ensemble and Hammill transforming the second half into a chaotic groove!

The third and final section of the title-track takes us into the heart of the jungle channeling Peter Gabriel’s score to Martin Scorsese’s controversial classic, The Last Temptation of Christ. It gives us a sign for revelations to come where we witness a renewal to start a new chapter in our daily lives.

But it isn’t just that, it’s a new beginning for them to press the rewind button and start all over. Peter lets listeners know that there’s light at the end of the tunnel. And the big bright lights on the arrangements gives the ensemble enough rope to reach towards the surface and seeing the sunlight again.

The four-part suite ‘Gently (Step by Step) closes the album. It becomes a calm after the storm with its piano, synthesizers, and xylophone setting up the empty ghost town of the dystopian wasteland that people are finally getting out of. You can almost feel a pin drop as the ghost-like vocals fill the city with Eagles soaring through the sky moving away from the nightmarish landscapes into a field of dreams.

You can hear aspects of Peter’s solo work from The Silent Corner and the Empty Stage thrown into the mix. The symphonic structures along with its mournful organ work, Luca Calabrese’s trumpet echoes the funeral arrangements while Liesbeth’s violin sends the last rite to the city that once was beautiful, now a pile of rubble.

Once you get to the third section, it becomes this epic ambient voyage that carries bits and pieces of Popol Vuh’s Aguirre as the survivors are sailing into unknown lands. Peter then gives a sermon to the fallen heroes inside his church as the musicians help churchgoers bring joy and happiness in their lives.

They also have to understand that while they’ll never forget what has happened, it will be a part of their history that we will the next generation in the years to come, not to make the same mistakes again and again. In Disequilibrium is another welcoming return for the collaboration of Isildurs Bane’s partnership with Peter Hammill.

As I’ve mentioned earlier, it is beautiful, sinister, epic, and unexpected changes that will make your mind blown away. Yes it may not be everyone’s cup of coffee per se, but it is like a stick of dynamite ready to explode at any second.