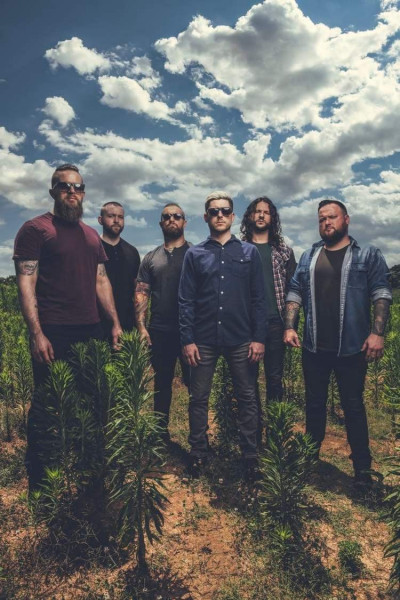 We like getting that reaction, just giving people a feeling of surprise is really cool.

Whitechapel have just released their latest album Kin and it sees the band evolving their sound and creations music that sees them exploring a whole host of different emotions whilst still retaining their core heaviness. Gavin Brown caught up with guitarist Ben Savage to hear all about Kin and its creation as well as the story behind the album’s songs and videos they have released for Kin, touring with Cannibal Corpse and visiting the area that inspired the bands name.

E&D: Whitechapel’s new album Kin is out now. How excited have you been about getting the album out there?

Ben: Oh, very excited. I mean, we started writing during the start of the pandemic around March and then recording started in September. Then we ended in January, and we’ve been sitting on the album all year, so it’s exciting to finally get it out, so get some feedback, you know?

E&D: What’s the feedback been like so far for Kin?

Ben: Really good and positive, people were shocked when we released a song like ‘Orphan’ that was very unexpected, it’s cool. We like getting that reaction,  just giving people a feeling of surprise is really cool.

E&D: How did the recording process of the album go?

Ben: Well, it was during COVID and we really focused on writing the record. We were all social distancing and we all weren’t working at that time, so we would just all get a week to record for or just write and then take a couple weeks off and reflect on the material that was written and then we’d come back and enhance the material that we wrote. We just kind of repeated that process, a week working, two weeks off, a week working, two weeks off. We just did that until the record was finished, that took a few months of doing that and distilling everything down and just getting it getting it going, once we finished the first song which is the first track on the record once we’ve finished that song, it started falling more into place and it just took getting over that initial hump.

E&D: Is that how you’ve worked before?

Ben: Yeah. We’ve always done it since our self-titled record in 2012. Except we had more time now since we weren’t doing any touring.

E&D: What does Kin, the album’s title and the artwork refer to?

Ben: Kin refers to two cells that were inside of Phil, our singer, who’s telling the story. It’s direct continuation of The Valley. It represents him as a teenager and him manifesting this evil self and battling this evil self from his true true reality. The whole record is a linear storyline, so it starts at the beginning and ends with the final track. It’s just an epic battle between himself, an internal battle. That’s why the album cover is blue, it’s like the rare colour in nature, so it gives more of a celestial and otherworldly look to it. It’s polarised, like stardust merging together, because both of those characters are the same person, but one of them is the evil self, that’s the negative space on the record cover. If you turn it upside down, there’s a demon in there and that represents the evil that that’s flowing into Phil’s true reality.

E&D: You released the song ‘Orphan’ ahead of the album release. Can you tell us a bit about that particular song and what that’s about? It’s a very striking song.

Ben: Yeah. It takes place at the halfway stage of the record and by that point Phil’s evil self merged realities has just infiltrated his real reality and tried to mess it up and tried to annihilate it. That happened in the previous track ‘To The Wolves’, so the next song is Phil just coming to grips with the life he’s been dealt and what’s happened. It’s more of a vulnerable and reflective song before the next track, Without You, which is the battle between two selves. ‘Orphan’ takes place along the linear line of the record. ‘A Bloodsoaked  Symphony’ earlier on in the record tells of Phil’s evil self resurrecting his parents but they weren’t really his parents, they were shells of themselves, so that’s Phil and ‘Orphan’ is coming to grips, like, this is not you, it’s a very sad and vulnerable song.

E&D: You have done music videos for the songs in the album. Would you ever consider doing a graphic novel or something similar based on the songs from the album and the story it tells?

Ben: Yeah, that would be cool. On Spotify, we have different artwork for each song, in that aspect, it plays out like a graphic novel in some way. It would be cool to embellish that and do like a full comic of it. I think that would be really, really cool.

E&D: Can you tell us a bit about the videos that you’ve done for ‘Orphan’ and ‘A Bloodsoaked Symphony’ and what they’re about?

Ben: You know, we felt that ‘Orphan’ was a good representation of this new album, it has a hand of our older sound, but with a new twist to it, and new, emotional weight. The video represents what that whole song’s about. Phil’s evil self resurrecting, his parents and and sacrificing his stepfather to the ancient God, which is the eye on the cover of The Valley. In The Valley, he talks about his stepfather and you know, his hatred towards him, so in ‘A Bloodsoaked Symphony’, he sacrifices him to the eye to resurrect his parents which in turn, becomes the evil self. The ‘Orphan’ video is a reality, so it’s kind of like a polar opposite to it. That’s what that’s about.

E&D: You’ve got a new drummer in Alex Rudinger, who was your tour drummer, but now he’s a permanent member. How is he and the new lineup working out?

Ben: I mean, he’s definitely working out, he’s a great drummer and he’s real professional. He hits super hard and is really creative. We write the music, and we write drums to it, but he does his thing over the top and, steps it up above and beyond, so you know, we are very happy with that.

E&D: You are headed out on the road with Cannibal Corpse, Revocation and Shadows Of Intent next year. Are you looking forward to that tour?

Ben: Yeah. I think it’s going be a great tour to get our sea legs back, you know, and play to great audiences. We are all fans of Cannibal Corpse and there’s just massive respect there. It’s great to honour their legacy.

E&D: Will you be heading over to the UK and Europe next year too?

Ben: There’s talks about it later next year, so we’ll see if that works out, you know? It  on pandemic and everything.

E&D: You’ve toured with Cannibal Corpse before. How was the experience of touring with such a legendary band as them?

Ben: Yeah, we toured them before on the Mayhem tour and they’re just humble guys. Really, really cool. George is great. He’s a funny dude, Alex Webster, he’s really chill and he lifts weights. I lifted weights with him out in the parking lot and hung out. They’re all super chill people.

E&D: Who else have you loved touring with in the past?

Ben: I love touring with Revocation too. They’re my boys, one of my closest friends is their bass player. it’s hard to pick. There’s a bunch of cool, cool people out there!

E&D: have been some of the most memorable show live shows that Whitechapel have ever played?

Ben: Oh, man, we played in the Philippines one time in a stadium, which was crazy, the biggest show we’ve ever played. There was pyro and stuff. I’d say that was the biggest craziest and place we ever played.

E&D: The band are named after the area where Jack The Ripper committed some of his crimes. Have have you have visited the Whitechapel area when you’ve played in London?

Ben: Yeah, I have. I’m the only member that has, back in like 2008. We played London and I took a train down there with Freddy from Carnifex and we just walked around the area, there was just a big flea market going on there, selling cheap stuff, like DVDs. It wasn’t anything exciting. We never saw any Jack The Ripper things or anything, we just walked around. I mean, it was cool. We did go to Whitechapel chicken, and it was awful. It was literally the worst chicken I’ve ever had!