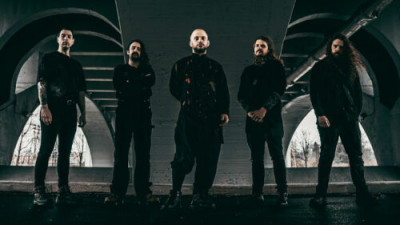 I think we've evolved to just do whatever we enjoy as listeners and as players, experimentally as well as progressively, we've changed.

With their new album The Work, Rivers Of  Nihil have created a sprawling and epic collection of progressive death metal songs that is up there with the years best. Gavin Brown talked to Rivers Of Nihil drummer Jared Klein to hear all about The Work and how it came together as well as hearing about the the evolution of the band and being back on the road after so long.

E&D: Your new album The Work is out now. How did the creation and recording of the album go?

Jared: It was good. I live on the opposite side of the country, then the rest of the guys flew over and we were in the studio for three weeks and I knocked out drums in two days. After that, we just kind of focused on the guitars and tone and then bass and vocals after that. I don’t know, it was like an easy process and it kind of flew by since we were in the studio for most of it.

E&D: Did the pandemic hinder the process at all?

Jared: It was a little different, we started recording in November of 2020, so it was a little nervewracking because we were trying to stay safe. We were all wearing masks and we were just being cautious, staying in hotels, making sure that we didn’t have COVID and taking tests when we needed. It is still a little different now, It’s a part of the experience and a part of the work. In our picture book that we have that comes with the album, you’ll see that we’re all wearing masks in the studio and stuff like that.

E&D: Did you always want this album to be so diverse musically? It’s still so heavy, but there’s lots of different sounds going on.

Jared: Yeah, there’s a lot of different sounds. Mostly I think it was cool that Brody had an idea to come up with field recordings and putting that inside the album because, once you hear the field recordings that he did, you could kind of hear it in the album as well and it kind of makes it a little more special in our eyes, I would say.

E&D: Do you feel that this work is your most epic album to date?

Jared: I would say so. Yeah, especially Terrestrial IV: Work, that’s got a lot of crazy stuff in there and it is our most experimental song. I mean, there’s this part where you hear just drums and I’m screaming in the background as I’m playing those drums and I’ve never done that in the studio before. I thought it was pretty fun.

E&D: What does the cover art represent and what are the songs on the album about?

Jared: The album art, it’s kind of like the end of the world. Everything’s kind of freezing over. The train at the beginning of ‘The Tower’ is basically the crashed train on the album. It’s all kind of an adventure itself and it’s also open to interpretation, but I would’ve to say most of it has to work working because that’s all we did during the pandemic, you know?

Jared: Yeah, I mean, I would listen to it every day, like all the pre-production and stuff like that and once we got the masters, I was listening to it every day to help me get through work.

E&D: Did you feel any pressure at all following up a successful and well received album is Where Owls Know My Name?

Jared: Yeah, we were a little nervous, as most musicians in this world, we have a lot of self doubt, so we we were doubting ourselves a little bit, but you know, I did think of some positive ways to kind of get that outta my head. I tried to encourage the dudes in Rivers as well to just maybe say it’ll be better. We’ll see when we get the results, and thankfully, you know, we did, we did really awesome. We’re all happy about that.

E&D: Have you been pleased with the feedback the albums had so far?

Jared: I’ve seen nothing but positive reviews and obviously we’re all stoked about it. We’re happy to finally get it out. It’s been like two and a half years, I think.

E&D: You’ve recently released a video for the album track ‘The Void From Which No Sound Escapes’. Can you tell us a bit about the the video?

Jared: Yeah. we recorded at an abandoned community centre. I think when the Spanish flu was a thing, they would bury and put all the bodies into the sub-level of the community centre, which is now a basketball court. I heard there was a lot of haunting there or something like that. We ended up recording in the basketball court area and we also recorded in the amphitheater area that was all in one building, which was cool.

E&D: It has been eight years since your debut album came out. How have Rivers Of Nihil evolved as a band since then?

Jared: I think we’ve evolved to just do whatever we enjoy as listeners and as players, experimentally as well as progressively, we’ve changed. We’re kind of just showing everyone what we could do, I guess, what we’re capable of.

E&D: How did your recent tour with The Black Dahlia Murder and After The Burial go and what were the highlights of the tour?

Jared: Oh, I loved it. It was so fun. It was great to get back on tour and meet idols, all of us got to meet everyone that we have been listening to for a very long time. I think the highlight was playing near my hometown and also playing in their hometown, seeing everybody’s happy faces while we played was a highlight every day, truthfully.

E&D: Did you play my much new material?

Jared: Yeah, we played we played ‘Focus’ and ‘Clean’ for most of the tour, then we added ‘The Void From Which No Sound Escapes’ for the last couple days of the tour and Zach who did saxophone on the album actually performed with us on the last two days.

E&D: How good did it feel to be back out on the road and was there a bit of trepidation at first or did it all go go smoothly?

Jared: Yeah, it went pretty smooth, the first week it kind of took me a little bit to get used to because it was just kind of outta shape, since we weren’t able to tour for almost two years. I would get outta the van and start unloading and then I’d be like, what am I supposed to do? Haha! Once so got into the swing of things, I was totally fine. Everything was great.

E&D: What was that for first show back like, seeing an actual audience out there again?

Jared: I was pretty nervous, we just got new monitor rigs, so we were just trying to get used to that which took a couple weeks, but you know, we did it, we nailed it, so I’m pretty, we’re all happy about that too.

E&D: You are playing at the Arctangent Festival in the UK next year. Are you looking forward to that show and what your touring plans between now and then?

Jared: Yeah, I mean, I’ve been looking forward to this for two years because we’ve announced that we were doing it 2020, and then it got rescheduled this year, and now we’re playing it next year. Yeah, we’re all stoked. Nothing’s really in the books at the moment besides the rescheduled Euro co headliner that we have with Allegaeon that’s at the end of 2022.

E&D: Are you doing any more festival dates before that at all too?

Jared: We might be doing something but really don’t know yet. Nothing’s really set in stone. So far the only thing we have at the moment is the headliner next year with Allegaeon as co-headliner.

E&D: What have been some of the highlights of your time in Rivers Of Nihil so far?

Jared: You know, just playing to people, making people happy. People enjoying our music and I started singing on Owls and The Work, so it’s great to hear that people accept and enjoy my voice and change with the band so It’s cool to be a part of that.