(((O))) Feature: Echoes of the Past: Renaissance – Scheherazade and Other Stories 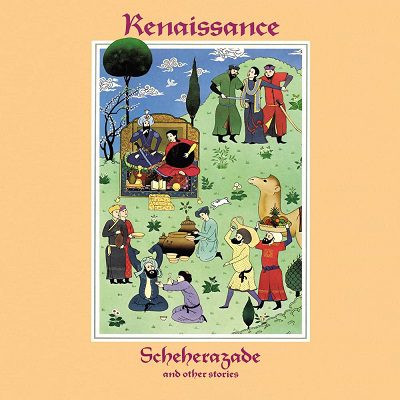 “I took a trip down to look at the fair / When I arrived, I found nobody there / It seemed I was all alone / Must be that they’ve all gone home.” The opening lines on the lullaby-sque song of Renaissance’s ‘Trip to the Fair’ gives you an insight that you can have all the fun you want, ride the rides, no massive crowds, and imagine yourself from that moment, it will be with you, forever and ever.

Renaissance had been very busy when they released their sixth studio release originally on the BTF label in the UK and on the Sire label in the States entitled, Scheherazade and Other Stories in 1975. This was the very first album that the band didn’t use classical compositions and not featuring songwriting credits.

Based on the collection of middle-eastern folk tales during the Islamic Golden Age compiled in Arabic as One Thousand and One Nights, or known in English as the Arabian Nights, Renaissance took a step further to bring parts of the stories to life in an operatic form. Now the 24-minute track is not based on Rimsky-Korsakov’s composition, but there’s a bit of the pattern that goes with it.

Now reissued in a 2-CD/1-DVD set, it is time to revisit the stories that are brought to life. Recorded at Abbey Road Studios, where the Floyd were recording their follow-up to Dark Side of the Moon with Wish You Were Here, Scheherazade is a spectacular journey beyond your wildest dreams that is told throughout this orchestral structure that the band have brought to the table.

From the moment John Tout plays this Tchaikovsky-sque introduction on ‘Trip to the Fair’, it starts off as an overture where the story begins. It starts off slow but then it gets into a mid-fast tempo as Camp’s bass and Sullivan’s ticking hi-hat follows Tout’s concerto piano playing in hot pursuit while Haslam’s vocalisation sets up the construction of the carnival that is waiting to be opened.

As the gates open, you feel that you are a kid inside a candy store, eating the ones that you liked. Annie’s vocals are so touching, you feel that she’s watching over the one person having a ball inside the Fair’s answer to Disneyland. With its Waltz-like carousel organ structure, the band come marching in to lend Annie a helping hand to bring these massive wonders brought to life.

Then the midsection is transformed into an alternate score to Vince Guaraldi’s A Charlie Brown Christmas thrown in as the band channel his textures to have this jazz-like skate across the ice. ‘The Vultures Fly High’ has these intensive arrangements from Camp’s bass setting up the heat gage going upwards to reach a maximum level with pounding piano work while Annie and Michael are soaring through the heavenly skies.

‘Ocean Gypsy’ features these Crimson-sque arrangements on the acoustic guitar done by Michael Sullivan as he honours the song ‘Epitaph’ for inspiration. Annie describes the imagery of a lonely woman being alone on the moon, knowing that she has seen a lot and been though the heavier times, but wants to be free and get a second chance for good reasons.

It sounds almost like a folk song that Annie could have written for Judy Collins for her next album, but adding the symphonic beauty to bring both classical and folk music to life in this song. Now we come to the closing 24-minute epic, ‘Song of Scheherazade’.

This is where they are creating this imaginative animated movie that is sung throughout the entire structure. It would have given Disney a big shock for what Renaissance have done. From the moment the epic-like prelude begins thanks to Tony Cox’s orchestra arrangements, we are inside the palace as Camp and Haslam sing to the young Caliph as they begin to tell the excerpt stories of Arabian Nights.

Since I’ve mentioned it as a sung-through animated movie brought to life done in the styles between Richard Williams, Hayao Miyazaki, and Paul Grimault, it is spectacularly envisioned from the band’s textures on what is happening next into the stories. From the acoustic-folky-string sections of ‘The Young Prince and the Young Princess as told by Scheherazade’ in the styles of Joni Mitchell, to the fanfare feast with a sun-rising swift across the entire city on ‘Festival Preparations’ which has the chefs cooking at rapid speed in a Gershwin-sque twist from Camp, Dunford, and Tout.

Then everything comes to a full climatic ending between ‘Fugue for the Sultan’, ‘The Festival’ and ‘Finale’. This is where the marriage comes full circle after the massive feast the crowd after going through the stories they went through from beginning, middle, and end. You knew that this was an event the Prince and the Princess were made for each other as it gets brighter and brighter until the end.

The second disc contains a performance the band did at Nottingham University on January 24, 1976. It was originally released as British Tour ’76 in 2006 on the Major League Productions label, is now given the full opportunity to be a part the Scheherazade reissue. The band were doing a tour during the ten date British University tour that was recorded for a live radio broadcast.

Listening to the recording, you can just close your eyes and imagine yourself being at the University as a student in Nottingham, the same place where Premiata Forneria Marconi did their live set promoting their Chocolate Kings album, but this is where you really show your support for Renaissance at the venue. Not only they storm through Nottingham with classics such as the thrilling roller-coaster ride of ‘Prologue’, ‘Running Hard’, and the pearly gate opening introduction to start the show off with ‘Can You Understand’.

The two epic suites between ‘Song of Scheherazade’ and the closing ‘Ashes Are Burning’ which is the epic that refuses to die, it gives College students a big run of their money. Despite the Punk scene rising in the middle of London 1976, the Nottingham students give Renaissance a warm reception during that time frame. They weren’t big like Yes, ELP, and Genesis, but a band that made a whole lot of sense and give the audience a lot of hope inside their hearts.

This is quite an amazing reissue that gives Scheherazade and Other Stories the treatment it deserves. And I hope there’ll be a few more Renaissance reissues to come in 2022. But let’s take a trip down to the fair, and fly on our magic carpet to hear the stories of the Arabian Nights once more with an operatic form.