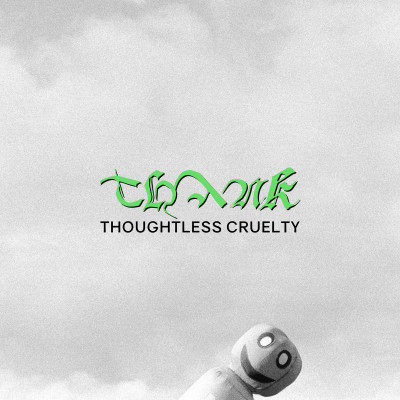 “There’s never been a good band from London.” So begins the trolling chorus of Thank‘s recent single ‘Dread’ an irresistibly elastic bundle of sonic scraps and irritation powered by a relentless bass churn. Playful, provocative and enjoyably wrong it’s something of a distillation of the band’s appeal. Thank are a bunch of awkward young smart arses from Leeds (which, by way of mitigation, receives the same unfair assessment of its musical heritage a couple of lines later). They bristle with ideas and mischief, playing an overheated mix of ugly electronics, widescreen guitars and crackling percussion, even the odd blast of sax skronk now and then.

Thoughtless Cruelty might not live up to the tongue-in-cheek, scorched earth denial that “there’s never been a good band that’s ever been alive” but it does at least sound like it’s from the 21st Century and not yet another tumble into the 70’s/80’s/90’s box of second hand clothes. ‘Dread’ sets about renting a haunted house but twists towards the thought that an atmosphere of stomach gnawing unease might provide inspiration. It’s not hard to read it as a search for a musical space that’s clear, stepping into a scene weighted with past glories but acknowledging the ghosts instead of pretending you can’t see them. ‘Dread’ is the track where they most remind you of The Fall but it’s not suffocating, more a general sense that Thank are one of the many bands who would not exist in quite the same way they do without them, it’s just part of the furniture in their world. Don’t sit there lad, Mark E Smith’s ghost’s in that chair.

There’s plenty about the nature and value of performance elsewhere too. ‘Good Boy’ kicks off with “My life got so much simpler when I made the wise decision, to only consume art that pats me on the back for being a good boy, a good boy”. A pumping electro rager it features a musical/emotional breakdown in a stairwell and gets extra points for squeezing the word ‘ineffectual’ into a tirade of scorn about appropriate cultural diet and wet liberalism. ‘Punching Bag’ turns over performance as a form of self abasement before a baying mob. Reworked from their debut EP it’s tighter and, erm, punchier, channelling turn of the century talent show TV and pithy colloquialism into the magnificent line “Tonight Matthew… I will shit in my own hands and clap.”

Having previously recorded everything basically live, lockdown forced a different way of working on them, allowing for more layered compositions and what feels like more clarity, a sharper edge. The irony being that the result often has a convincingly live feel and certainly promises to work well on stage. Possibly their secret weapon in the battle against the power chord-centric is Theo Gowans who has also released hours upon hours of weirdo electronic noise as Territorial Gobbing and brings a wide and ever shifting sound palette to their songs. In ‘Very Cool’ after a couple of minutes of rinky-dink keyboards vocalist Freddy Vinehill-Cliffe looks around asking “What’s good about this? Why is this good?” as feedback squeals, the band crashes in and his vocals go into Gibbytronic meltdown. It’s one of many great moments.

‘From Heaven’ lifts from ‘Nearer My God To Thee’ as featured in CNN’s Turner Doomsday Video for that final sign off. Guitars pitched between epic and noise it turns at to a baleful whine, the chorus an appropriately hymnal dirge “At the moment of death, my power comes from heaven.” Thoughtless Cruelty is something of an end of the world broadcast but Thank are not going gently. Furious and funny, lurid and surprising, it’s a righteous racket.