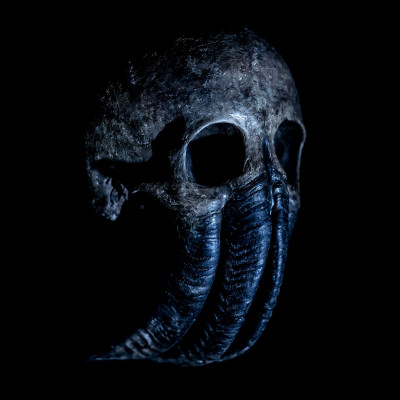 Plague God by Absent In Body

If the term supergroup is still being used then Absent In Body fits right in there and probably doesn’t need this introduction. Founded by Amenra guitarist Mathieu J. Vandekerckhove along with Neurosis vocalist / guitarist Scott Kelly the band is completed with the legendary drummer Iggor Cavalera of Sepultura and Colin H. Van Eeckhout of Amenra on vocals and bass. Whilst the résumés of those members are highly impressive the styles are actually of little relevance here. The four members remove themselves from past musical endeavours to create a massively atmospheric and oppressive doom album which has a harsh industrial breeze and heaps misery and space together quite flawlessly. Plague God is a battering expansive debut album which is going to live to the excitement the singles have aroused.

As a huge Amenra fan there was a curiosity to see if there were any similarities and apart from opener ‘Rise From Ruins’ and the spoken word vocals during ‘In Spirit In Spite’ there is no real repetition here. Most notable is the change in the vocal delivery of CHVE and also the drumming of Cavalera. The former sounds like a being possessed in midst of a failing exorcism as the vocals gruff and growl with a distortion from the normal anguished tone, especially in the abrasive ‘Sarin’. The latter plays at a glacial pace for the majority and the intro to ‘The Acres/The Ache’ is about as much rhythmic flair that is used before joining the rest on the slower path but this really drives Absent In Body.

The overarching feeling from the five tracks is a desolate, cold, dystopian soundscape. There is an industrial flavour to the drum tone and the surrounding synths which slither in and out. The guitars often ring in a harsh manner and the silence between moments of action fuel that foreboding feeling of a plummeting temperature. Even with that bleak demeanour some moments provide solace but they are short lived as evident in the middle of ‘The Acres/The Ache’ as a glitchy vocal harmony is soon engulfed by another crushing brick wall of doom.

Whilst Plague God avoids traipsing over the back catalogues of those involved it massively benefits from the members experience. The collective manage to make a doom record which stands out from a crowded genre with a palette of sounds supplemented flawlessly to continue to be heavy and oppressive but also feel unique and highly entertaining.