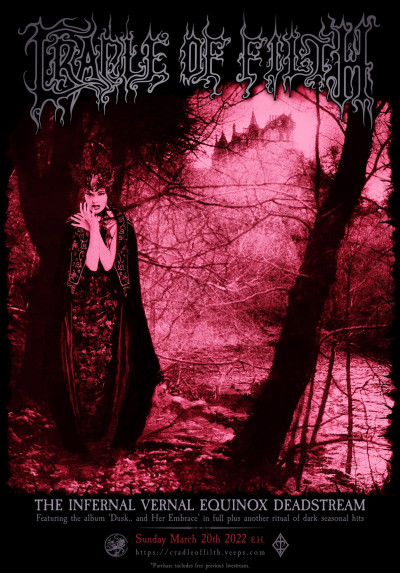 Cradle of Filth at Live Stream

Resistance is Futile, touring the US, and hosting a successful live stream, in 2021, Cradle of Filth – the most Marmite extreme metal band in England – return with a second live “dead stream”, playing their second studio album Dusk…and Her Embrace in its entirety, alongside some fan favourites, and a video premiere. It’s a full two-hour package that’s available to stream for a week afterwards, which showcases the breadth of Cradle’s oeuvre and the strength of their current line-up, in professionally shot live footage.

Dusk…and Her Embrace is the album which got me into extreme metal, all those years ago in 1996, and I’ve yet to hear anyone produce an album that oozes gothic grandiosity, rapturous romanticism, and vampiric aggression so perfectly without sounding ridiculous. (Yet, in possibly the nadir of my rock and/or roll career, I watched this live stream of one of my all-time favorite albums on the sofa drinking tea with a stinking cold. Not so much as a goblet of red wine in sight. But I guess you don’t need to know that…)

Swivelling order of the dragon logo; Hammer horror castle; virgin being sacrificed: looks like it’s starting. As Dani explains in the short interview that follows the main feature, the band’s first stream last year – a big production affair with an elaborate stage set, new video footage featured throughout, and shit loads of pyros – was received very well by fans, and we voted for another stream again this year. Cradle haven’t played some of these tracks live for years, so it’s really exciting to see how they sound. If the first stream was highly “cinematic”, as Dani describes it, this second stream feels a little more intimate, getting up close and personal with Dani and co., with camera-people visible filming on-stage, yet still featuring enough pyros, graveyard props, multi-angle footage, and video-montages-segues, to shake a skeletal mic-stand at. The set is graveyard by striplight, with twisted trees, dusty bones, and broken tombs; and Annabelle Iratni, the newest addition to the band, gets a railinged-tomb enclosure for her keyboard. We get a straightforward play through of Dusk; no mixing up the track order tonight. I don’t need to give a blow-by-blow account of this: the whole album sounds amazing. Every part nailed as per the record, performed with the panache of a more experienced band, yet not too polished. 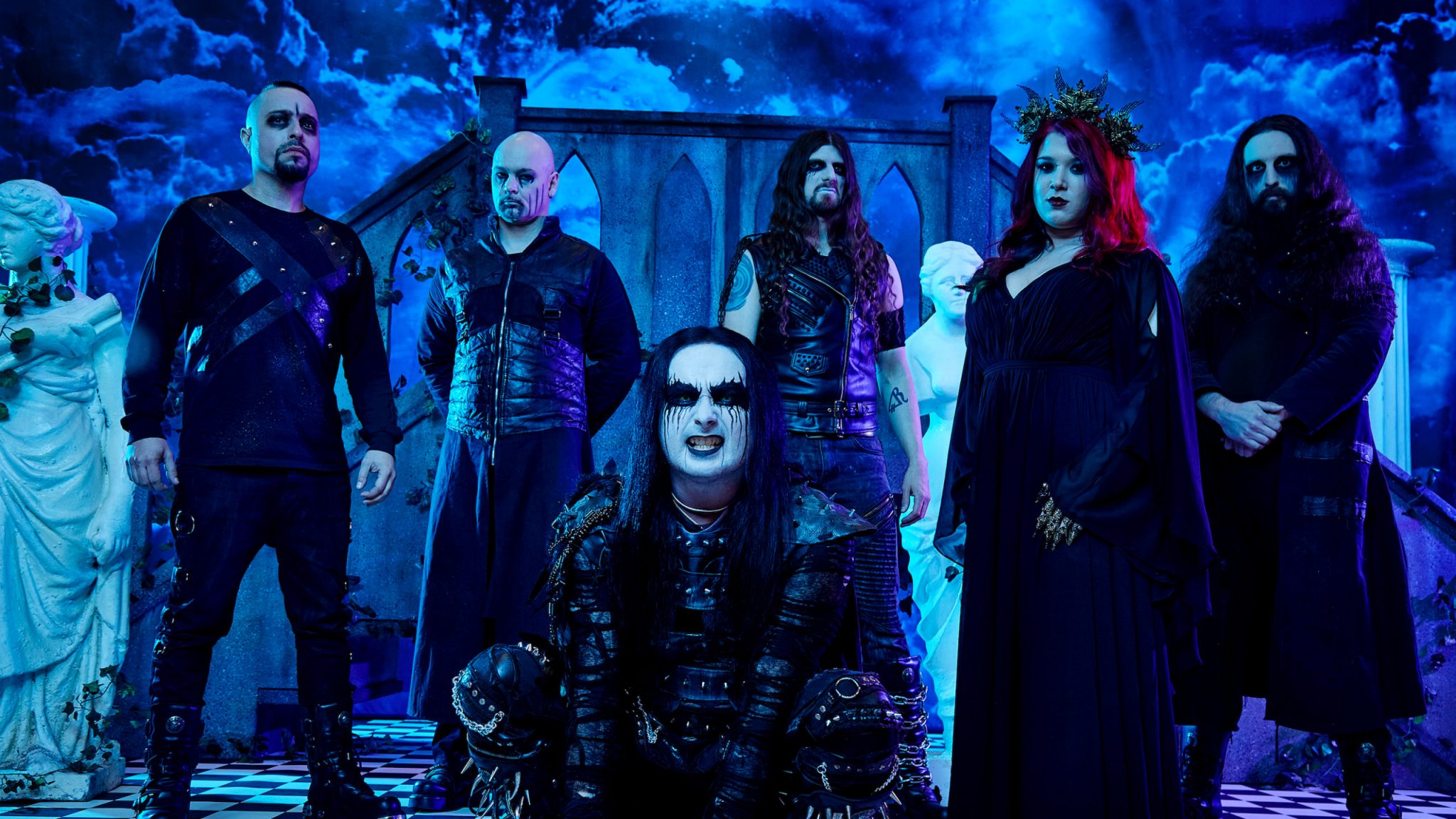 Let’s have some highlights. The female vocals have always played a subtle yet essential part of the Cradle sound, and Annabelle’s parts sound superb, nicely prominent in the mix, especially on ‘Heaven Torn Asunder’ where her voice merges with Dani’s: “I hold the prophet’s head unto all nations”. Followed by ‘Funeral in Carpathia’, you’ll want to rewind Dani crying “Never leave me!” over Ashmok’s tapping solo. With ‘A Gothic Romance (Red Roses for the Devil’s Whore)’, I’m reminded yet again why I regard Dani as one of the best and most accomplished vocalists in extreme metal: he’s excelled even his own talent for evil screams here, somehow adding yet another subtle twist to his mercurial style: “Portrait of the dead countess!” Annabelle’s vocals sound especially clear on ‘Gothic’: your what may twitch against my kiss, exactly? Wash your mouth out, young lady…

I always liked how Dani slips in some low-key Shakespeare on ‘Nocturnal Supremacy’: “to sleep, perchance to dream”, this time over a nicely enhanced version of the original bass solo. The guitars are also trading lovely breaks over the brutal bits at the end of ‘Nocturnal’, as they do on ‘Malice Through the Looking Glass’, harmonizing over high, melodic bass lines. On the magisterial title track ‘Dusk and Her Embrace’ itself, Dani lets slip a genuine little grin at one stage, which says it all: yup, we know it still sounds sick. Oooh, pyros; tasty drum solo!

Okay, so my one whinge: ‘The Graveyard by Moonlight’ – largely keys and atmospheric-female vocals – may be a little bit of a breather before the next full-band onslaught, but it’s an essential part of the album; and I could have done without the cheesy CGI graveyard video montage. I’d have loved to see Annabelle performing it live. Still, nil desperandum, the finale of ‘Haunted Shores’ sounds amazing, with Dani performing Chronos’s rallying war speech to perfection: “the principle black metal master plan…eeeurgh!”

Cradle should release this as a live album, for sure; while there are two versions of Dusk already available (in 2016 they released The Original Sin, an earlier “lost” mix), there’s still a place for a slightly rawer, live version with the current line-up: easily their strongest for years. Don’t go away: this is a full two-hour stream. Next is a brief couch interview with Dani, reflecting on Cradle’s two live streams, noting that tonight’s is dedicated to Dusk’s original producer Kit Woolven who died recently. Now it’s the world premiere of the third video from their latest album Resistance is Futile, the track ‘How Many Tears to Nurture a Rose’. Shot with a red, black and white color palette, it features split-tongue tribal folk, crucified demons, maggot-infested zombies, cataract-eyed creatures, a lesbian kiss, swapping black ooze, and – yes – lots of thorns. So business as usual in other words. It will hardly win awards for its subtle symbolism and intricate literary allusion, but you have to hand it to the band: in a thirty year career, they’ve done a great job of keeping things fresh without straying far from what they do best. An animated film of the artwork from Resistance, which – with its Bosch-inspired artwork – makes for a nice little interlude, before the band’s back onstage for a few more tracks, largely drawn from the latest two albums with some Cruelty era material thrown in for good measure.

While, clearly, we all hope the world stays healthy enough for live shows to continue, I do also hope that Cradle and other bands keep doing live streams. I was lucky to catch Cradle live out in the Real at London’s Roundhouse last year, but am still happy to pay to tune in from my sofa (surrounded by tissues and paracetamol). As Dani explains, “If this goes well, we’ll carry on with this trend and do other albums in their entirety as well.” And whether it’s live on stage or live on stream, I’m sure legions of Cradle fans will jump at the opportunity.