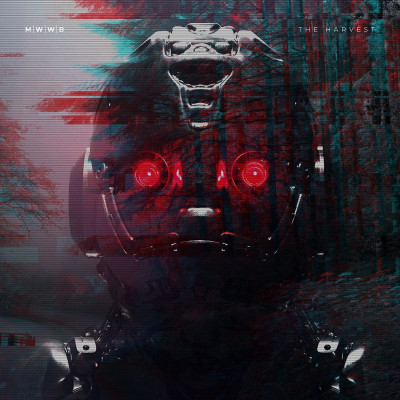 The Harvest is a continuation or rebirth, depending on your perspective. Fourth album by Mammoth Weed Wizard Bastard, the band is now known as MWWB. So under this slimmed-down moniker it’s a debut, but also a new album by a Welsh institution we know and love. Guitarist Dave has had a bad time of late, suffering from a stroke post-COVID that involved an induced coma, but he is recovering well. This is the album that was recorded before Dave was ill, and it stands as a testament to his work and talent.

There’s lots to love on The Harvest, which shows a continuation of the band’s trademark sound, style and guitar tone that made previous outing Yn Ol I Annwn such a sublime listen. There’s a crop of bands who use slow, heavy riffing to maximum effect that have managed to rip the ‘doom’ tag away from pure metal and turn it into something beautiful. The bludgeoning wall of sound made by the likes of Italians Ufomammut, for all its shock and awe, is a million miles from the subtler approach of newer kids on the block such as Elephant Tree, Garganjua and definitely MWWB, who use light and shade, nuance, lots of melody and a delicate touch. Plus, of course, a ton of riffs. MWWB have the added bonus of the gorgeous, drifting vocals of Jessica, which adds another dimension and lifts the music further.

Yn Ol I Annwn was a superb album, and quite a daunting one to follow, I expect, since it’s practically flawless. On first listen to The Harvest I admit to feeling more than a little ambivalent, as the sound is quite similar and it felt like Yn Ol I Annwn round 2. But along with the name change the band have taken a large step sideways, incorporating all their trademarks at the heavy end of the spectrum, but introducing a ton of new ones in the form of esoteric psychedelia. The album features interludes like ‘Interstellar Wrecking’, a three-minute synth journey that has a little delicious note of tension that would work fabulously in a movie soundtrack (cue John Carpenter comparisons). This, melded around the gloriously heavy doom riffs of the track that follows it, ‘Logic Bomb’, works very well. That’s followed by the drum-led, pacey, Vangelis-like ‘Betrayal’, which again has a note of darkness running through it and which adds to the atmosphere.

All in all, my first impressions were wrong: MWWB have returned with an album that builds on past strengths and conquers new territories as well. The Harvest has crushing riffs, glorious vocal melodies and atmospheric passages that add colour and darkness, and it’s as perfect as its predecessor.