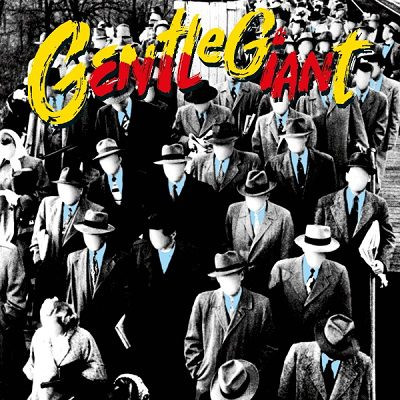 When you look back at Gentle Giant’s 52 year ride since their launch back in 1970, you can tell that they were a band that took the progressive genre a step further with odd time changes, medieval music, blues, jazz, classical, and hard rock rolled into one. They were the band that often got the recognition they deserve. But all good things must come to an end when they released their 11th and final studio album at the beginning of 1980 entitled, Civilian.

Originally released on the Chrysalis label in the UK, Columbia in the States, and reissued on the Alucard label, Civilian is finally getting the recognition it deserves. Now for me, I didn’t know what to expect when the album landed on my feet. I always preferred originally from the first album to Interview. But after a few listens of their last two albums from The Missing Piece and Giant For a Day!, they couldn’t just be a Prog band, 24/7.

It was time to go beyond the genre into a pop and hard rock sound, but keeping the roots in their origins. When Civilian was released, you can tell that the band was ready to call it a day. With short orientated songs and a traditional rock-like sound, the band decided to go out with a bang.

From the fast-driven adventures of John Weathers’ drum exercise, Ray’s thumping bass, Minnear’s synth-wave loop, and Green’s arena rock riffs on ‘Convenience (Clean and Easy)’, the band get down to business by going combining Aviary and Boston channeling those stadium-like atmospheres to get listeners up-and-running by reaching the finish line.

But Gary goes for those heavy blues attack by making it ‘All Through The Night’. The band gives him a lot of free-rein to bring down the thunder as Derek details the struggle on working not only from 9 to 5, but doing the night shift until dawn. Believe me, it can be a giant pain in the neck to get a lot of relax and sleep after a long day at work.

But once the manager needs you for the night shift, that’s where exhaustion mode starts to kick in. Not only you don’t want to get fired, but you badly want to be there and get paid, no matter what as the band channel some vaudeville-like dances for an off-Broadway show that would have given Cameron Mackintosh a big run for his money.

It then segues into the calm after the storm as we look at our ‘Shadows in the Street’. Kerry comes in to give Derek a chance to relax on his vocal arrangements as he takes us into heavenly sky, knowing that there is light at the end of the tunnel with his concerto-like intro.

Minnear’s vocals has these soft and relaxation arrangement that the struggles of working can take a toll, and he asks the question on while the work is hard, do we keep playing the game the manager forces us to do or make it through the light at the end of the tunnel? It’s a cliffhanger beauty, but it raises a question on the details on what’s going on.

Then, it’s back into the synth wave form again by reaching ‘Number One’ in the charts. Derek follows the light from the rainbow as Kerry’s keyboard follows his vocals in hot pursuit on while you are the ultimate winner, it comes with a heavy price.

Because success can be a real struggle and you have to come down at some point to pay the bills, the rent, and everything that’s happening in the real world by pulling your weight. And Derek lays down the reality check on its listeners on detailing the issues as the rhythm section just hammers down the law with a giant gavel to lay down the law like there’s no tomorrow.

Elsewhere Ray Shulman’s bass sends us down the rabbit hole for the dance hall in the ‘Underground’. With its crazy ‘Rhapsody in Blue’-like texture from Minnear and Weathers’ drum laying down another ‘80s exercise, it becomes this transfigure for searching another set of clues that Gentle Giant are on this case for the wheel to be set in motion before the camera-clicks like crazy as the paparazzi becomes obsessive of coming out of the bushes taking a picture of celebrities at their worst with ‘I Am a Camera’.

The band tackle the themes of the camera’s obsession of invading private lives of the celebrities whether at a club, festival, or with their family, it becomes a nightmare for them in this uplifting song for the picture to be in the tabloids or on TMZ. I love how Derek is narrating as the camera taking photos like a madman, not knowing when to stop as the band increases the temperature level to the very end.

‘Inside Out’ returns to the AOR sound as the band began this spiritual journey on finding their inner self. It’s like a whirlpool of beauty from Green and Minnear setting up the action as Derek opens one door after another from different parallel universes, but opening the last door as it reaches that glowing light that the band reach to close down the curtain for one more song.

They return to their Prog roots one more time on the closing track, ‘It’s Not Imagination’, but with a punky attitude. Here, Giant are having a blast poking fun at the genre with some nods to The Beatles and The Quiet Zone-era of Van Der Graaf Generator. I love how Ray and Gary are having a ball with Kerry, John, and Derek by going into town as they reach the finish line, knowing that their mission has been accomplished.

The bonus track, ‘Heroes No More’, which was originally reissued on the One Way Records label in 1997 of Civilian, is brought to life once more. It details on the people that we know and love from artists, superheroes from the DC and Marvel universe, have now become souvenirs that we see in malls, conventions, and online.

But as Babe Ruth once said in The Sandlot, “Heroes get remembered, but legends never die. Follow your heart, kid, and you’ll never go wrong.” And with the heart beating melodies, bass drum pounce, and thumping bass lines gives Gentle Giant one final hurrah before finally coming full circle.

After the album’s release, the album reached the Billboard top 200 at no. 203 as the band did a final tour promoting Civilian. And after that, the band called it a day. Yes, they could have continued following where Genesis, Yes and Pink Floyd were doing, but they knew it was time.

Civilian, say what you want about it, it is a perfect send-off that Gentle Giant unleashed. And this reissue here, as I’ve mentioned before, is the proper chapter closing that it finally deserves.