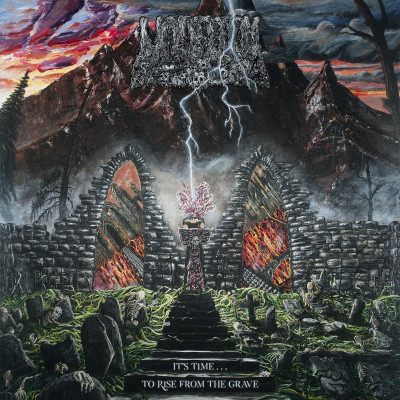 It's Time... To Rise From The Grave by Undeath

Brutal pummelling, filthy yet catchy riffs, a massive bottom end and guttural vocals: most of us know what makes a great death metal record. But there is one key attribute which is often overlooked; one which raises a record above the rest: the gore depicted must be specific. You can’t just say a face is smashed, it must be hammer-smashed. Sodomy is all well and good, but meathook sodomy, however, is on point. A murder? Passable. But a pick-axe murder is even better.

Undeath know their onions when it comes to laser-guided carnage. The title of their first album, Lesions of a Different Kind, simultaneously narrowed the field of grume and added an extra frisson of mystery. It is worth mentioning that it contained an excellent collection of songs in the finest Cannibal Corpse tradition (it is no accident that the aforementioned examples of specific bloodshed are all Cannibal Corpse songs – the lineage is clear when listening to Undeath).

And they have continued the pattern on It’s Time… To Rise From the Grave, their second effort. In the lead single, the head is not merely splattered, it is splattered seven ways. It is this kind of attention to detail that is important to discerning death aficionados.

And they have upped the levels in the songwriting department as well (yes, death metal songs involve actual writing). Lesions was a highly enjoyable homage to classic Floridian death metal, but in It’s Time… Undeath have found their voice – as well as some top-notch riffs, some of which could almost be called groovy.

The first two songs, ‘Fiend For Corpses’ and ‘Defiled Again’ are excellent throwbacks to old-school, brains-to-the-wall death metal, but it is when the title track begins that we see that Undeath are not content with merely rehashing the past.

It features galloping drums, a neck-wrecking breakdown and a roar-along chorus that will almost certainly get stuck into your head. And it is followed immediately by ‘Necrobionics’, which would be a crowd-pleaser played live. If there was such a thing as ‘death-metal riffs of the year’ award, then ‘Necrobionics’ would feature.

There are many other highlights, such as the death-and-roll groove of ‘Enhancing the Dead’ or the utter fury of ‘Funeral Within’. And a special mention should go to the genre-defining ‘Head Splattered in Seven Ways’, which has a spectacularly gory, blood splattered video to match it.

Undeath appear to revel in the cartoonish carnage that they inflict upon us. Hell, you have to have a sense of humour when it comes to any form of metal, let alone a sub-genre that delights in singing about zombies, unspeakable violence and zombies committing acts of unspeakable violence. And further evidence that they don’t take this whole blood-soaked mayhem all that seriously is the fact they offer beach towels with images of the album cover as merchandise. Beach towels!

Sorry, back to the music. The final song, ‘Trampled Headstones’ (again, not just ruined: these gravestones are defiled in a specific way, with the bottom of a boot) is another classic-in-waiting. Its thrashy beginning gives way to a breakdown that is heavier than an obese man on Jupiter. And after its long fade-out you realise that you have enriched 35 minutes of your existence with life-affirming death metal. What fun.