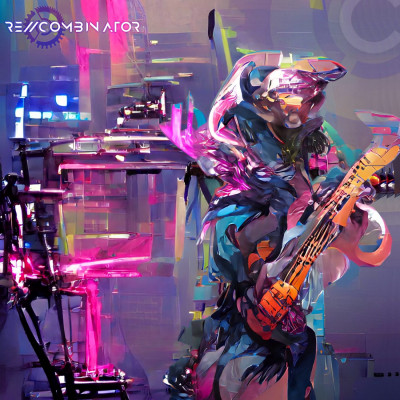 re// combinator by Combinator

Industrial as a genre the way Trent Reznor and NIN initially saw/heard it always had strong connections with prog rock. Yet at the same time, you can say the same about techno / drum & bass the way the likes of Squarepusher did too.

Actually this is exactly quite a wide ground Sean Fairchild, aka Combinator tries to cover with his latest EP, re//combinator. The EP itself is quite a generous offering of seven tracks, four new originals and three remixes, going on the heavier sides of all of the above-mentioned genres.

This thumping, heavier side probably has something to do with the fact that bass is Fairchild’s main instrument, although he never puts his vocals or synths and programming too far in the background.

Still, giving his bass a sort of leading role never ruins the musical balance Fairchild creates here, adding to the combination also bits of funk and heavy metal for good measure, and skillfully covering quite a wide musical ground without really making any musical missteps.

All this wide genre-bending might have something to do with the fact that Fairchild lived in highly disparate locales; Malaysia, France, China, Japan, and around the US. At the same time, Fairchild is able to easily jump over any possible obstacles that trying to cover too much ground in one taker can present. Oh, Emmy Awards might something to with that too.