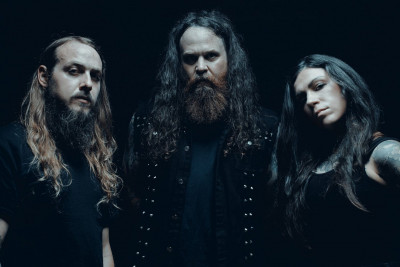 My lyrical subjects and vocals have stayed pretty constant throughout all the albums, but the playing style has gone through four years of extensive training and growth

YATRA play a mixture of doom and death metal which is as epic as it is heavy. The band’s new album Born Into Chaos sees their sound evolving into new realms of heaviness while retaining everything that you love about them. Gavin Brown caught up with YATRA vocalist / guitarist Dana Helmuth to hear all about the new record as well as their life on new label Prosthetic Records and the excitement of finally being able to play live again.

E&D: Your new album Born Into Chaos is out now. Are you excited to get this album out there for people to devour?

Dana: Oh yeah!  We are very excited. We’ve been so patient, but starting to get extra anxious – like a kid on Christmas morning, haha!

E&D: Was the recording of the album a smooth process?

Dana: Yes, it was very good. We had worked with Noel previously so it was like staying at a good friend’s place for five days, who is also a beer brewer and is easily talked into working later into the night! We had rehearsed all the material for a month and were well prepared and professional in the studio and I think I even had 90 % of my lyrics finished going in, so I only had to write an extra verse for two songs while in the studio.

E&D: How has this new album evolved from your last album All Is Lost?

Dana: Each of our albums after Death Ritual moves more in the direction of the way we sound now. A lot has to do with how we have grown as a band, from touring a great deal, and also changes in our personal lives.

E&D: Do you always want the music of YATRA to be ever changing while still retaining the elements of the band’s roots?

Dana: It has just naturally changed. When we started we were living way out in the sticks, and didn’t even have plumbing or internet. We were focusing the same type of energy and themes as now, but into a different speed and structure of songs. My lyrical subjects and vocals have stayed pretty constant throughout all the albums, but the playing style has gone through four years of extensive training and growth, and we also moved house and had a pandemic, as well as some personal losses and trials that have tested us and pushed us in the direction that we have gone.

E&D: What has been the biggest achievement on this album?

Dana: Mostly the reaction of the audience when we play these songs live! In the media we’ve been really stoked! For instance… two of the three singles that have been released, have been chosen for Revolvers ‘6 Best Songs Right Now’ list, and one of those singles has made it into the GimmeMetal Radio top 5 charts.

E&D: What has the feedback for the new album been like so far?

Dana: The support that we’ve gotten from our live shows has been overwhelming at times!

E&D: You’ve done a brilliant video for the album track ‘Terminate By The Sword’. Can you tell us about the video and the track and what inspired both of them?

Dana: We had done a video with Ritual Video previously, for the song Sorcerer from our Blood Of The Night album, and it was great and also won a bunch of film awards. So we knew we wanted to work with him again, sent him the promo listen for the new album and basically just asked him to pick a song and then pitch his idea to us based on a general style that we wanted. The finished product was just his brilliant interpretation of the song, from a classic retro slasher style film, and we love it .

E&D: Was making that video a fun experience?

Dana: It was fun in the sense of letting him run with it and giving him artistic freedom, and then loving the end result!

E&D: This is your first record on your new label Prosthetic Records. How did you come to sign to the label and how are things going?

Dana: Prosthetic has been great for us so far. We work very hard as a band, and we tour a lot, so it should be an awesome combination.

E&D: How did your set at Desertfest NYC go and what were some of the highlights of the festival?

Dana: We crushed it of course, duh… haha! For us it’s always awesome to play in front of a huge crowd! That’s when we are at our best. We had played Desertfest in Antwerp, Belgium previously, when we toured Europe before the pandemic, which was really great, so we had a good idea of what it would be like.

E&D: If you could create your own festival, who would you love to have playing it?

E&D: How have your other recent live shows with Selfgod gone and what have some of the highlights been?

Dana: It was a nice little warm up for the two weeks ahead, with a killer week off in between to fine tune all the things that might need tweaking .

E&D: You are heading out to recommence your US tour as the album is released. What are you most looking forward to as you hit the road again?

Dana: We have some great shows coming up ahead at some of our favourite medium size rooms, and we get to play with lots of different great bands every night on this tour. We really lucked out with the lineups that came through for all the shows ahead. Rather than sitting around waiting and hoping for bigger bands to ask us to go on tour with them, we’ve always just stayed busy with going out on our own if need be. Of course we are hoping for some big support tours, no doubt, and we are very easy to work with and experienced on the road – hint, hint! – but we aren’t gonna just stay home and do nothing if they don’t come through. We are best when we are on tour.

E&D: Will you be playing a lot of Born Into Chaos live?

Dana: We will be ONLY playing Born Into Chaos, in its entirety, going forward, until we record our next album, which I’ve already written a bunch of sick material for.

E&D: You’ve got shows coming up with the likes of Come To Grief, Goatwhore, Incantation, Bewitcher and more. Does it make you feel proud that YATRA can play with so many diversely heavy bands?

Dana: Yeah… always! That’s one of the benefits of touring relentlessly and always moving forward. We’ve got our Ford transit van super dialled in, with custom welded bunk beds and separated gear storage area in the back, and a power inverter and solar power, so we always prefer to sleep in our own ride over hotels and peoples houses, and can save a lot of money that way, which has enabled us to keep touring and moving forward, self sufficiently.

E&D: Who have you loved sharing a stage with in the past?

E&D: What are your touring plans once that initial run ends and will it include a return trip to the UK and Europe?

Dana: We are doing a west coast tour in September with our friends from Seattle, Death Cave, and of course we will be doing shows on the way out there from the east coast and back also. Then hopefully we have a European tour in October, if everything goes according to the plan, fingers crossed.

E&D: How was the experience of being able to play live shows again after the chaos of the last couple of years?

Dana: It was great of course. Too much to put into words to feel that again, after so much uncertainty.

E&D: What have been some of your favourite gigs you’ve played since being able to play live again?

Dana: All of them . The intimate sweaty small venues where it seems the whole room is one big pit are definitely some of our favourites, and nostalgic to our roots and all of us coming up in various bands since we were kids.

E&D: What bands have you seen live recently that have been memorable?

Dana: In the past three months Undeath, Frozen Soul, Sanguisugabogg, Gatecreeper, Vomit Forth, Innoculated, Skullshitter, Vorlust, Bewitcher, Genocide Pact, Obituary, Municipal Waste, Enforced, Mortiferum, Phobophilic, Mortuous, Blood Incantation, we go to as many shows as possible when we aren’t on tour, and we live 2 hours drive from any major cities so it’s definitely a labor of love!

E&D: Are there any bands from your home state of Maryland that you would recommend to check out?

E&D: What would you still like to achieve with YATRA in the future?

Dana: To continue doing what we are doing , into a bigger venue step up across the board, around the world, with all our favourite bands and friends!