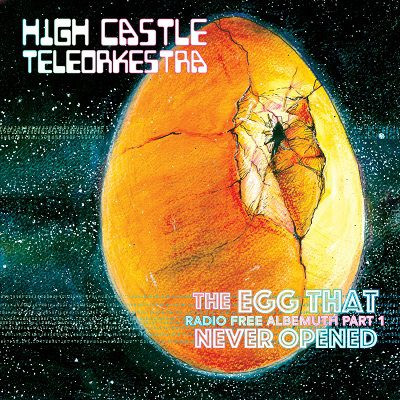 Holy shit in a handbag! What on god’s grey earth is this?! Is it the Diablo Swing Orchestra? The Residents? Oingo Boingo? Klezmer Music? Or is it the return of the Rock in Opposition movement? Well the answer to those questions, not really. But here comes something that’ll knock your socks off this red hot afternoon in the Denver area. It’s an ensemble band called the High Castle Teleorkestra.

This was like a massive cannon blast waiting to happen. Their debut release The Egg That Never Opened: Radio Free Albemuth, Part 1, is a crazy, wacked-out release that’ll give the so-called top 40 radio mainstream bullshit, the giant middle finger it deserves.

Part Fellini-sque, part Coppola, part Fantômas, and part sci-fi flicks from the Italian cinema of the 1960s, the High Castle Teleorkestra bring it all out there to the core. The album is named after the 1976 discarded novel by Philip K. Dick before it was published after his death in 1985. And it will be explored in the ensemble’s music videos in the months and weeks to come.

From the line-up that considers members of; Farmer’s Market, Mr. Bungle, Estradasphere, and Umlaut, the music brings in the odd time changes between jazz, surf metal, avant-prog, and mad scientistry wonders that’ll keep you guessing until the very end. When you hear a title like The Egg That Never Opened, you think of those b-movies you once saw as a kid in the 1950s from Queen of Outer Space, The Thing from Another World, and The Amazing Colossal Man.

Like an imaginative movie brought to life with visual storytelling and hypnotic practical effects, the feels between the ensemble goes into the drenches of Danny Elfman, Nino Rota, death metallic twists, and various behaviour modifications that would have make it the answer to the Ludovico Technique in A Clockwork Orange.

The complexity is all there. For the High Castle Teleorkestra, they have broken all the rules and create this ‘50s utopian world into this terrifying view of hell. And the city that is trying to paint this rosy picture, isn’t what it seems to be.

With mournful techniques of the tango set in the deepest heart of the jungle with intense, brutal Godfather-like themes for ‘At Last He Will’, to the vocal styles of a nod to Miss Lily Banquette of Combustible Edison during the score sessions for the movie Four Rooms with a Lounge-like presence on ‘The Days of Blue Jeans Were Gone’ while ‘Diagnosing Johnny’ goes into a weird approach of 10cc’s ‘Une Nuit a Paris’ with Brian Wilson handling the production levels.

But it’s ‘Klawpels (Mission Checkup)’ that makes it the answer to Santo & Johnny’s ‘Sleep Walk’ that’ll grab your attention as you vision one of those noir books in the ‘40s with a Mundy detective finishing up the case and bringing the criminal to justice. But once it’s over it would haunt him for the rest of his life.

Sly, out of this world, and various different genres going into a blender by creating this hot and spicy drink that’ll blow your head off in the next few days, The Egg That Never Opened constructs more adventures that’ll await us in the High Castle Teleorkestra’s album-like films in the years to come.