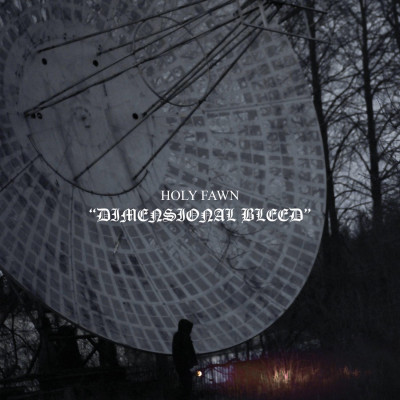 There is a common theory/conspiracy concerning difficult second albums and Holy Fawn made it an even trickier affair considering its majestic debut Death Spells. It was loud, heavy, sad and quiet with emotional pores as deep as volcanic creators. At no point does Dimensional Bleed feel like a repetition of what has come before yet it is characteristically the Holy Fawn brilliance fans enjoy and cements the band’s place as one of the most exciting shoegaze bands around.

Bold statement maybe, but simply turning ‘Death Is A Relief’ as loud as your living conditions allow shows the power of the band. Hazy vocals, lush tones, rich production, quiet/loud transitions, building, release, screamed vocals and a really memorable track. It’s modern shoegaze bingo but Holy Fawn stands well above its peers by creating an atmosphere and sound through texture and layers rather than just fuzzing up chord patterns. With Death Spells this was marked by the guitar led abrasion but Dimensional Bleed tackles from another angle.

Guitarist and vocalist Ryan Osterman built up ideas from samples and electronic elements and that backbone has given the album a new identity to its predecessor. ‘Empty Vials’ is a great example of this as a sample and electronic beat lead the song before the guitars get going and in the seven minutes the band transitions to a wondrous crescendo which slowly explodes with the addition of screamed vocals sitting deeper in the mix.

Within the 10 songs there is a great deal of other ground covered. At its peak ‘Void of Light’ is a blast beat away from being blackgaze, ‘Sightless’ has some of the most aggressive vocals the band has produced with a delicious release of emotion as screams of “Tell me what you see” ring out and ‘True Loss’ is destined to be a first dance at a wedding someday, it’s glorious. There really isn’t a disappointing or repeated moment.

Holy Fawn set the bar high with Death Spells and Dimensional Bleed manages to be something equally great without trying to be comparable to its predecessor. This is unmistakably Holy Fawn but this is by no means Death Spells II. The emotion, the power and the release run through both albums and it is an impressive accomplishment to have created another batch of unique, powerful songs. Holy Fawn are certainly a special band and Dimensional Bleed must surely get them the attention their effort and talent deserves.