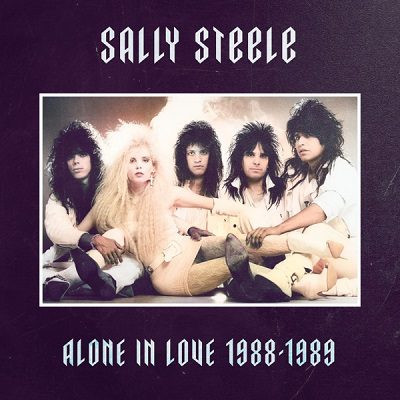 In 2005, filmmakers Jessica Joy Wise, Sam Dunn and Scot McFadyen released their documentary covering the history of hard rock and heavy metal entitled, Metal: A Headbanger’s Journey. Dunn, who had been not only a metalhead when he was 12, but an anthropologist. He set out to visit the world to uncover people’s take on the metal genre. From its origins, culture, controversy, and why people love this music so much. And there was one quote from Slipknot’s Corey Taylor who makes a valuable point about it.

“Metal is probably the last bastion of real rebellion.” And he’s right. It has been with us through the good and bad times during those hefty momentum we go through. It doesn’t go away, it stay with you. But one artist who had taken the genre to a whole other level during the glam metal movement in the ‘80s. Her name is Sally Steele.

Sally as you probably know is the founder, CEO, publisher, and editor-in-chief of Vegas Rocks! Magazine since 2004. But she got her start when she was 14 years old taking photographs from bands such as Black Sabbath, KISS, and Aerosmith. And was an MTV video vixen, appearing with Eric Carmen, Bruce Willis, Loverboy, and Duke Jupiter. Not to mention as a singer when she was 16.

She sang in local rock bands and moved to the land of the rising sun by playing in a cover band. In 1986, she decided to put a band together and performing at the heart of Hollywood’s sunset strip. Working with Paul Sabu (Heart, Glass Tiger, and John Waite), he helped Steele bring her music to life. Recorded from 1988 to 1989, Steele knocks it out in the ball park to see her songs be resurrected in the Deadline Music label this year.

Originally these songs came out on the Retrospect label back in 2005 and now with the 5-track EP, has now got another track to bring her story to life, like an opened book to reveal how she can hammer it down on her voice. The opening title-track gets down to business with heavier riffs, driving towards the heart of Los Angeles, and having the styles of Blackjack’s ‘Love Me Tonight’, Steele and her bandmates channel the unsung group and hypnotising Michael Bolton to get back to his hard rock roots instead of Michael Bolton, the crooner of all crooners.

‘I Never Cry’ has some incredible UFO-like textures from the No Heavy Petting-era in the continuation of where ‘Natural Thing’ had left off as Sally sings in the crossover effect between Ann Wilson and Phil Mogg, driving her motorcycle to see the light of day, learning how to fight back and never backing down before putting those abusers in prison for the rest of their lives.

Both ‘The Only One’ and ‘Sold On You’ showcases a melodic side to Sally’s music. The closing track could’ve been written for Pat Benatar, but adding a bit of Heart’s ‘What About Love’ in the melodic format as the third track showcases with a characterisation over the loss of a loved one.

There’s a beauty, tragic, and sense of detailed evidence of Sally fighting back tears during ‘The Only One’. You can imagine her at the top of the mountain singing her heart out and making the sun rising for a brand new morning with mid-rising guitar lines to make sure she hits those notes right on time for that ray of light bringing in that cool September air.

‘Leave My Heart Alone’ which appeared on The MTV Basement Tapes in 1988, is as spectacular and quite a mind-blowing song. Yes the video is cheesy, but not only that Sally can sing, but the musicians on here are giving her a helping hand by reaching the finish line. The video was made by students at the University of California in the Los Angeles area.

I can imagine they got an “A+” of giving Sally a chance to hit the limelight in the song. And boy, she got it down to a T. ‘Too Bad (It Had To Be You)’ could have been written for Kate Bush during the time she was working on her follow-up to Hounds of Love, entitled; This Woman’s Work.

I think that Sally is tipping her hat to Kate, knowing that her music is a part of her career and giving that sense of being caught cheating with another woman, knowing that Sally is someone you don’t want to mess with when it comes to being picked around. There’s the intensity, fire, and riding towards the skies with a sense of being free from the real world and flying across the world and witness various landscapes that await her.

When the recordings were completed, Steele’s band became regulars from The Whisky, Madame Wong’s West, and Coconut Teaszer on Sunset Blvd, the music then changed by the time the ‘90s hit as Nirvana, Stone Temple Pilots, and Pearl Jam were coming out of making their own classic releases during the grunge movement. For Sally, she decided to hang her guitar up, but she didn’t forget her love of music.

Hunter S. Thompson once said, “The music business is a cruel and shallow money trench, a long plastic hallway where thieves and pimps run free, and good men die like dogs. There’s also a negative side.” It was very hard for Sally to try to get her music heard, but being told she was “too commercial”, it must have hurt her really hard to hear something like that. Now in 2022, the recordings from the late ‘80s are quite a revelation to let listeners know that that Glam Metal is more than just a nine letter word.

And for Sally, she has come a long, long way to bring her music, full circle.