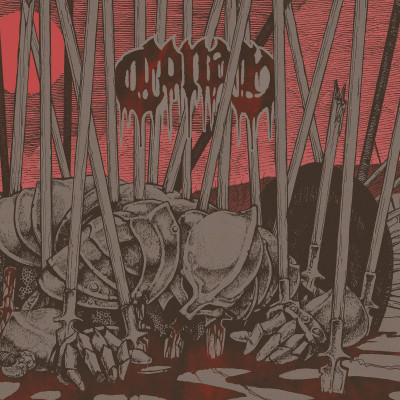 Evidence of Immortality by Conan

One thing about Conan, now in their fifth album, is that they seldom disappoint. It’s a familiar formula, a dense morass of detuned fuzz, and thick bass with Jon Davies’s signature high-pitched vocals weaved with punchy drums. It kind of is what it is, it starts heavy, it’s heavy in the middle and ends, well, heavy. Evidence of Immortality has a feel more like the band’s earlier work rather than the faster, more urgent feel of their 2018 album Existential Void Guardian.

The album opens with ‘A Cleaved Head No Longer Plots’, a monster of a track coming in at over 10 minutes. The first thing that you notice is the high quality of the production, not easy considering the sheer amount of decibels they produce, the cymbals are sharp and punch through the dense layers and the dynamic range is impressive. The dual vocalists join in with their signature pained refrain. The track marches on at a meandering pace with some instrumental breaks, the band has allowed themselves space and time to explore and in the last few minutes, all chaos breaks loose.

A flurry of drum fills opens the next track, ‘Levitation Hoax’, a much faster and chaotic track, the call and response vocals paired with a barnstormer of a riff. About mid-way through suddenly the tracks takes a turn and leave only a guitar, you have this feeling that something exciting is coming and right on cue the band joins back in for a slow crescendo. Jon’s guitar work goes off in a different direction, weaving in and out of the bass and drums. Some bands of this ilk get boring and predictable after many years of doing the same thing but this cannot be said for Conan, they throw in lots of interesting things to keep the listener engaged. Just as we get used to the slow progression of doom, we get slapped in the face with ‘Ritual of Anonymity’ which is short, punchy and almost punky in its feel with a memorable riff. Just to prove that Conan can pull out a proper headbanger when required.

Just as we have had the cobwebs blown out we are back to the pondering heaviness with ‘Equilibrium of Mankind’, another lengthy track. Conan are self described as caveman battle doom but this album makes me think of some kind of unstoppable, destructive geological event. It would make a good soundtrack to some kind of volcanic explosion in Iceland destroying an island. ‘Righteous Alliance’ has a similar vibe, as the album progresses the musical complexity starts to reveal itself, peaking underneath all the noise and doom some post-metal influences creep in. Mastering a very loud, heavily distorted, detuned guitar is a skill and Davies manages it with ease. The band bounce off each other with ease and carry the listener on a journey through the tracks.

Ending the album is what can only be described as an epic, fourteen-and-a-half-minute instrumental. Former band member Dave Perry adding a wonderful, church-type organ which adds some lovely colour and texture and compliments the rest of the band’s heaviness. A bit of a different feel to the rest of the album but is a suitable ending and builds to a noisy crescendo

Conan have proved themselves to be a force to be reckoned with in the doom/sludge scene. Consistent but not dull and they continue to produce albums that are not only familiar but also move the genre forwards and keep things interesting for the listener