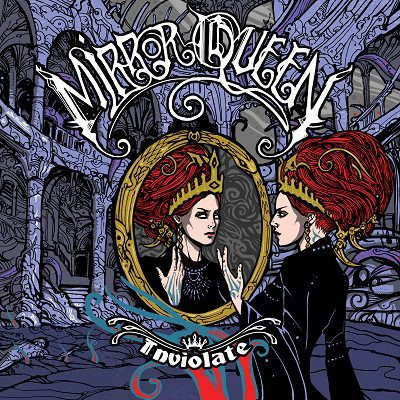 Formed out of the ashes of Kreisor, New York’s own Mirror Queen have taken the steady diet between old school hard rock, and the tales of the two bands who carry the psychedelic torch, Swervedriver and Motorpsycho. Their mission is to combine a different form of magic and take it to the highest bid.

With three albums in the can from the Tee Pee label, they proved that they could knock those doors down so hard, you wouldn’t see daylight again. But on their fourth studio release Inviolate, they went back to the rivers and explored riffs, melodies, and hooks from prog to pop, and creating their own turf with a revved-up engine, ready to head down the highway.

Opening with ‘Inside An Icy Light’, Mirror Queen channel the riffs from Judas Priest with an honoured motorcycling texture that Kenny and McDaniel create an archway for Glenn Tipton and K.K. Downing from the British Steel-era. And what a great way to start album off with a big bang.

The new wave of British heavy metal and sludge-psych genres, makes it a perfect opportunity to share your beer with someone that’s been there with you for many, many years. But we’ve only just begun.

‘Sea of Tranquility’ sets the course with a sight of looking for shore in the middle of the cabin fever-sque intense call-and-response scenario while ‘The Devil Seeks Control’ takes upon a doomy approach on Andy Summers’ Egyptian approach on The Police’s ‘Behind my Camel’ as O’Brien leads the charge for the mob to raise hell and take down corruption with a big bang.

‘Witching Hour’ is an excellent nod for Mirror Queen tipping their hat to San Diego’s own Astra during the time they were working their 2009 debut, The Weirding. You can tell that they were continuing the title-track piece in this mellotronic atmosphere, and seeing the instructions that founder Richard Vaughan had left for them.

Meanwhile, ‘A Rider on the Rain’ returns to the ‘80s thrash metal scene, paying homage to the Kill ‘Em All-era from Metallica with a Black Sabbath twist on their sole self-titled release that makes you want to dig out those swirling Vertigo release during its golden era of the progressive rock scene.

But just as they make the trip home, they make two pit stops on the way back. The subject of losing a loved one hits home very hard with an emotional grasp. You can tell that it becomes too much for the person’s life as they began to tear the room apart by ‘Coming Around with Second Sight’.

And closing it out is the title-track. Here, Mirror Queen have unleashed all of the thumping beats Corallo creates for the doubling textures Kreisor and O’Brien would come up with. It has a marching beat, plus a hint of the grim reaper, waiting for us with an epic slowed down groove to reach someone close to their hearts by driving fast in a new chapter that awaits them in a Mastodon sort of way.

From my perspective, Mirror Queen’s music is not bad at all. While I’m very new to the band’s music, they took me on an adventure towards Inviolate. And it’s worth checking out. But let me go on record that this is a band I might have to check out and see what I was missing, and be on the look-out to see what they’ll come up with in the years to come.