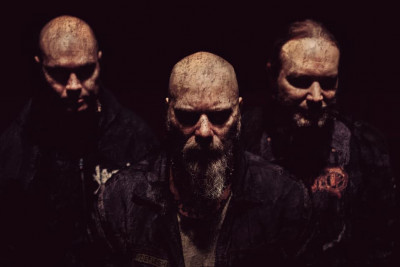 We feel great actually being back and being together. I think we have a more relaxed attitude to it all this time around and are able to enjoy the circus better.

E&D: Defleshed are back with a new album after a 17 year hiatus. What led to the band coming back after all that time?

Gustaf: We were curious to see how we’d sound today and to see if we had more songs within us, so we went to Skogsbergs Sunlight Studios to find out and that resulted in a 7″ which then resulted in an album.

E&D: How does it feel for Defleshed to be back after all that time?

Gustaf: We feel great actually being back and being together. I think we have a more relaxed attitude to it all this time around and are able to enjoy the circus better.

E&D: What have the band members been up to on that time?

Gustaf: Matte has been recording and touring with Raised Fist, Dark Funeral and Firespawn mainly. Lars and Matte did Sportlov together as well. I’ve been doing my own Valley of the Dead as well as Raubtier and Evocation, so we’ve never left the scene entirely.

E&D: Do you feel reenergised as a band?

E&D: Your new album Grind Over Matter is out soon. How did the creation and recording of the album go?

Gustaf: It was intense. We started writing the music in November last year. Around christmas the songs were ready to put lyrics to and the 24th of January we began the recording session. We need that process to be fast and intense, otherwise the process will be impaired by over-thinking. We completed the sessions within three or four weeks.

E&D: What was the vibe like in the studio as you were making the album?

Gustaf: Only good vibes there, man. Lawrence is a good friend of ours and proved to be able to extract the best from us. Sometimes we disagree a bit but it never escalates to conflict. We know where we have each other.

E&D: Have you been happy with the feedback you have had so far for the new music?

Gustaf: It’s a bit early to say. I mean we have got some feedback which has been great but the album isn’t out yet so we will see what the metalheads say. On the other hand, we are happy with the result and if we are, it usually lands well to the guys out there as well.

E&D: How has it been working with Metal Blade on this release?

Gustaf: Really good. It’s great to finally being able to work with a professional label that has good distribution and a strong name.

E&D: How do you feel that Grind Over Matter fits in with the rest of the bands albums?

Gustaf: It’s a new chapter for sure. Although we tried to maintain the balance of staying true to our sound yet throwing in new flavours in the mix. There was never any point in doing Fast Forward 2.0 – we always need to develope within our range of music.

E&D: It’s been thirty years since the Defleshed and Abrah Kadavrah demos. What are your main memories of those early days of the band?

Gustaf: Those days were pretty much about trail and error. We didn’t know nothing about anything basically, so looking back it was much about identity searching I guess. That said, the band had a bigger portion of our focus back then. Today there are so many other things in life to balance while in our teens the main priorities were the band, beer and girls.

E&D: Have you discussed any potential further material from Defleshed?

Gustaf: Not really. One thing at the time. There are some ideas of what to do next musically but it’s far too early to tell. We need to see how this album is doing before we can start mobilizing our next move.

E&D: Defleshed are playing at Braincrusher In Hell in Germany in November. How does it feel to be returning to the stage with the band?

Gustaf: Well it has meant a lot of practising that’s for sure, and it doesn’t come for free that’s for even more sure, but we’re getting there. First out is the show in our hometown on the day of the release. It will be fun, I’m sure of it. I’m just looking forward to the day when we’ve done a couple of shows, because that’s when we can start auto-pilot it a bit and enjoy it more.

E&D: You have a live show at the Black Mass festival in Sweden in December too. Are you looking forward to that one?

Gustaf: Yes absolutely – Gothenburg is a great town to perform for us, that crowd has always been great, and that particular festival has some other great bands I personally want to see like Impaled Nazarene and Nekrocraft.

E&D: You’re heading out on a tour of Japan after that show. You must be excited about that?

Gustaf: Yes, it’s been 21 years since we were in Japan last time. I was there 2014 with Witchery though. Japan is always surrealistic in a good way for a guy that lives in the woods, so we’re leaving that day after Black Mass and will be home a week after. Perfect lenght of a tour for us.

E&D: Will you be played a lot of new material from Grind Over Matter at these shows?

E&D: Have you discussed live dates for Defleshed going into 2023?

Gustaf: Yes we have some booked like Stockholm Extreme Sounds 11th of Feb and the ferry festival Close-Up Båten in the end of March. Festivals for the next summer is starting to be booked as well.

E&D: What have been some of your favourite gigs that Defleshed have ever played?

Gustaf: Hard to say, there has been many great places where we’ve played. The entire tour we did with Cannibal Corpse back in ’99 was great. Also the trip to Japan in 2001. Then the clubs around Germany and Benelux are always awesome.

E&D: What have been some of the highlights of your time with Defleshed in the future?

Gustaf: Of course, Japan will be one of those. Also the first off in Uppsala next week I hope. Then we will see. We hope to be able to go places where we haven’t before. We will see if any of those will happen. We also looking forward to the festival season, hopefully will be able to perform at some of those.