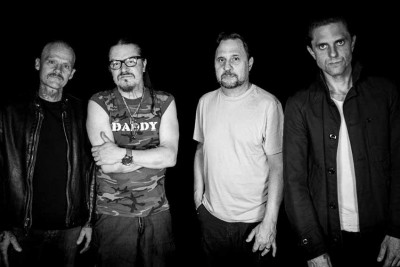 Dead Cross have just brought out their second album II and it sees the band (that consists of vocalist Mike Patton, bassist Justin Pearson, guitarist Michael Crain and drummer Dave Lombardo) building on their debut album with a formidable set of songs that amps up their punk, hardcore and metal influences to the fullest with the impressive results that you would expect from such a group with so much musical talent in their ranks. Gavin Brown caught up with Michael Crain to hear all about Dead Cross and II as well as talking about solo work, favourite guitarists, Black Flag and Slayer.

E&D: It’s been five years since the debut album from Dead Cross. How does it feel to be back with your new album II?

Michael: It’s great. We weren’t sure this record was gonna ever come out.

E&D: You were diagnosed with cancer a few years ago. How are you feeling today and did that horrible experience inspire your work on the album and the making of it?

E&D: Were you going through the treatment and recording music for this album at the same time?

E&D: How was it linking back up and playing with Justin, Mike and Dave again on the album?

Michael: I love those guys, they’re my brothers, you know. It was fantastic, they’re a really easy group of guys to be in a band with.

E&D: How did the recording of the album go?

Michael: It was great. We have Ross Robinson involved again. He’s basically like the fifth member of the band. Like I said, aside from it just being a physically painful and exhausting experience, the actual making of the music and the work involved was great. I mean, being in a studio can always be daunting, and not necessarily the funnest experience. We started to experience that making this record, all records, there’s a level of work involved but in the grand scheme of things, it’s the best work ever.

E&D: How was it working with with Ross again?

Michael: Great. I love working with Ross. He knows how to get a good performance out of you.

E&D: With the album being recorded back in 2019, was it everything that has gone on over the past few years causing the album to come out now?

Michael: Yeah, I mean, COVID obviously set everything back and then that coupled with the preexisting mental related issues that Mike had, COVID definitely brought all that stuff to the surface. In addition to COVID, we waited even longer for Mike to kind of get himself together and collect himself. We finished tracking this record a long time ago so it took some time.

E&D: You must be glad to have the album finally out now?

E&D: Have you been pleased with the reaction to the new music so far?

Michael: I guess good. I haven’t really paid attention to be honest with you!

E&D: You’ve brought out for the videos for the album tracks ‘Christian Missile Crisis’, ‘Heart Reformer’ and ‘Reign Of Error’. Are you happy with the results of the videos?

E&D: Have you had any thoughts or talks about new material at all?

Michael: Yeah, I mean, we’re not even there yet. I’m not even sure we’re gonna play any shows around this album. You know, we’re literally going to take it one day at a time right now.

E&D: Before the album, you recorded a cover of ‘Rise Above’ by Black Flag in support of Black Lives Matter. How was it doing that song and what was the reaction to it?

Michael: I don’t know what the reaction was. I don’t read comments. I don’t pay attention to any of that. I just create and release it, and that’s it, my part is done. Obviously, it was a worthwhile cause but that was fun. Making and recording that song was fun. It was fun to get to do something Dead Cross related.

E&D: You’re obviously a big Black Flag fan, you’ve got the band.s logo tattooed on your neck, as well as a big Slayer logo on your arm. What do Black Flag mean to you as a band?

Michael: To me, they really embody the punk spirit. sonically, and aesthetically. I love Greg Ginns guitar playing and writing. My favourite era is with Rollins. They just sound so fucking good, that’s what’s it boils down to, they’re just badass.

E&D: What other songs would you love to cover in Dead Cross, have you had any thoughts about that?

Michael: I’ve covered so many songs in so many bands and in concert! We covered ‘Symptom Of The Universe’ by Sabbath! Agent Orange ‘Speed Kills’  I love that song. That’s one of my favourite punk songs. In Dead Cross, we covered ‘It’s Adding Up’ by NoMeansNo. We even covered ‘I Want You (She’s So Heavy)’ with the outro from the Beatles. I would like to cover. I would like to cover ‘Top Of The Bill’ from Scorpions.

E&D: Does coming from a punk/hardcore as well as metal background make Dead Cross the perfect musical vehicle for you with all your influences?

Michael: It’s one of the good vehicle. I play a lot of different styles of music and I get to fulfil those areas with other projects all across he areas. Dead Cross is good for one area of focus but I do other projects. For me though, Dead Cross definitely checks a lot of boxes.

E&D: You mentioned Greg Ginn earlier but who are some of the other biggest influences on your guitar playing?

Michael: I like East Bay Ray, Daniel Ash. I really like Duane Denison, some of the Jesus Lizard stuff is incredible.This could go on all day! I like so many people for different things. When I was a kid, it was obviously Eddie Van Halen. All kids were were all obsessed with Eddie! Hendrix of course, the obvious ones. Robert Smith is one of my favourite guitarists. Billy Gibbons. Albert from the Strokes. I really love that guy’s guitar playing. Michael Schenker. Josh Hommes guitar playing, he’s such a good fucking songwriter Rikk Agnew and Jeff Hanneman They’re excellent. That’s a pretty wide range as well.

E&D: What are some of your favourite memories from being in Retox?

E&D: Will Retox ever do anything again in the future?

Michael: No, I doubt it. That band is finished.

E&D: What are your plans for more solo recordings and is thats Kentish you have kept busy with?

Michael: Yeah, I’m always doing stuff on my own. I was in my studio last night, just messing around. I just release stuff as I write, as I’m feeling it. I have another band called Cowards and that album’s coming out soon. I’ve always got a project, or two or three. I also joined the band Fidlar so I’ve been busy with them and we’ll be playing live.

E&D: What do you still want to do musically that you haven’t done?

E&D: What have been some of the highlights in your music career so far?

Michael: Probably the records and the places I’ve gotten to go. The things you would expect, the relationships I’ve made. Getting to play in Moscow and all the crazy locations and getting to meet people in those countries like that is fucking awesome. Where else do you get to do stuff like that? Go and play Mexico City and meet people there, or Moscow or wherever.That’s been fucking pretty cool for me, and getting to play with your idols. How many people can say that they have written and played records with Dave Lombardo? That’s pretty fucking cool.

E&D: What did Dave think of your Slayer tattoo?

Michael: When he first saw it, he laughed. He’s like, nice tattoo and we both laughed. He said, I designed that logo. I was like, shit, that’s so cool.

E&D: Do you talk to to like him about Slayer and with Mike about Faith No More?

Michael: Yeah, they’ve told me all the stories!

Michael: South Of Heaven. Straight up. What’s yours?

E&D: It’s got to be Reign In Blood and then Seasons In The Abyss.

Michael: Yeah, they’re really important. Seasons is when they really hit their stride, wasn’t it? That’s when they found themselves.