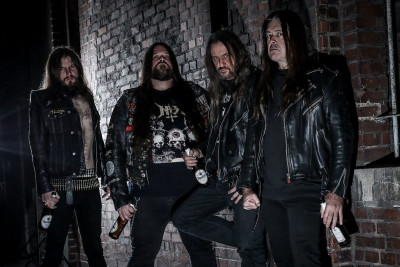 We tried to retain the rawness and brutality of the originals, but of course recorded more precisely. I think the spirit of the old days is still there.

Sodom have been blasting out classic thrash metal for the past four decades and to celebrate this, the band have just released 40 Years At War – The Greatest Hell Of Sodom, which sees the German thrashers re-recording past material to celebrate their metal legacy. Gavin Brown caught up with Sodom founder and vocalist/bassist Tom Angelripper to hear all about the new release, forty years of Sodom and much more.

E&D: Sodom have just brought out your new release 40 Years At War – The Greatest Hell Of Sodom. Are you excited to be getting this one out to your fans and could you tell us a bit about it?

Tom: Of course, It’s a retrospective of the past four decades. Who would have thought that after such a long time we would still be in the scene. Originally we had planned a live album for our anniversary, but it was not possible to do suitable shows due to Corona, so we came up with the idea of choosing a title from each album and then re-recording it. Our record company also liked this idea very much and so we went back to the old material. We recorded all the songs in our rehearsal room. We set up a small studio there in recent years. Our drummer Toni is very familiar with the technology and recorded everything. Toni also produced our last studio album.

E&D: You have re-recorded songs from each of your previous albums, what made you decide to do that?

Tom: It was important to us not only to make the popular titles, but also songs that are supposedly less well known or underrated. However, we tried to retain the rawness and brutality of the originals, but of course recorded more precisely. I think the spirit of the old days is still there.

E&D: Was it a difficult decision about what songs to include on the album?

E&D: How did it feel looking back at your back catalogue and choosing the songs?

Tom: Before that we had to familiarise ourselves with all the old stuff again. It was like time travel, but awesome. So many memories came back to me, but all the effort was worth it and we are currently considering incorporating one or the other song from the album into the live setlist, which will definitely be very exciting.

E&D: Did you want the cover artwork to signify the entire history of Sodom?

Tom: Yes. The executioner and our mascot Knarrenheinz should appear together on the cover. Both had a significant impact on our career. Eliran Kantor has implemented this excellently.

E&D: Can you tell us a bit about the history of Knarrenheinz and how the idea for him came about?

Tom: Back in 1987, when we were looking for a cover for Persecution Mania, our label boss found the picture from an artist friend of ours. That fitted perfectly with our new musical and lyrical direction. From then on he was shown on almost all covers and became our band mascot, so to speak.

E&D: Was there a lot of songs you wish you could have included and would you do a second volume at all?

Tom: No, a second volume is not planned. We just had to limit ourselves to one song per album and couldn’t include the singles and EPs.

E&D: You have also included a separate EP which includes the brand new track ‘1982’. Can you tell us a bit about that?

Tom: The song is reminiscent of the old days. The text is about our beginnings. It was a revolution. We wanted to be hated. We were against our teachers, trainers and uncomprehending parents. At the time, we wanted to show that we were different and not system-compatible. The music itself is written in a typical 80’s style and embodies the spirit of the good old days. The album consists only of songs that we had already written, so to speak as an overview of what we have done in the last 40 years. The new song came later.

E&D: The LP boxset of 40 Years At War – The Greatest Hell Of Sodom features a hardcover book with a whole host of fab accounts. Was it a fun experience getting all that together?

Tom: It was important to me that our fans could also have their say. We then left a few pages blank in the book to print that. Many also sent pictures. Some of the stories were very emotional and personal. That’s when we first noticed how important Sodom is for many fans. However, we could not include all texts because the number of pages in the book is very limited. But we will publish all of them online again.

E&D: Have you ever considered writing your own memoir? I bet there are a lot of stories we’d love to hear!

Tom: Not until now. When I retire, I’ll have time for that. But I’m not thinking about that yet.

E&D: Aside from starting Sodom, what are your other main memories of the year 1982?

Tom: I was still training at the coalmine and still living at home with my parents and sisters. That wasn’t always easy. I wanted to move out as soon as possible, but was then drafted into the Bundeswehr.

E&D: What are your favourite albums and movies that were released in 1982?

Tom: I never saw a lot of films because I almost only listened to music. But my favorite records are Motörhead Iron Fist and Venom Black Metal. In 1982, however, countless great records came onto the market. There was really a sense of optimism. Definitely a good vintage.

E&D: When you first started Sodom, did you think you would still be going from strength to strength four decades on?

Tom: That wasn’t our ambition at the time. We just wanted to have fun without any professionalism. I never thought it would go this long.

E&D: Do you have fond memories of making your first release, the In The Sign Of Evil EP?

Tom: Of course we were very proud to hold our first record in our hands. Otherwise the memories of it are very faded because we were drunk all the time.

E&D: What memories stand out from making your Obsessed By Cruelty debut album?

Tom: It’s probably the only album in the world that has been completely re-recorded twice, but that’s another and longer story!

E&D: Agent Orange album has to be my favourite Sodom album. Do you have a favourite out of all your albums?

Tom: My favourite album is Get What You Deserve.

E&D: Do you still get as excited making new albums with Sodom?

Tom: Oh yeah. That is a lot of fun. We still write the songs together in the rehearsal room. That’s where the best songs come from.

E&D: Have you had any thoughts about a brand new Sodom album and when we could expect that?

Tom: We already have 4 songs ready, but I can’t say when that will be published. We have to decide that together with our label.

E&D: Who have been some of the biggest influences on the music of Sodom over the years?

Tom: There are no direct influences in our music because we have developed our own genre, but back then it was the first Venom album that inspired us to make music ourselves.

Tom: We have booked a few festivals so far and plan to visit the US again. We also have to wait and see how the Corona situation develops again. We need planning security and unfortunately that is still not possible.

E&D: Sodom are part of the Teutonic Big 4 with Destruction, Kreator and Tankard. Would you still consider doing a tour with all four bands?

Tom: It would be great and a really big event for all the Teutonic thrash fans in the world, but you have to know, this is a hard business and all the involved companies, like labels, publishers and booking agencies follow their own interest. It’s hard to get ‘em united, but we will see.

E&D: What are some of your favourite ever thrash metal albums?

Tom: I don’t know how to define thrash metal but I love these 3 discs. Venom – Welcome To Hell, Slayer – Hell Awaits and Metallica – Kill Em All.

E&D: What have been some of the most memorable gigs that Sodom have ever played?

Tom: That was in 1991 in Sofia/Bulgaria. Back then we were the first band to be allowed to perform behind the Iron Curtain. There were over 20,000 people there at the time. That was something very special.

E&D: What do you still want to achieve with Sodom in the future?

Tom: As long as I stay healthy and creative, I’ll keep it going. A new album is in the works and we’ve already booked a lot of gigs for next year.