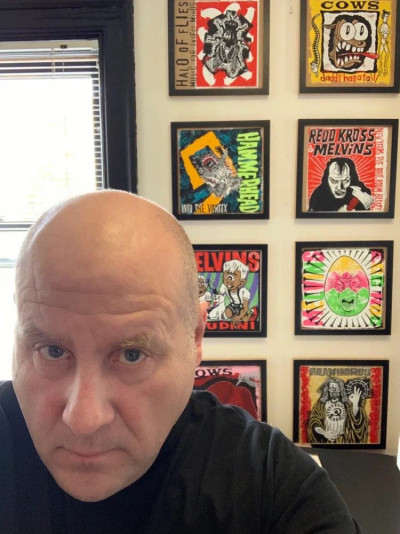 One of the things I’ve really enjoyed about this incarnation of AmRep is the lack of long term planning, and the level of spontaneity we’re operating at.

Since it’s inception in the mid 1980s Amphetamine Reptile Records has been instrumental in putting out so many important albums from the likes of Helmet, Surgery, Cows, Boss Hog and Unsane to name a few and the labels back catalogue is nothing short of immense. The label is still going strong today and has just brought out the brilliant new Melvins album Bad Mood Rising and continues to bring you the best in independent, alternative rock and beyond. Gavin Brown had the pleasure of talking to AmRep founder Tom Hazelmyer to discuss the past, present and future of one of the greatest independent rock labels of all time.

E&D: Amphetamine Reptile have just released the new Melvins album Bad Mood Rising. How was it bringing their new album out on the label, having worked with them so much over the years?

Tom: It’s exciting to see some of yer oldest friends breaking the physics of rock and making fresh relevant music forty years later. Sure some bands are around or active forty years later (very few) but STILL making new music that holds a candle to their early years? There’s the Melvins and damn near no one else.

E&D: Does it make you happy to see bands like the Melvins and Unsane still releasing albums and touring?

Tom: Yes, very much so. In the case of the Melvins, it’s awesome to see a huge mix of ages in the crowd leaning to a lot of younger folks there. It’s not a nostalgia show where a bunch of sixty year olds are coming out that one night a year, hoping for a taste of their youth like I’ve seen happen at some recent HC bands from the 80’s reunion tours. I’ve no interest in past glory, I want new glory!

E&D: What have you got coming up over the next few months?

Tom: Despite the recent delays at the pressing plants making projects take up to 11 months to complete, one of the things I’ve really enjoyed about this incarnation of AmRep is the lack of long term planning, and the level of spontaneity we’re operating at. The speed that AmRep and the Melvins have been able to come up with an idea, execute it well, and then rapidly move onto the next idea is exhilarating. Running the label as a well oiled business model like it was at its peak in the 90’s holds no interest for me. This is far more creation than commerce this time around. No meetings about promotions or production, no long phone calls with distribution, just make it and move on.  At this moment I’m really excited to finish the Mr. Phylzzz LP I’ve been waiting FOREVER for!

E&D: How does it feel still releasing brilliant records over thirty years since the label began?

Tom: At this point in life I accept that I’ve altered my DNA and it’s just part of me. I tried to quit making records and run bars, or do other things  as my day job, but I keep getting dragged back. Well it’s mostly Buzz that dragged me back, it’s his fault. Blame him!!

E&D: Did you think that the label would be around as it has?

Tom: No. Very few folks have the foresight in their youth to plot and plan long term. I certainly didn’t. Hell, I never set out to have a label, I just wanted my band to have records out. Then I realized I wanted people to know the records were out, so I started working the fanzines over so folks would hear about and want to hear my band, then I realized I would need to distribute these records to stores everywhere so folks could hear my band and before I knew I WAS as much a ‘label’ as I was in a band, and quickly was doing it for my friends bands as much as my own.

E&D: What do you credit to its longevity?

Tom: Persistence and stubbornness. The assholes that are waiting for me to fail are always a big motivator! Also not getting distracted by all that shit surrounding the music business, and never forgetting what got me to where I am, I make records.

E&D: What advice would you give for someone starting up their own record label?

Tom: I generally don’t give that kind of broad advice as I’ve learned a couple of things in life and about this business in particular. There is no one right way to it. There’s THOUSANDS of right ways, and millions of ways to fuck it up. I’ve honestly learned more from watching those that fuck up than learning from the successful labels. The land scape has changed so drastically the last 20 years that I certainly realize I don’t know shit!

E&D: What records are you the proudest of releasing and which bands do you feel sums up the Am Rep ethos the most?

Tom: Proudest of? Impossible to pick. There’s different records that come to mind for so many different reasons. Helmet for changing the music landscape massively and us desperately trying to keep up with their meteoric rise, or hearing that greasy assed first Boss Hog EP THEN seeing the masterpiece cover, hearing/seeing those mutants in Love 666 and having their AmRep debut come together, seriously there’s hundreds of proudest moments. I don’t think there was ever as strong an “ethos” inside the machine as there was perceived from outside it. Gun to head pick one band that was the heart and soul back then, Cows. Today, Melvins obviously.

E&D: What’s the biggest compliment you’ve ever had about the label?

Tom: I would say giving Ian MacKaye a tour of our HQ/Studios in the 90’s and him being impressed. He was certainly one of the folks operating a label I was motivated and influenced by.

E&D: How did it feel to have yourself and AmRep the subject of the documentary The Color Of Noise and did you have a lot of involvement with the project?

Tom: It was a strange experience. I was involved solely as subject, well I did help Eric Robel (director/producer) out after the film was complete as best I could in promotions and stuff, but the whole thing top to bottom was his Frankenstein’s monster.

E&D: Have you ever considered writing your own memoir about your life and the label?

Tom: No. I have no interest in that. I don’t crave attention nearly enough for that kind of nonsense. Also I have a strong anti intellectual streak that blocks me from that much self introspection, and lack the memory to recall important names and dates – haha!

E&D: Would you ever do any volume of the Dope, Guns & Fucking In The Streets compilation?

Tom: Certainly. In recent years I’ve done a couple new ones, just enough to remind me that doing that series was like herding cats and a massive labor of love! The results have stood the test of time as it’s become a benchmark of what a compilation could be, but man the labor! Also the need for compilations is certainly diminished in this YouTube/Bandcamp world where you can check out a new band in mere seconds. Back in ‘ye olden tymes’ compilations we’re an affordable way of informing people about  bands they weren’t familiar with.

E&D: Are there any bands you could have signed that you wished you had?

Tom: I’ve been asked this a lot, and no there really isn’t. No I didn’t have a chance to sign Nirvana!

E&D: What have been the biggest highlights of running AmRep over the years?

Tom: I don’t really keep that kinda stuff at my fingertips. It was kind of the entirety and continuum of it all. That’s more how I quantify that kind of thing in my mind.

E&D: Is making art and artwork still as important to you today as it always have been?

Tom: Yes. Making music myself has slid out of my wheelhouse as a regular activity and making physical art (not computer design, I distinguish between the two) has filled that slot/slog in my life.

E&D: What are your favourite ever AmRep album covers?

Tom: The most recent I’ve made, almost always.

E&D: What have been some of the highlights of your BASH live events?

Tom: The entirety of organising, and putting on the event collectively is the highlight. It’s the sum of the parts that’s the highlight. That’s just how my mind works. I don’t think about the step by step of the process, but the whole race.

E&D: Which AmRep bands do you love to see playing live the most?

Tom: I’m not nearly as involved in seeing live music as I once was. I doubt I’ll ever enjoy a live show as much as I did standing in CBGB’s with a whisky and cigarette in hand seeing a young Helmet, Surgey or Tar. There’s a reason the average age of the crowd at a music bar isn’t 60! In the past, at its peak, watching all the bands top each other continually was one of the greatest joys in life for sure.

E&D: Do you find it a challenge running the label and your bar Grumpys?

Tom: No, I’ve always been somewhat reasonable at taking on what I can efficiently handle properly and not letting anything become too neglected, and hopefully get the job done reasonable well. That said I’ve reduced my workload in recent years.

E&D: What were some of your happiest times with Halo Of Flies?

Tom: Making records, which is likely why I chose running a label over being in a band.

E&D: Has there ever been any discussion of new material with H-O-F?

Tom: None. I have little interest in it. One member is no longer on speaking terms with me, and despite having done some new material with the other member in ‘06-‘08 it’s just a dead issue. No one else cares, and I care even less.

E&D: How did you discover punk rock in the first place?

Tom: As a pre-teen in the 70’s I was drawn to musical extremes, right about then there were trickles of this utterly insane music movement coming out of the UK. By trickle I mean it was a damn near black out of info on these bands like The Clash, Sex Pistols, Damned, Stranglers etc. in the mainstream media of that age.  I was drawn to it like a moth to flames on the brief glimpses caught. It was so incredibly alien and nothing like the life in the Midwest of that time. Luckily I found my first taste in a cut out bin of a Musicland record store in a Grand Rapids MI mall in 1978, NEVER MIND THE BOLLOCKS! It was gas on the fire I was obsessed from that moment on.

E&D: What albums have had the biggest effect on you as a person?

Tom: Far too many to mention! Such an impossible question over all!