(((O))) Review: The Aaron Clift Experiment – The Age of Misinformation 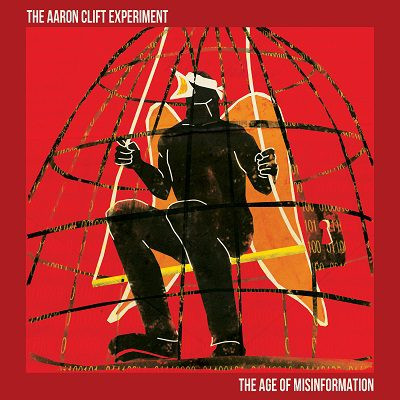 The Age of Misinformation by The Aaron Clift Experiment

For nearly eleven years, Austin’s own Aaron Clift Experiment have challenged listeners to combine progressive, classical, modern, and alternative rock into a giant crystal ball by inviting listeners to be a part of their journey. Because it’s going to be a ride that’ll stay with you, for the rest of time.

Their latest release The Age of Misinformation, a follow-up to 2018’s If All Goes Wrong, is proven to be their darkest releases for the New Year in 2023. Here, Aaron details the chaos and nightmarish terrors during those two-year status when the world shut down due to COVID-19 as concerts, music festivals, and going to the movie theaters suddenly stopped.

But once the riots, protests, and corruption occurs during those hectic times, it becomes hell on earth. And the concept adds more fuel to the fire, but tends a light at the end of the tunnel. From the moment the opening title-track begins, you get a sense of being a witness of those riots occurring in the middle of a war zone between the left and right embarking in this big, massive fight as they go at each other’s throat.

The tidal-waving effects between Basini and Pablo Ranlett-López bring in these dramatic turn of events by never turning back, because it gets even more dangerous with the militant themes they bring in. ‘L.I.A.R.’ has these Rush-like atmospheres from ‘The Camera Eye’ on Moving Pictures, to the title-track of the ‘90s-era on Roll The Bones.

The song gives us unanswered questions on why the fighting is still going on, without anyone waving the white flag for surrender. ‘Bet On Zero’ is the band’s response to the Italian prog-rock scene. The horn section on this track, gives some leeway to a soulful cry to the complicated and one of the true singers from the genres of jazz and soul, Nina Simone.

You can just close your eyes and imagine her teaming up with the maestros Syndone’s La Bella E’ La Bestia (The Beauty is the Beast), and King Crimson’s In the Wake of Poseidon period as she rules both bands with an iron fist. You can feel the chemistry, unexpected time changes, wah-wah bass grooves, dystopian sections of a hallucinated lullaby, blaring Mel Collins-like improvisations from Big Wy’s Brass Band, and extending the ‘Lizard’ suite with some arpeggiated roller-coaster blues-like shred from Basini who channels Gary Green’s textures from the 10-minute epic.

But it’s Pablo who takes centre stage as he plays like a mad scientist while Aaron gives him carte blanche along with Warren in the lead by taking us into a dangerous alleyway that is filled with terror and swinging climaxes. ‘Dark Secrets’ is a hardened reflection of looking at the corrupted politicians who wear a happy-go-lucky mask, but has an amount of skeletons in the closet, they don’t want the media to know about.

Detailing elements of greed, and the people they hurt and throw under the bus, it shows how much damage not only they’ve done to them, but becoming their own worst enemy. Then, everything starts to rise out of the ashes as the fifth track has transformed into a Morse Code texture that Aaron does on his keyboard by sending signals to his fellow comrades before he takes the challenge by climbing Mount Everest in an operatic form.

There are some incredible licks that Basini does in the last section of ‘Rise’ where he combines the arrangements of Steely Dan’s Jeff ‘Skunk’ Baxter, The Allman Brothers Band’s Dickey Betts, and Iron Maiden’s Dave Murray into one giant smoothie before he breaks out his acoustic guitar as he takes a walk across the Brazilian beaches to watch the sunset over the horizon in this classical-jazz approach in an underwater city in its art deco design for ‘The Color of Flight’.

When they go for the ‘80s arena rock twist on ‘Málaga’, it’s almost as if The Aaron Clift Experiment have tip their hats of the two givens; TOTO and The Alan Parsons Project with a mid-fast pace. You can tell that Aaron has a lot of admiration between those two bands with violins leading in the race by opening up all the doors to various parallel universes that are waiting for us.

‘Weight of the World’ closes the album with a sense of relief and hope for peace around the globe. But at what cost? It’s the sombering aftermath of the characterisations life of the two-year situation they had to go through during those tricky times. And they’ll never be the same after the ordeal.

While they reached $2,620 USD with 76 backers at 52% of $5,000 for their original flexible goal on their IndieGoGo campaign, The Age of Misinformation is The Aaron Clift Experiment’s gratification, and the album that we need, now and forever. Detailing the good and the bad during the chaos of fear from 2020 to 2021, Aaron always comes back swinging. And this time he’s lit the fuse and spreads it like wildfire as high as it can go.