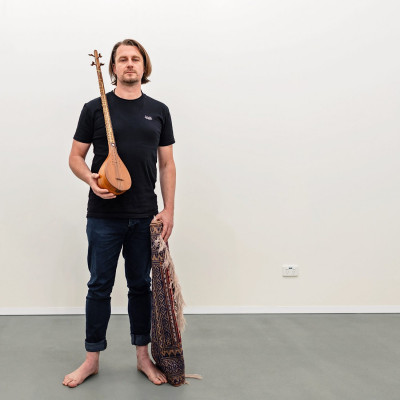 The Sydney based Art As Catharsis label is 10 years old. In that time the label has released records from not only Australian based experimental artists, but also artists from the US, UK, and many other places in between. But not just experimental music – there’s noise, chamber-classical, screamo, psych-rock, pop, jazz-fusion, folk – anything really where a musical form can be forged into something new by genre-bending musicians unafraid to explore sonic potential and possibility. The label is also as much influenced by international music of world-wide cultures and ethnicities as it is informed by Western music. It’s a label seemingly with no boundaries (artistically, culturally, or geographically) and plenty of music to get stuck into to purge body and soul and shake off the boring tropes of the mainstream – catharsis by name and catharsis by nature. What started off as a labour of love for label owner and runner Lachlan Dale is now a growing international concern – he’s even found time to release his own music. We’ve championed the label from the start at Echoes and Dust, so this feature is our opportunity to celebrate 10 years of aural disturbance and sublime sound.

E&D: What spurred you on to creating your own label?

Lachlan Dale: I can remember attending shows in my late teens and early twenties and being completely blown away by the creativity and quality of Australia’s underground scene. I couldn’t understand why bands like Five Star Prison Cell, Tangled Thoughts Of Leaving, Squat Club, and Pirate might only have a few dozen people at their shows, but tens of thousands of people would attend music festivals to see an endless parade of generic rock and metal bands.

I was completely electrified. As a budding musician, I drew so much inspiration from the artists around me. And so I decided to use the skills I had in the digital space to try and help these bands get the attention they deserve.

E&D: How has the label met your expectations?

LD: The label has always been an extension of my love and passion for music. I am content just by its mere existence. But when I look back on the last ten years, I think of the hundreds of friends I’ve met through the label, the sense of community we’ve helped build, and the incredible releases which have been put out into the world, I am grateful beyond words.

E&D: Which was the one thing that made you think “Hang on a minute, we’ve got something here…”?

LD: Honestly, I’ve never really needed external validation for what we’re doing. I’m driven by an inner impulse rather than a desire for commercial success. But our first official release, Serious Beak’s Huxwhukwx, was more successful than I could have dreamed. We got publicity from all over the world, and it really felt like what we were doing was important.

Locally I started putting together weird mixed bills that would feature a progressive metal artist, then a folk singer, then a psych band, then a post-rock band – and people loved it. From there things started to pick up momentum.

E&D: How have your musical tastes broadened in the last 10 years?

LD: I don’t know whether to compare myself to an addict or not. As a musician myself, I need new sounds and inspiration to help me create music. The last ten years has seen me move through extreme metal, doom and drone, post-rock, neo-soul, cathartic folk, psych, experimental rap, jazz, ambient music – and in more recent years – classical music from countries like India, Iran, Afghanistan and the Arab world.<

These days ambient music and Eastern classical music make up a lot of my listening. While I have an Eastern record label, Worlds Within Worlds, I’ve been fighting off the urge to start an ambient / drone label. We’ll see how long that lasts.

E&D: What kind of impact has Art As Catharsis had on alternative music in Australia?

LD: I don’t think that’s really my place to say. I’ve had a few friends who I count among my favourite musicians in the world say that my support, encouragement and harassment has helped them follow through on releases they were struggling with, which is a beautiful thing. That means a lot to me.

E&D: What are the biggest challenges facing the label today?

LD: I’ve begun to realise how much I rely on both my insane pace and volume of work, not only for the record label but for my day job. At 36, I’m also starting to realise that this may not be sustainable for another decade. I’m only now starting to understand the strain that this puts on my mind and body. I’m conscious that I need to find a more sustainable pace, and perhaps reduce the number of things in my life. For my labels that means avoiding putting out 20+ releases a year, and being more selective.

E&D: What are your plans for the next 10 years?

LD: I’m hoping to wind down the commitments of my day job by freelancing, and spend more time on my own art and music, literature and philosophy, and my labels.

This year I’ve managed my first couple of tours for international artists in Australia: Afghan-American rubab player Qais Essar, and Spanish oud and rubab player Michel Gasco. They have both been rather successful, so I’d like to build on those wins. I’d love to be getting some of my artists playing at the Sydney Opera House, Dark Mofo, Vivid Festival and so on.

You might know that the Taliban in Afghanistan have banned music once more, and I’ve heard cases of musicians being persecuted, or having to leave the country to avoid destitution and starvation. This year I crowdfunded a project to record an album of Afghan musicians-in-exile in Mashhad, Iran. This was made possible thanks to my ongoing collaboration with Michel Gasco. I’d love to continue doing projects of this sort, and to have people or institutions help fund this important work.

E&D: If you had to choose one record from the label to listen to on repeat, which would it be?

LD: That’s an easy one! I just put together a compilation called Decade Of Progression: 10 Years Of Art As Catharsis, which features some of my favourite tracks from the last ten years. If I had to choose a single release it might have to be Brian Campeau’s Don’t overthink it, overthink, overthinking. It’s a brilliant album – somber, progressive, minimalist, and all driven by Brian’s angelic voice. Truthfully, I don’t have the stamina these days to listen to heavy music endlessly. HELU’s Varisema and Joseph Rabjohn’s side of Eclipsing // Orbs are close contenders, too.

Echoes and Dust writers also have had some favourite Art As Catharsis releases over the past 10 years – check out some of these – or better yet, drop by the label’s Bandcamp page.

“Ankaa is nothing less than a stunning record. It’s a masterpiece: a symphonic concept album that demands its movements be played in sequence, and in one sitting, and which rewards you handsomely for doing so.” – By Charlie Gardner

“Riffs and saxes – but what riffs and saxes they are – on an album that should be as essential to you as air and water.” – By Stuart Benjamin

We Lost The Sea – Departure Songs

“This album is dripping with sadness, loss, and glorious failure. It’s an amazing release, and I’m actually a little scared to review it. I hope I do it justice. Perhaps it’s best if you imagine this review as the enthusiastic stranger at a bar after 5 pints finding out that you like the same music, and excitedly yelling at you for 20 minutes.” – By Nick Dodds

Instrumental (adj.) – A Series Of Disagreements

“The production values are excellent, really allowing the music to shine. Repeated listening only serves to reinforce the brilliance of the arrangements and structures that this trio have created. I can’t wait for a full-length record.” – By Stuart Benjamin

“Music soldiers, if you are looking for an album to blow your mind I’ve something for you. It comes from Sydney, Australia, and it’s called SEIMS…SEIMS is a collection of 14 gems for a journey lasting just over forty minutes, but you are going to lose your time perception.” – By Daniela Patrizi