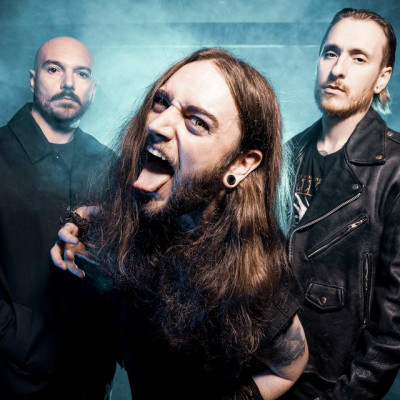 UK death metal giants Ingested have gone through some changes in recent times, in terms of the bands lineup, but the fact remains that the band’s music sounds even bigger and more brutal. This is set in stone on the brilliant new Ingested album Ashes Lie Still, their first on Metal Blade, which signals a new start for the band and will see them take their music to a higher level. Gavin Brown caught up with Ingested vocalist Jason Evans to hear all about the changes that the death metallers have gone through until the arrival of Ashes Lie Still as well as their recent tour escapades, what the future plans are for Ingested and more.

E&D: Your new album Ashes Lie Still is out now. You must be excited to have the album out there for people to delve into?

Jason: Absolutely, this is our Metal Blade Records debut which is super exciting, and we’ve put our hearts and souls into this album. It was a very emotional experience putting it together so to see our fans around the world enjoying it is a truly awesome feeling.

E&D: This is your first album as a three piece. How is that working out with you and your music?

Jason: It’s always shit to lose a band member but to be honest, this is the best we’ve ever been. Sean, Lyn and myself are all on the same page musically and with our vision for where we want to go and what we want Ingested to be. We are stronger than ever before, we’re finally making waves and getting the recognition we feel we’ve deserved for a long time.

E&D: What other metal three pieces are you fans of?

Jason: Dying Fetus first and foremost. We’ve been huge fans of Dying Fetus since before we even started this band and they’ve always been one of our biggest influences. Other than that, Immortal, Krisiun, Motörhead come to mind. All great power trios.

E&D: How did the process of recording the album go?

Jason: It was a tricky one to be honest. But it was always going to be, recording an album during a pandemic. Sean recorded guitars at home and Lyn did the drums where he lives in Mallorca. I then travelled over to Mallorca myself to track vocals, but after one day I fell seriously ill and was rushed to hospital, so that put an end to that. I took two weeks to recover, then I began tracking vocals with our engineer Nico controlling everything via the internet. I actually quite enjoyed recording at home as it was very laid back and relaxed, and I didn’t feel the usual pressures of time constraints, but yeah it was a weird one.

E&D: The album track ‘From Hollow Words’ features vocalist Sven De Caluwe from Aborted. How was it working with him on the track and what does he bring to it?

Jason: Oh, working with Sven was a dream! His vocals are so unique and recognisable. We’ve know him for a long time and always wanted to get him on a song and ‘From Holly Words’ just felt like the perfect one. It’s a very pacy song and I think the back and forth, call and response vocal delivery between Sven and myself really elevates the brutality.

E&D: What do you think of the state of the extreme metal scene in the UK at the moment?

Jason: Personally, I think it’s a circle jerk. I think if you’re not in this club of back slapping and arselicking you get completely ignored. Look at the metal magazines, websites and festivals in the UK and look which UK bands it is that’s always featured, it’s always the same ones. It’s boring and it pisses me off. The industry in the UK needs to start realising that they are not the important ones, the bands, artists and fans are. They’ve ignored us for 16 years, whilst we’ve been out here flying the flag for UK extreme metal more than any other motherfuckers. So they can kiss my arse, the fans know what the real deal is.

E&D: What newer British metal bands are you loving at the moment?

Jason: Bleed From Within and Malevolence are our boys, we love those guys. Sylosis are fantastic too. Bound In Fear, Monasteries, Existentialist, Cast In Tephra, Osiah, Steel Mage, there’s tons of British bands that don’t get enough coverage or support.

E&D: What are your all time favourite death metal albums and what is it about them makes them special?

Jason: My favourite death metal album of all time is probably Ruination by Job For Cowboy, to me that is a perfect death metal album, it’s got it all. Bloodthirst by Cannibal Corpse, Nocturnal by The Black Dahlia Murder, Stop At Nothing by Dying Fetus, Despise The Sun by Suffocation, I mean I could go on all day, haha!

E&D: With all the brutality in your lyrics and music, they would be perfect to form the basis for a horror film. What are your favourite horror films to watch?

Jason: My personal favourite horror movie is the original Texas Chainsaw Massacre. I think there’s just this atmosphere of uneasiness straight away and it just continues all the way throughout. I think they were really clever about the violence and gore in it too, nearly all of it is implied, you don’t necessarily see any actual gore, but the way they shot it it makes you think you did. I also like Hellraiser, and I love The Devil’s Rejects.

E&D: What are the goriest films you have ever seen?

Jason: The Terrifyer movies are quite gory, The Sadness is definitely up there too. A Serbian Film is quite shocking and of course Cannibal Holocaust.

E&D: You recently did a tour in the US with Lorna Shore, Aborted, Ov Sulfur and AngelMaker. How I’m did the tour go and what were some of the highlights?

Jason: The tour was absolutely fantastic, every show was sold out, the fans went absolutely crazy every night and all the bands killed it! I mean, look at the line up, it was stacked from top to bottom. It was one of my favourite tours we’ve ever done, and Lorna Shore were wonderful headliners, I’ve got a lot of love and respect for those guys, they’ve been through similar shit to us, they’ve been around for ages, were ignored, but they worked their fucking arses off until they couldn’t be denied any longer. Huge respect to them, what they’ve done and what they’re going to do.

E&D: Were you fans of everyone that you toured with?

Jason: Yeah absolutely! We love all the bands on the tour, we’ve known a lot of them for a long time, so this tour was a bit of a friends fest!

E&D: Have you been playing much new material in your sets?

Jason: Yeah, the newer songs we played on the tour were ‘Rebirth’, ‘Shadows In Time’, ‘Tides Of Glass’ and ‘Ashes Lie Still’. They all went down like a storm and everyone went nuts so that felt great!

E&D: You’ve also played some Xmas gigs in London and Manchester in December. Were you looking forward to them?

Jason: Yes for sure! This was our first crack at a home show, we’re very excited to end the year in our hometown, and who knows, maybe we’ll make it an annual thing!

Jason: We’ve had an insanely busy year in 2022, but that’s the same as every year to be honest, we never stop working! So we’re gonna take January and February off and spend some well earned time at home with our families. Then in March were hitting Europe and the UK with Cannibal Corpse and Dark Funeral, which is very exciting. In May we shall be returning to the USA, we absolutely love touring the States, the fans there always treated us well, however the scandalous merch cuts from the venues can suck my dick. After that we’ve finally been given a chance to play Download festival, after 16 years as a band. So we’ll have to show them exactly what they’ve been ignoring for so long. We’ve actually got a shedload of other plans for the year, but you’ll have to wait for those!

E&D: How does it feel to be back touring after the events the world has faced over the past few years?

Jason: Honestly it feels great. Touring is our lifeblood, so to have that taken away from us was a very heavy blow. But hey, we’re back, so is everyone else, so now it’s time to get out there and do some damage.

E&D: What have been some of the most memorable tours that Ingested have ever done?

Jason: Definitely this Lorna Shore tour we just completed, that was insane, to play to thousands of people every night and have kids come up saying that it’s their first ever show and making so many new fans was unbelievable. We did the Fit For An Autopsy USA/UK and Europe tours and they were a blast! Touring with Dying Fetus and Suffocation in Europe was some bucket list shit, doing Summer Slaughter with Cannibal Corpse and Nile in 2016 was epic, and of course our first proper European tour in 2010 with The Black Dahlia Murder and Carnifex was a memory that I will never forget.

E&D: What are some of the craziest tour stories that you can share with us?

Jason: Having the WWE wrestlers Erick Rowan and Dolph Ziggler turn up to our show in Vienna was pretty wild. Having two cop cars pull up on us at a gas station somewhere in America because me and Sean had a drunken scuffle years ago was nuts. Me getting trapped in a barn in Switzerland and having to do a cry shit into a paint bucket is definitely up there. There’s been tons of mad shit, I’ve forgotten most of it over the years, to be honest that’s probably for the best!

E&D: What have been some of the highlights of your time with Ingested thus far?

Jason: Just being able to create music that I want to hear, that feeling of pride and joy when you see fans screaming your lyrics back to you from the crowd. This is all I’ve ever wanted to do and our fans allow me to do it. I can never thank them enough.

E&D: What did you still want to achieve with Ingested in the future?

Jason: Our mission has always been the same from day one. This isn’t about money, this isn’t about fame, or being the biggest band. This is about being the BEST fucking death metal band on the planet.

E&D: What is the best thing you have ever ingested?

E&D: What is the worst thing you have ever ingested?

Jason: I ate an earthworm once when I was a kid, trying to impress/gross out my friends, that was pretty terrible. Other than that I hate mushrooms. Not the magic ones though, they’re alright. Still taste like shit though.