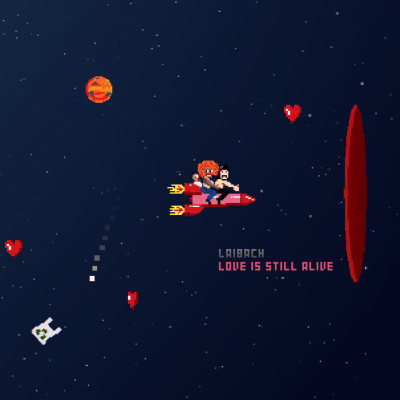 Love Is Still Alive by Laibach,

As another year stumbles to its feet in darkness Laibach bring us a sweet and deceptively upbeat country song about fleeing the burning earth with a message of hope in their hearts. All is not yet lost as long as Love Is Still Alive.

Riding into their fifth decade, Laibach continue to confound and surprise. Now they’re space cowboys searching the galaxy for a new home. ‘Love Is Still Alive I (Moon, Euphoria)’ sounds like Nancy & Lee filtered through old sci-fi. The occasional decorative flourish of pedal steel only underlining that its usual melodic role has been taken by theremin like electronics for maximum B-movie vibes. Appropriately enough, as this EP has its origins in their soundtrack for preposterous space-Nazis conspiracy action caper Iron Sky : The Coming Race.

Released in 2019 and, despite featuring Hitler riding an angry T-Rex, by all accounts shockingly bad, it bankrupted its production company and a third film in the series has been shelved. Laibach intend to belatedly release their soundtrack later this year and are just setting out on the second leg of their The Coming Race tour.

The incredible arcade game video landed late last year. Bright, playful, and dense with imagery, it was swiftly followed by their version of Leonard Cohen’s ‘The Future’. Dark, grave, and equally dense with imagery it seemed to offer a sharp contrast while still deploying a sly wit in some of the video’s choices and juxtapositions. The mystery of Laibach endures. Avant garde provocateurs or kitsch joke? Why not both? Laibach contain multitudes. On closer inspection they are more aligned than first appears, the message of Love Is Still Alive an echo of Cohen’s “Love’s the only engine of survival.”

If eight versions of the same tune looks unpromising on paper Laibach spins the initial song out into an extended, largely instrumental, suite gliding out into the vastness. It doesn’t brashly genre hop but steadily unfolds with the lightest of touches, elements dropping out or evolving so by the time we reach the lengthy ‘Love Is Still Alive IV (Neptune, Oxytocin)’ the brushed snares and boom-chicka guitar have become twitching drum machine beats and wild garage organ, the vocals phased out loops. It winds down to an atmospheric hum and the second half of the EP is looser, weightlessly drifting in the cosmic ambience, rhythmic and melodic moments passing by on their own idiosyncratic orbits. At ‘VII’ there is little more than the sighing of a celestial choir, joined for the final part by the deep voice of Milan Fras softly intoning the lyric once more as lone notes twang out into the void. Brave comrades, we are floating in space.